Kino // Unrated // December 13, 2011
List Price: $34.95 [Buy now and save at Amazon]
Review by Stuart Galbraith IV | posted December 24, 2011 | E-mail the Author
Instead of the creaky relic I was expecting, the 1922 silent film of Sherlock Holmes turns out to be pretty good overall and even more interesting for its cast and production. It was adapted not from one of Sir Arthur Conan Doyle's stories but rather from writer-actor William Gillette's famous 1899 play, which introduced much of the iconography that's been part of the Holmes canon ever since. The second Basil Rathbone Holmes movie, Adventures of Sherlock Holmes (1939), also claims to be based on Gillette's play, but beyond the fact that both include Holmes's archrival Professor Moriarty, the resemblance is almost nonexistent. The 1922 version, however, appears to follow the play quite closely.

Sherlock Holmes was thought lost for decades but eventually resurfaced and was partially restored in the mid-1970s by Kevin Brownlow and William K. Everson with, amazingly enough, input from the original film's director, Albert Parker (1885-1974). The George Eastman House undertook a second restoration in 2001, partly financed by Hugh Hefner, and that's the source of this impressive video transfer. (Some of the intertitles even note "George Eastman House, 2001," in the lower right-hand corner.) Kino's Blu-ray looks great, with the original film elements in shockingly good condition when one considers this once-lost film is nearly 90 years old. No extras, apart from high-def trailers for three other Kino releases. 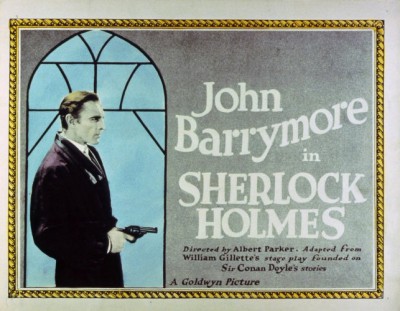 The film begins with Sherlock Holmes (John Barrymore) and John Watson (Roland Young, in his screen debut) as students at Cambridge. There, the younger Holmes comes to the aid of Watson's school friend Prince Alexis (Reginald Denny), accused of a theft actually engineered by Professor Moriarty (Gustav von Seyffertitz) to extort vast sums of money from Alexis's royal family. Thanks to Sherlock Holmes and his persuading conspirator Forman Wells (William Powell, also making his screen debut) to turn against Moriarty, the master criminal is defeated.

However, the prince's two older brothers die suddenly, making Alexis next in line to the throne. Because of this he's forced to break off an engagement with British commoner Rose (Peggy Bayfield) and she promptly jumps off a mountain, killing herself. Several years later, Moriarty tries to blackmail the now-engaged prince with his scandalous love letters to the tragic Rose.

Sherlock Holmes was one of those London After Midnight-type Holy Grails of silent cinema - until, that is, it was finally found and audiences discovered it wasn't everything they'd imagined it to be. Most of the problems seem rooted in the adaptation and its fidelity to the original play. Gillette took many liberties with Holmes (with Arthur Conan Doyle's blessing, however), most notably marrying off Holmes at the end. Apparently the play also portrays Holmes as more the dashing, romantic hero than the pure, eccentric intellect sometimes sorely lacking in people skills, and this too is carried over for the film version. Others complain that the movie is too stagy and talky (i.e., too many intertitles), but none of this bothered me, particularly.

The bigger problem is that it has no understanding of the Holmes-Watson relationship. Watson's warm humanity is meant to contrast Holmes's frequent aloofness, with Watson often serving as a kind of buffer between Holmes and his clients, particularly young, distressed women. Watson reins in Holmes's excesses, sets him right when his lack of understanding and empathy toward everyday human emotions fail him. And Watson is there to provide his expertise as a physician (demonstrating that there are some things even beyond Holmes's abilities) and to back him up should things turn violent.

None of this is in the film. With Holmes already so humanized, Watson is like a third wheel, even more so as Holmes falls in love with Rose's surviving sister, Alice (Carol Dempster). Further, Holmes's extraordinary powers of observation and deduction aren't on display all that much; he's skilled, but doesn't come off as an intellectual giant, surpassed in this regard only by his smarter and mysterious older brother, Mycroft.

Nevertheless, there's much in Sherlock Holmes to like. Barrymore, who had a great tendency to overact in his talking pictures, is quite subtle here and, as one might expect, looks exactly right, as if stepping out of Sidney Paget's Strand magazine illustrations. Roland Young also makes a fine if obscenely underutilized Watson. It's also a bit strange to see 34-year-old Young so, well, young, especially in the Cambridge scenes where he's got downright bushy hair.

But where Young isn't all that far removed from his later, more familiar screen persona, it's downright jarring to see suave William Powell pasty-faced and bug-eyed in Sherlock Holmes, looking rather uncannily like The Office's Dwight Schrute (!), and spending much of the film playing a skittish Renfield-type.

Part Nosferatu (with hair), part Ebenezer Scrooge, von Seyffertitz's Moriarty is heavily made-up but effective, more monstrous than the oily charmers of the Rathbone era (Lionel Atwill, George Zucco, et. al.). Hedda Hopper, later the famous Hollywood gossip columnist, is also in the cast as one of Moriarty's agents. Aficionados of silent cinema tend to be harsh assessing the talents of Griffith leading lady Carol Dempster, but in this I found her pretty and perfectly adequate.

A Goldwyn Production, Sherlock Holmes has the unusual distinction - I can't think of another Hollywood production that did this until Billy Wilder's The Private Life of Sherlock Holmes in 1970 - of having been partly shot on location in England and possibly even Switzerland. From what I can tell, it's all second-unit work, with the stars carefully and impressively doubled in long shots. (Bayfield appears in the mountaintop suicide location scenes, however.)

In any case, the footage of London circa late-1921, including an opening aerial shot and much footage taken from moving cars and otherwise on London's busy streets, is fascinating stuff, particularly watching this well-preserved footage in high-definition.

Sherlock Holmes looks great throughout. Many silent films, such as Way Down East, cull multiple film sources of varying quality, but this is consistently excellent. Kino is to be commended for their ongoing policy of resisting the use of DNR and retaining scratches and other minor imperfections in the surviving film elements in order to retain the film-like look. Up close and on a big-screen TV, the image has an eye-pleasing film texture. One oddity: perhaps to stabilize the image and/or hide frame lines, slight and bouncy black borders occasionally intrude at the top and bottom of the frame, but these are but a mild distraction. The 85-minute film is shown at the proper speed, and Ben Model's theater organ score fits the material. No Extra Features.

Purists may cry foul but I found Sherlock Holmes a fascinating little film worthy of a purchase. Recommended.