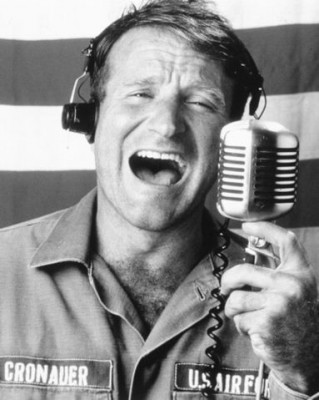 Good Morning, Vietnam is a multi-layered story that is one part anti-war, one part pro-army, and one part a simple story of a man who was worth more than he would ever realize. This story centers upon Adrian Cronauer (Robin Williams), a radio DJ for the American soldiers during the War in Vietnam. The show becomes a huge success, in part because he makes his voice fluctuate like a staircase going towards the moon every day in the early morning. Then there was the fact that he was funny - extremely funny - and unlike anyone else in radio. That was just the beginning.

Adrian gets caught up in a world of petty radio politics where he isn't allowed to freely express his thoughts and observations on the terrors of the war surrounding him. Then there's the fact that he is supposed to report in about what music he plays so that any questionable music like "The Beach Boys" doesn't wind up being played for soldiers in Vietnam. Adrian doesn't play by the normal rules and becomes a huge radio success. Countless fan letters begin pouring in for his entertaining show. He becomes a hero, bringing hope and encouragement to those faced with unquestionable challenges in everyday moments and by speaking the truth where it mattered most.

The character befriends a Vietnamese student named Tuan (Tung Thanh Tran) and falls for his pretty Vietnamese sister Trinh (Chintara Sukapatana). This leads to a heaping of trouble for him with his superiors in charge. But it's clear that the Adrian character demonstrates a compassion for human beings of all races, and isn't one to stand by while terrible atrocities take place around him. He might not always win the good fight but he is someone who has enough courage to share his voice where he feels it must be heard. 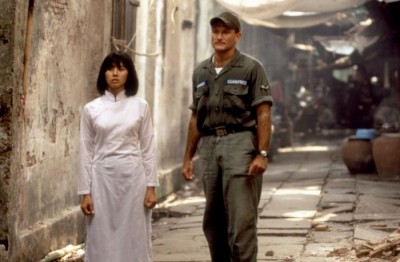 The film demonstrates the unmistakable possibility of one person making a difference capable of impacting the lives of many individuals on a grand scale. Without even the slightest inner-recognition of the difference he is making, Adrian impacts those that in everyday life surround him: Edward Garlick (Forest Whitaker) is especially impressed, inspired, and pleased with what he sees happening with the radio show. Then there's another funnyman Marty Lee Dreiwitz (Robert Wuhl), who seems to find him hilarious, perhaps even more so than he finds himself. Of course there's always that Lieutenant Steven Hauk (Bruno Kirby), trying to put a stop to the humor and an anti-war tone in Adrian's unique approach.

Robin Williams is an under-appreciated actor who has remained as such even despite having an eventual win for Best Supporting Actor in Gus Van Sant's Good Will Hunting. Ask anyone "What's your take on Robin Williams?" and I would imagine most responding with something entailing "He's a funny guy!" He is... Yet he is also capable of delivering so much more than comedic excellence with his acting. He is one of my favorite actors and the role he received and delivered on in Good Morning, Vietnam is easily one of his career defining performances. He can perfectly blend together the comedic and dramatic requirements of the role in a way that is both rare and important. It has helped this film to stand the test of time. The film is as good as it is because of Robin Williams' ability to carry it to the finish-line.

Good Morning, Vietnam would have been a solid film without the brilliant lead performance by Williams but it wouldn't have been anywhere near a truly great one and that is exactly how solid this wonderful experience turns out to be. It's as moving and important as it was when originally released twenty-five years ago. I never did get to see it in the theater: I wasn't born yet! I can say that I have experienced this film multiple times over the years and each time it has become even more meaningful and worthwhile as a film to experience. Consider it an essential viewing for fans of great cinema. 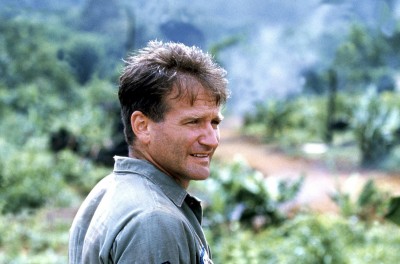 Good Morning, Vietnam doesn't receive as glorious a High Definition presentation as the film deserves. The film is presented in the proper aspect ratio of 1.85:1. The 1080p Widescreen image isn't terrible by any means but it isn't something that delivers on every level. There are excessive moments of DNR that has been applied to its transfer and it definitely lowers the overall experience down a few notches. The colors are also decent if somewhat weak in parts. Then there's the fact that the film clearly hasn't received a full-blown restoration job. While the negatives of the presentation are disappointing to behold this is still an upgraded presentation over the previous DVD edition.

The audio doesn't fare too well either as the 5.1 DTS-HD Master Audio track isn't capable of being a showstopper. The entire audio presentation is front-heavy with little emphasis given to the surrounds. This isn't really that surprising given the age of the film but it'll disappoint regardless of expectations. The track does properly reproduce the dialogue with crisp clarity that improves upon prior editions. The bass is also decent enough when it needs to be given what is happening in a scene. Subtitles are provided in English SDH (for the deaf and hard of hearing) and French.

Good Morning, Vietnam has a decent selection of bonus materials but none of them are new to this edition. These extras were all ported over from a previously released Special Edition DVD.  Each extra on this release is presented in full frame only and despite indication of an AVC encoding on each bonus feature one can hardly distinguish much difference for the PQ. Everything looks SD (Standard Definition). The PQ is never that great and on the theatrical trailers things looked absolutely abysmal.

The main extra is the decent-length & quality Production Diary (34:32), broken down into several sections as noted below. Each segment provides interview clips that shed some light on various aspects of the film pre and post production. Learning the origins of the film was particularly insightful and entertaining. It seems worthy to note that no studio wanted to make a Robin Williams movie that wasn't straight-comedy until Disney agreed to produce Good Morning Vietnam with the blend of drama and humor the filmmakers had wanted to create from the start. Many more interesting factoids and opinions are included. Director Barry Levinson offers some of the more peculiar details of making the film with Williams. 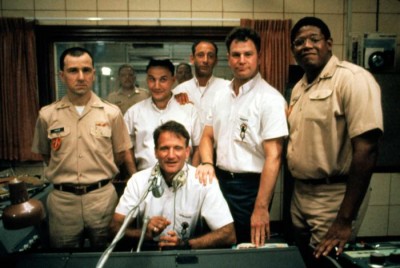 Good Morning, Vietnam is a powerful film with a remarkable performance by the multi-talent that is Robin Williams. The film offers one of his finest leading roles featured throughout his on-going career. While another screenwriter, director, and star could have made an entirely different movie out of this premise the work of Mitch Markowitz, Barry Levinson, and Robin Williams was well matched. The Blu-ray isn't as good as the film itself but is still worthy of consideration at a reasonable price-point for all serious fans. Highly Recommended.