Don't Let Him In 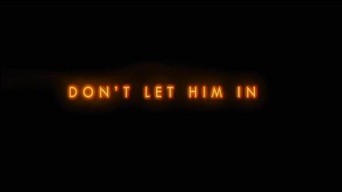 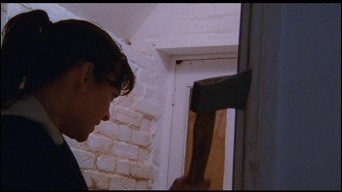 A year or so ago, a friend e-mailed me a link to a funny YouTube video where a user stitched together a montage of cell phone scenes from horror movies. You know the type of scene, the obligatory explanation for why characters in a 21st Century horror movie can't just phone for help when they're in trouble or being menaced. I was reminded of this montage while watching the recent thriller / borderline "torture porn" Don't Let Him In. This English import, now available Stateside courtesy of Image Entertainment, is entertaining enough, though its breezy 79 minute run-time manages to jam in quite a few really dumb cell phone scenes to explain away why four capable adults would not call authorities over their weekend camping trip gone awry. The script finally resorts to the "lack of signal" routine, even though cell phone reception seemed fine in a couple dozen previous scenes.

I'll get to the specifics about this film below; however, the most memorable sequence in this film is when a stranger appears late at night at the lonely cottage house of the protagonists. He's bleeding profusely courtesy of a rather nasty stab wound that requires multiple stitches. The train of thought that keeps the four main characters - one of whom is a nurse, for heaven's sake - from calling an ambulance or the police over the next 24 hours has got to be a new record in absurdity for a relatively serious-minded horror flick. I'll let the details be a surprise, should you choose to let this horror film in, but yeah, screenwriters can get really hung up (ahem, no pun intended) on explaining away the natural impulse to pick up the mobile device du jour to keep a plot moving. 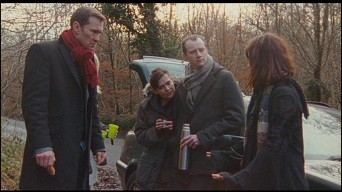 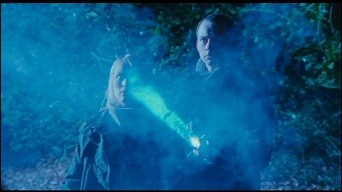 I promise not to mention cell phones again for the rest of the review - Don't Let Him In just had a bunch of annoying logic collapses around those devices that bugged me. It's out of my system now. In any case, this British production tells the story of four young adults who decide to take a weekend sojourn to a family cottage out in the middle of nowhere. Nice couple Paige (Sophie Linfield is fine as the character the opening credits sequence foreshadows to be the requisite slasher film Final Girl) and Calvin (Rhys Meredith) invite Calvin's promiscuous sister Mandy and, reluctantly, her recent one-night stand Tristan along. Tristan is a shady character, who is clearly trying to "stay low" for a little while due to some kind of criminal activity revealed later in the film.

The foursome don't get along real well - Paige and Calvin's nice couple routine doesn't gel well with Tristan's testiness and Mandy's stupidity. This alone would have been enough for 90% of the world's population to call off the weekend getaway. But not these guys. Heck, a wandering gypsy, a creepy hitchhiker, and a too-genial police officer, two of whom offer warnings about bad goings-on in the woods, don't keep these stubborn vacationers at bay.

So, despite graphic tales about a serial killer on the loose in the nearby area dubbed The Tree Surgeon due to his penchant for cutting up his victims and tying them to trees, the intrepid quartet carry on with their plans out in the woods. Needless to say, things don't turn out well for them.

I'll admit, Don't Let Him In doesn't work well in terms of character motivation and logic - but its graphic intensity and occasional dark humor flourishes won me over. Both qualities work in tandem, especially in a surreal flashback, told by the police officer, of how a group of young school girls and their teacher happen upon the remains of one of The Tree Surgeon's victims. I won't reveal who turns out to be The Tree Surgeon - but the actor's performance is so over-the-top during the film's final minutes that it borders on maniacal comedy. He's actually quite good - and the climax is suitably grisly and borderline slapstick (considering the unexpected and accidental death of a minor character).

As mentioned before, at 79 minutes, the film is fairly quick-paced, although it doesn't sacrifice developing its characters (perhaps it should have, in this case) for its scares and gore (of which there are plenty in the second half). I liked it - despite its faults - though I'd only recommend it to horror fans. Image Entertainment provides a couple good extras (more on those below) that help further seal the deal. 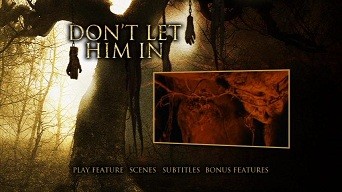 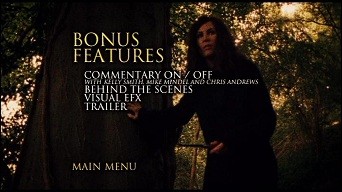 Image Entertainment provides Don't Let Him In an anamorphic widescreen presentation with a 1:85:1 aspect ratio. The movie, as the extras reveal, was shot on 16 MM and it looks it - but the visual quality compliments the rough grindhouse feel director Kelly Smith found inspiration from.

Curiously, Image Entertainment, on the back cover art, advertises two audio tracks: Dolby Digital 5.1 Surround and 2.0 Stereo. This is technically accurate, but the 5.1 Surround is the only actual movie track. The 2.0 track refers to the commentary track (more on that below). In any case, the 5.1 track is solid, with dialogue always clear. Optional subtitles are available in English SDH and Spanish.

For a small-budgeted film, Don't Let Him In gets an unusually generous helping of extras. The best of the bunch is Behind the Scenes (41:22), where co-writer and director Kelly Smith offers a personal account of the genesis and making of his first feature-length film. Smith seems like a personable guy, and his enthusiasm carries over on the aforementioned commentary track - where he is joined by co-writer Chris Andrews and co-producer Mike Mindel for an informative overview of the movie.

Less noteworthy are a too-brief Visual EFX (1:16) featurette, with some quick before and after effects shots, and a trailer for Don't Let Him In itself.

Some logic issues plague Don't Let Him In, but this lean and mean English thriller should still be invited in to the homes of horror fans, especially those with dark humor sensibilities. Recommended.