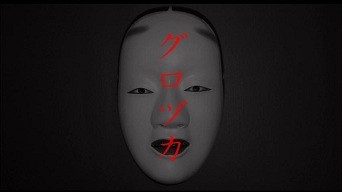 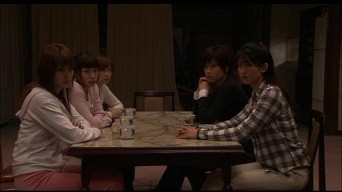 As part of its growing Asian Cult Cinema Collection line, Synapse Films has just released the tame (relative to its subgenre) 2005 J-Horror title Gurozuka directed by Yoichi Nishiyama. Anytime I review a foreign title without an English language dub (as Gurozuka's DVD is packaged), I feel obligated to start off by acknowledging that fact. Reading subtitles doesn't bother me, but I know many film enthusiasts who refuse to do so. If you fall into that camp, this first U.S. home video release of Gurozuka just is not for you. 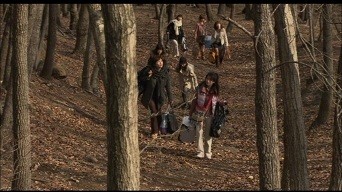 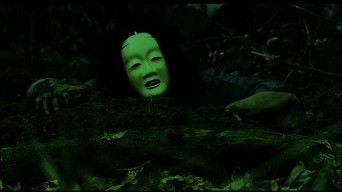 Synapse's back cover blurb for Gurozuka likens it to such horror film classics as The Ring and Wes Craven's Scream. The comparisons are fair in terms of Gurozuka's plot, but let's be honest, the movie is nowhere near those touchstones in terms of quality.

Gurozuka tells the tale of a small group of young female students (it wasn't particularly clear if they were high school or college-aged) who reform a dormant movie-making club. It seems that seven years earlier, the original members of the club were filming out in the woods when one disappeared and another went insane. In any case, two members of the now-resurrected club find 8 MM footage from that earlier shoot showing a woman in a deigan mask killing another member. Displaying typical horror movie logic, the girls decide it would be a great idea if they all motored over to the creepy abandoned lodge in the middle of nowhere where this footage was shot to do their own filming. So, with their teacher Ms. Yoko - apparently a member of the original club when she was younger - in tow as a chaperone, they pack themselves into a van and drive off. Surprise of surprises, things do not go well for the pack of amateur movie makers - as they're menaced, eventually, by a figure in a blood-stained deigan mask similar to the one in the 8 MM footage.

So yeah, the set-up of Gurozuka reflects The Ring with its haunting video (the girls transfer the 8 MM film to videotape to show the others) and Scream with its film-obsessed characters. Its premise is solid, albeit derivative, and the killer's deigan mask is simple yet effective in design, like a lot of slasher film antagonists' masks over the years.

However, the film itself was a bore for a good chunk of its running time. I'm always in favor of character development in horror films, an aspect that many choose to ignore, but Gurozuka expends too much emphasis on the girls' bickering and in-fighting. The all-female cast themselves are fine, but the script makes their characters out to be largely unsympathetic. Watching girls squabble over who may or may not be a lesbian, or one feeding another poisonous mushrooms in retaliation, just does not build much sympathy. And, it takes way too long for the masked figure to do much menacing outside of quick jump scares and momentary "nightmare" moments. This is a horror film, after all. That's one of the reasons I used the adjective tame to describe this film in the opening paragraph. Some bloodletting does occur, sometimes off-screen, and the finale is suitably intense - but it's a far cry from the gruesome opuses J-Horror fans may be accustomed to. The film is not rated, but I didn't think the violence here rose much above PG-13 levels.

So, over all, Gurozuka does offer up some tense moments, but its build-up is too slow and its characters unengaging. Horror hounds who are really into Asian fare may want to check it out - but this import is definitely for cult audiences only. Rent it, if you're curious. 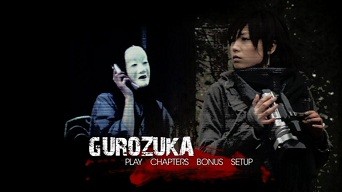 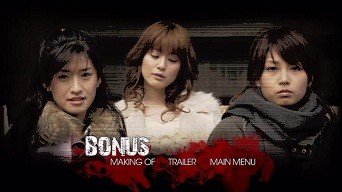 The lone audio track is a lean and mean Dolby Digital 2.0 Stereo affair in the native Japanese language. Dialogue is always clear, but the film's score comes off as aggressively overbearing, especially in scare and action scenes. Optional subtitles are available in English.

The main extra is a Making Of featurette (23:01) that focuses on the all-female cast members as they joke around on set and at the after party. They also complain about the cold weather (the film was shot in February around Valentine's Day) and a flu that was going around. Subtitles are provided, and the extra is in a 1.33:1 aspect ratio. In addition, the DVD has a trailer for Gurozuka itself.

Synapse Films may be correct in advertising the latest addition to their Asian Cult Cinema Collection, 2005's Gurozuka, as being "in the tradition of Scream and genre-bending Japanese classic, The Ring" - but perhaps there's a reason that it took seven years for this import to make its way to the United States. The plot is fairly derivative. Some effective scares are present in the finale, but the film needed more from its deigan-masked antagonist and less from its unengaging characters. Still, cult fans of J-Horror may want to check it out, so I'll go with a "Rent It" recommendation.