Shout Factory // Unrated // April 22, 2014
List Price: $34.93 [Buy now and save at Amazon]
Review by Stuart Galbraith IV | posted May 15, 2014 | E-mail the Author
Shout! Factory, working with Sony, has amassed a marvelous package of cartoons in Mr. Magoo: The Theatrical Collection, an assemblage of every one-reel theatrical cartoon featuring Mr. Magoo (voice by the irreplaceable Jim Backus) produced by United Productions of America (UPA) from 1949-1959, 53 in all. These highly repetitive but also visually dazzling cartoons, quite different from the more familiar Disney, MGM, and Warner Bros. house styles, rarely have been seen in their original form. But this practically perfect collection culls everything together in chronological order, presents them in their correct original aspect ratios (with 16:9 enhancement, where applicable), and supplements them with commentary tracks and other extra features.

Further, this four disc set also includes 1001 Arabian Nights (1959), UPA's first of two theatrical feature cartoons, and the only one produced by UPA's founders. It comes with a nice featurette of its own. 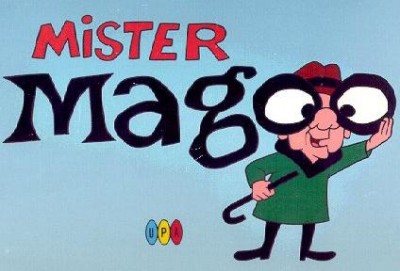 UPA was founded by John Hubley, Stephen Bosutow, David Hilberman, Zack Schwartz and others several years following the mass exodus of Walt Disney Studios animators who went on strike there for five weeks in 1941. Nearly half its animation staff departed, many of whom eventually wound up working for UPA.

Columbia pictures had little luck with its own animation division, Screen Gems, which they had acquired wholly in 1939. Although Frank Tashlin, Dave Fleischer, and Bob Clampett, among others, all worked at Screen Gems for a time, the cartoons Screen Gems produced were cheap (they continued releasing black and white cartoons as late as 1946, several years longer than any other studio), and their shorts were generally unmemorable. The closest thing Screen Gems had to an ongoing success was their "Fox and the Crow" series. Remember those? Me, neither.

Columbia contracted with UPA to produce their cartoons from the late 1940s, while the Screen Gems name was reused for Columbia's newly founded television production and distribution division. The first shorts were two "Fox and the Crow" cartoons refashioned in UPA style, both of which were nominated for an Academy Award. Soon thereafter UPA came up with its two most endearing original characters, Gerald McBoing Boing (1950, "He didn't talk words…He went ‘BOING BOING instead!") and, beginning with The Ragtime Bear (1949), near-sighted crotchety senior citizen Quincy Magoo.

Until now the Magoo waters have been muddied by the character's longevity, first as the star of one-reel theatrical cartoons, then a full-length theatrical feature, then as the star of an original (and inferior) television series, then a series of TV specials (most famously Mr. Magoo's Christmas Carol), then another TV series (What's New, Mr. Magoo?) and finally a live-action comedy starring Leslie Nielsen. If memory serves some, perhaps all of the theatrical shorts were integrated at one time or another with one or both of the cartoon shows for TV, though those shot for release in CinemaScope surely would have suffered. Seen here, chronologically, the original cartoons are far more satisfying.

My six-year-old daughter found them amusing and bemusing. I, too, was surprised by many of the shorts' humor, often geared more for adults than children, and in many ways gleefully politically incorrect. In one short, Magoo Saves the Bank (1957), the nearly blind Magoo travels to what he thinks is his bank but which in fact is a racetrack where his "deposits" are actually long-odds bets that win again and again. Mistaking the mad rush of gamblers at the teller windows for a run on the bank, conservative Magoo pleads for calm, assuring the "bank's" customers of his intuition's solvency, while security guards, believing Magoo to be a tout, throw him out. Very funny stuff, but hardly The Three Little Pigs.

UPA's trademark was their innovative stylization, rooted in a kind of graphic minimalism 180-degrees from the look Disney (and, in the 1930s and early ‘40s), Max and Dave Fleischer were aiming towards: greater realism. This innovation extends to each short's opening titles, which are mini works of art all by themselves, especially in some of the later CinemaScope ones, with its screen shape providing a broader canvas.

Though highly repetitive (How many short comedies can one make about a grumpy old blind man?) even the weaker shorts are pretty amusing thanks to Backus's spirited performances; his "Get off my lawn!"-type, W.C. Fields-influenced outbursts are really something. Backus liked to tell the story of being beckoned by Marilyn Monroe to her dressing room during the production of Don't Bother to Knock (1952). Needless to say, Backus was most intrigued by her come-hither invitation until, once inside, Marilyn blurted, "Do Mr. Magoo!"

Mr. Magoo: The Theatrical Collection was originally announced for DVD release in 2012 but pushed back several times. This may have been to accommodate better video transfers and/or extra features, but regardless it's been worth the wait. There are a number of typos on the packaging concerning aspect ratios but those shorts shot for 1.37:1 standard size are in that format, those shot for 1.85:1 cropping are 16:9 enhanced widescreen, and those filmed in CinemaScope are likewise correctly presented. The color looks great and it's especially nice to see the widescreen shorts presented with the graphic compositions for which they were intended. The English mono audio is fine also. The shorts are presented over three DVDs, with the fourth disc dedicated to the feature 1001 Arabian Nights.

And, of course, there's 1001 Arabian Nights, an adaptation of the ages-old folk tales from the Islamic Golden Age and turned into an English-language volume in 1706. With Quincy Magoo. It includes its own making-of featurette.