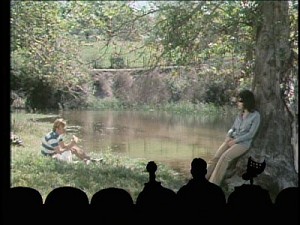 Shout! Factory, ever-devoted to cult TV, continues their release of "Mystery Science Theater 3000." The Touch of Satan is a meandering, muddled 1971 B-horror about a tricky witch living on an isolated farm, and its corresponding MST3K episode was previously released on DVD by Rhino Video, in the "Volume 5" box set, which is no longer in print. Now, Shout! Factory has gotten ahold of the rights to the film and are temporarily re-issuing it on DVD as part of their "Shout! Selects" line, available exclusively through their official website.

Touch of Satan (episode 908) isn't terrible, but it isn't all that remarkable either. The episode is a yin-and-yang scenario: as the riffing gags trail off a little, the host segments get better. The episode opens with the weakest of the segments, which has Servo and Crow demanding wassail, but dives right into the movie's cheesy '70s easy listening vibe with some some good singing gags ("What do you get when you fall from grace / You only get cast in-to perdition!"), and really gains traction with the dopey, gormless romance between Jodie (Michael Berry) and Melissa (Emby Mellay) ("Exciting?" "Exciting!"). Choice recurring gag: "This is where the fish lives."

Unfortunately, the movie's lack of quality really starts to take a toll on the riffers: the entire last third of the movie and the resulting riffs can almost completely be summed up by the movie's need to move faster. Touch of Satan slowly drops to a snail-like, watching-paint-dry kind of pace, and not even the gags are entirely effective in passing the time (although I do appreciate Robert Easton from Giant Spider Invasion popping up in the film, as GSI is one of my all-time favorite MST3K eps). The host segments become an oasis of goofy fun: Crow convinced he's a witch, and accidentally selling his to Stan Johnson instead of Satan. All things considered, it's just one of those episodes where the movie doesn't land in that sweet spot between providing plenty to joke about and not being so bad that its deficiencies are still apparent.

The DVD
Shout! Factory seems to have a template they use on these DVDs: film logo in red with a white border, next to the original one-sheet, 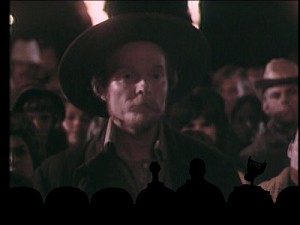 laid over the famous silhouettes and a star-field background, with the MST3K globe in the upper left. A blanked version of the starfield and silhouettes also appear on the reverse of the art, showing through the transparent plastic case.

The Video and Audio
Presented in 1.33:1 full frame video, the host segments look surprisingly rough for one of the later episodes of the show. The movie also looks exceptionally terrible, plagued by a faint "double" image that makes edges look like you're watching a 3D movie or something. Neither should distract at all from the comedy, but it's not a particularly pristine presentation. Dolby Digital 2.0 audio is strictly no-frills as well, with Mike and the bots bold and through the center channel, and the movie playing through the left and right. A strange, momentary audio glitch at 11:33 sends Mike through all three for just a second. No subtitles or captions are included.

The Extras
None. Rhino's disc included the trailer for Touch of Satan, and indispensible MST3K resource Satellite News seems to indicate that there might've been an introduction as well.

Conclusion If this is one of your favorite episodes of "MST3K," and you don't happen to own the "Volume 5" set with a couple of additional extras, maybe this is the release for you (worth pointing out that last time I reviewed some Shout! Selects, they were $20, and Shout! has since dropped them $5, and as I write this, they're on sale for $11.99 each -- a much more affordable price). Everyone else can probably give this a pass, or rent it at best.