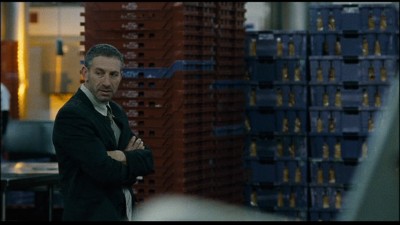 The basic idea behind The Human Resources Manager is that an employee of Israel's largest bakery winds up dead and no one from the bakery seems capable of acknowledging that her death might have been linked to her recent unemployment from the company. Furthermore, the human resources manager (Mark Ivanir) doesn't recall her working for the bakery and had no idea that she was even fired in the first place. This leads to a negative newspaper report, and the owner of the bakery enlists the human resources manager to figure things out and clean up the company's miserable PR mess by helping to transport the body to a place of proper burial with an actual hometown funeral and with his attendance of the funeral himself.  This task of duty begrudgingly seems followed but the impact of the journey taken by the human resources manager is a journey of true self discovery.

The events of the film are not altogether surprising in regards to what happened to the girl who worked at the bakery. What happened turns out to be sad, confused, and unfortunate. Yet the consequences are not necessarily the direct fault of one person (though some could argue that it is - just watch and see), but regardless of what led to her unfortunate passing, the consequences in how it impacted other people was surprisingly poignant. The employee should have never died or even been laid off in the first place but the journey taken to have her funeral be properly handled winds up leading to the human resources manager gaining a better understanding of his own life, and it helps to bring together family members who had been in a lost state of mind before being reunited to recognize the importance behind losing a treasured loved one. This element of the story is particularly important to her son "The Boy" (Noah Silver) who gains a better connection to his emotions that should help to guide him into a better and brighter tomorrow even amidst the huge loss he experiences. Along the way, there is also a reporter who tags along for the ride to observe the human resources manager and who makes an unlikely bond with him, to some degree, over the course of the film. 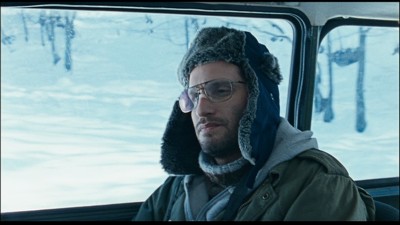 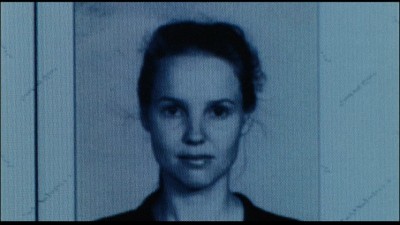 The Human Resources Manager is gripping in a way that few films are. It approached ideas of morality in the workplace without really being about the workplace. Instead, this story is about the mistakes and ignorance some people make and how we can overcome moments like these and move forward in life.

The film is humane and intently focused on examining the relationships between people in a way that is relatable, darkly humorous, and entirely emotionally resonant. The characters of this story are quirky and strange in some ways - there are moments that I thought this film could possibly be the result of an Israeli filmmaker being massively influenced or inspired by Wes Anderson but the humor and pathos was unique enough to suggest the filmmaker was working within his own distinctive knowledge base of film techniques.

There are so many wonderful aspects to this production. The Human Resources Manager manages to be beautifully well made as an effort with remarkable direction by Eran Riklis, hauntingly powerful score music by Cyril Morin, and with a screenplay offbeat in style but that wisely remembers the importance of placing the drama element first with this kind of story. The cinematography by Rainer Klausmann is also perfectly in tune with the themes utilized and it leaves an impression of solemnity that perfectly accompanied the project. This film was wisely chosen as the lone entry by Israeli for the Academy Award for Best Foreign Language Film. While it didn't make the short-list and become nominated it has earned its place as one of the year's best overall efforts. 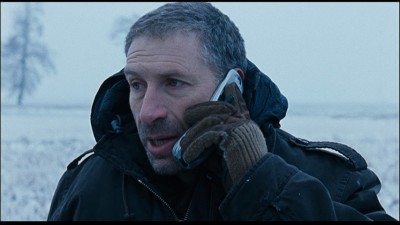 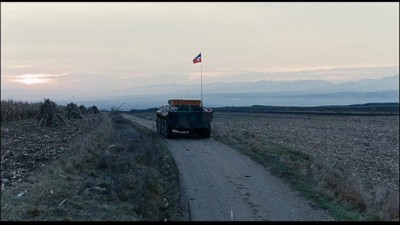 The Human Resources Manager is presented in its original theatrical aspect ratio of 1.85:1 with anamorphic widescreen enhancement. The presentation has decent color reproduction (the cinematography evokes a subdued color scheme approach with an icy coldness that is possibly intended to represent the grief and sadness of a richly thematic character journey). There is a somewhat heavy layer of film grain present. It isn't particularly distracting, but it demonstrates the low-budget nature of the production. The image seems free of having any noticeable compressing problems and has decent sharpness. The PQ won't really be able to have a "WOW" factor for anyone but it shouldn't disappoint when recognizing the limitations of the budget.

The film contains the original Hebrew language audio track with English language subtitles. The audio is presented with 2.0 Dolby Digital - the sound of the film is incredibly quiet for most of the experience but the dialogue is easy to understand and the quiet ambiance has been well reproduced. 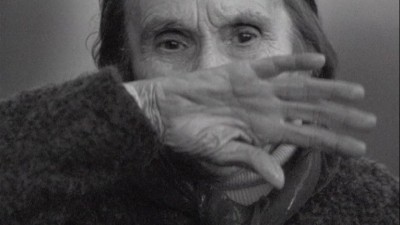 Film Movement includes a monthly short film. This month's selection is entitled Tell Your Children and was directed by Andras Salamon. The short focuses on the holocaust horror. The story centers on a young girl's experience surviving the terror of such an experience and demonstrates her having a moment of strength against nazi's as an old woman who understands the importance of overcoming difficulties with strength and courage. This is certainly a worthwhile short film with a solid message. The directing seemed unfocused though and the camera work was a bit difficult to follow. It still manages to convey the message in an undeniably powerful way.

This release also contains trailers for other Film Movement releases and information on the lead actor Mark Ivanir and director Eran Riklis. 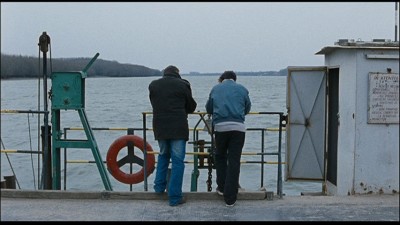 The Human Resources Manager is a beautifully told story of redemption, reinvigoration, and the strength of the human spirit. It features a powerful performance by Mark Ivanir and has direction that is complex in approach. This film is a remarkable surprise: perhaps one of the very best of the entire year. Highly Recommended.