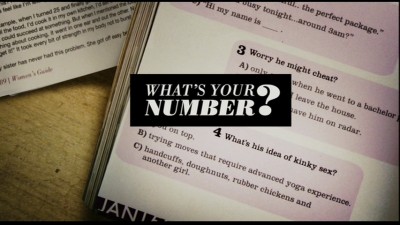 What's Your Number? is a romantic-comedy with an interesting premise that promised a lot of comedic potential. The story focuses on Ally Darling (Anna Faris), a recently unemployed marketing person (who has almost no interest in the subject), who stumbles upon an article in a magazine that claims most women have 10 partners in their lifetime before finding "The One"... she looks at the number and thinks "That low?" Ally decides to make a list with every guy she has ever slept with. Her number is: 19. She then becomes determined to sleep with no more men until she finds the one who will marry her. Unfortunately for her, she ends up sleeping with her ex-boss (Joel McHale), who isn't exactly high on her priority marrying list (you know, should she actually have one).  Her new mission becomes to seek out every ex she's ever dated to see if she can find her future husband with a past mistake! Um... yeah. Good luck with that.

Joining Ally in her new quest to find a future husband by revisiting some past-relationship-failures is the hunky dude across the apartment-floor Colin Shea (Chris Evans), who is an attractive muscle-ripped womanizer who has a one-night-stand every day (or is it night?), and who becomes quick to befriend Ally despite her insistence that she won't be sleeping with him. Colin has the know-how to track down all of her ex flames and he does exactly that. Ally and Colin have great chemistry together despite the fact that he sleeps with a different woman every night and she is determined to not sleep with another man ever. Naturally, all of this makes one wonder who she might wind up with by the end of the movie. Sarcasm then enters the room.

The movie follows almost every cliché in the romantic comedy genre. Both screenwriters, Gabrielle Allan & Jennifer Crittenden, seem to have a good understanding of the basics in rom-com territory. To their credit is the fact the movie is never exactly boring despite its predictability. The characters do toss out some surprising jokes and occasional vulgarity, unusual for this type of film, but the actual plot structure is no different from lots of the films in this genre... to the point where it just feels like a retread: A long and uninvolved retread.  You constantly have a strange feeling of deja-vu. I feel like I have watched this movie too many times already and the characters aren't distinctive enough to make this particular story stand apart from the already crowded street of other disingenuous rom-coms. 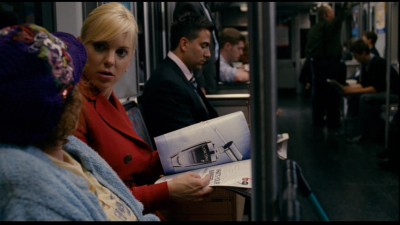 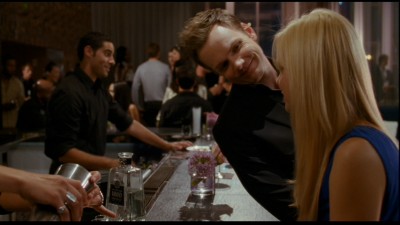 Despite the lack of truly interesting characters the best element of the movie is the lead performances. Anna Faris continues her trend of being unbelievably charming, cute, and inherently likeable in a mediocre movie. Chris Evans turns out to be a well-cast charmer with enough nice-dude-vibes despite the scripted element of being someone who sleeps with different women constantly... Ally hopefully realizes that if she ends up being with charmer Colin she'll want strict STD testing. He was sleeping with another woman the previous night... and countless other women all of those other previous night's too. Just thought it seemed worth observing this aspect of the potentially sad sequel.

Production-wise... what's there to say? It's a glossy looking movie. It has what most call "Hollywood" production values. It's all so unimaginative though. It doesn't feel creative. There might be high-end qualities contributing to this movie's success but it feels like it might have been done through obligation more than it was done in a quest for artistry.

The weakest and most disappointing thing about this movie is that it is supposed to be comedic. It isn't anywhere near as funny as it wants to be. The movie has big cuteness factors but the jokes seem to constantly fall flat. There wasn't a single moment during What's Your Number? where I laughed out loud. That's hardly a reaction most viewers would want with a comedy.

This wasn't exactly a successful movie. It was too "by-the-numbers" to stand out with genuine distinction. It does feature cute performances by Anna Faris and Chris Evans. Somehow the premise manages to keep things interesting from beginning to end but nothing really makes much of an impression by the time the credits begin to roll. See this if nothing else is on TV. It's decent, cute entertainment, but nothing more than its bunny-inspired fluff. 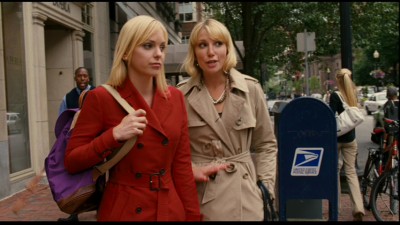 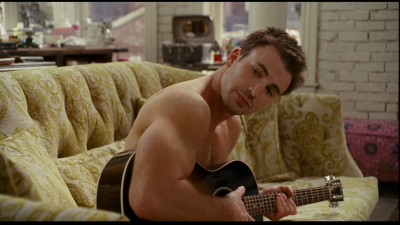 At least the film looks great on Blu-ray. Guys will be pleased with the adorable Anna Faris in High Definition while Girls won't mind seeing Chris Evans wrapped up in nothing but a small towel... also in High Definition. The film is presented with a 1.85:1 AVC transfer with a bit-rate average of 30 MBPS. This translates to a pleasant image with good color reproduction, strong resolution, and other elements of sparkling clarity throughout. The film looks totally modern with no hint of glaring print-problems or the like. It's a good preservation of how What's Your Number? surely looked in the cinema.

The audio presentation isn't quite as pleasant. It's a nice, clean, dialogue-friendly 5.1 DTS-HD Master Audio experience but the surrounds aren't used as effectively as one might be expecting. The occasional sound effect is used and the music is slightly enveloping but it mostly stays as a front-heavy mix.

This release also contains English Descriptive and French Audio in 5.1 Dolby Digital. Subtitles are included in English (SDH) for the deaf and hard of hearing and Spanish.

Please Note: The Images in this Review are from the DVD edition of the Blu-ray/DVD Combo Pack.

The main extra is an extended version of the film that runs a total of 1:57:14 (a decent bit longer than the theatrical version -- which clocked in at 1:46:13). The extended cut is simply more of the same but it is worth watching if you are going to experience the film.

Deleted Scenes (17:05) are presented in AVC but the PQ was clearly affected from these clips being taken from unfinished sources. There are a few scenes included here, but it's a guess as to why anyone would want to watch so many deleted moments from an already long "ex-tended" comedy.

Gag Reel (AVC, 7:15) has a number of clips of cast/crew members joking with regards to their own "number". The rest is the cast/crew slipping up but it's not really that funny. It's worth noting that Chris Evans seems to have the biggest potty-mouth of the bunch. This is Funny? 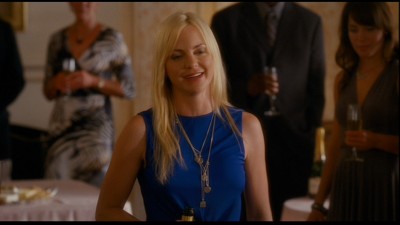 It might be rental-fare for those who are curious but something tells me that most would enjoy it as a late-night binge-TV viewing. What's Your Number? has cute leading performers and a fun premise but what it does with these aspects doesn't seem worth the time that is spent. Sadly, this was just another disappointing Anna Faris comedy. Rent It.