The first few scenes of Rikidozan: A Hero Extraordinaire are a good indication that this film doesn't take the contrived, inspirational route of most sports bio-pics. Opening in a Tokyo nightclub in 1963, our first shot of the "hero extraordinaire" of the title are of a drunken, bloated man stumbling his way onto a stage to sing. While it isn't too unusual to have the protagonist shown in a sorry, confused state (see: Raging Bull), this Korean production goes out of its way to show the long, slow and steady decline of its subject. That, to me, is a good thing.

Rikidozan (1924-63) was Japan's equivalent of Hulk Hogan during his '50s peak, a towering figure who brought a nascent, TV-friendly sport to a generation of Japanese desperate for a commanding, virile hero to emulate. Although pro wrestling back then was a far cry from the overwrought, soap opera-like antics of today, there was still a fair share of showmanship and flair attached to the sport. As played here by actor Sol Kyung-Gu, Rikidozan is seen as a driven, charismatic and strong athlete. Publicly he was the epitome of suave confidence, but the man was also haunted by inner demons. According to this lushly produced biopic, the defining aspect of his life was his insecurity and paranoia - stemming from the fact that he was a Korean masquerading as Japanese (in a country that harbored a cultural disdain for Koreans).

Following the boozy nightclub intro scenes, Rikidozan goes into flashback mode documenting his early years as an aspiring sumo wrestler in a Japan savaged by World War II bombing raids. Rikidozan is a young student in an esteemed Sumo school, one who gets constant grief and torment from his classmates for his apparently gauche Korean blood. As if working his way through the punishing routines at the Sumo facility were bad enough, he has the prejudice of all those around him to deal with. This comes to a head when the local police storm the academy and accuse Rikidozan of theft. After the cops chase the man through town, he breaks into a defiant rendition of his national anthem with all the townspeople watching in disbelief. This impulsive burst of patriotism impresses the school's wealthy sponsor, Mr. Kanno (Tatsuya Fuji). While all this is transpiring, he falls for and eventually marries the comely Aya (Miki Nakatani), a musician in the local geisha house. 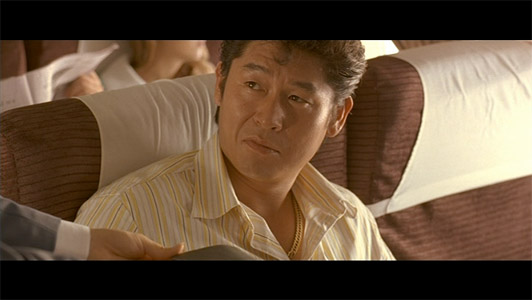 "Being true to oneself, despite what everyone else thinks" is the guiding theme in this film. It's never so plainly demonstrated than in the scenes following Rikidozan's rejection for a sought-after spot on the sumo wrestling team. The Rikidozan who emerges here is something of a stubborn, impulsive fool - but he's Korean, dammit! Korean star Sol Kyung-Gu, who gained weight and learned Japanese for this role, does a great job conveying the guy's constant anguish and torment. Bruised and with nowhere to go, Rikidozan's chance encounter with a muscle-bound hood at a bar brings him to a training facility for a new sport - pro wrestling. Finding himself skilled at body slams and choke holds, he approaches his old mentor Kanno to sponsor a trip to the U.S. to make his mark in this new, TV-friendly field. Although Aya tearfully disapproves and stays behind at home, his tour in America proves to be a great success (as shown in an incredibly cheesy montage).

Returning to Japan, Rikidozan's career is brought to the next level by Kanno and his eager young assistant, Yosimachi (Masato Hagiwara). Staging a well-publicized bout that became Japan's first live TV telecast, Rikidozan and a partner were faced off with a pair of formidable American wrestlers. This main fight scene is excitingly staged and period-correct, underscoring the fact that in a single night Rikidozan emerged as a cultural hero for the war-weary Japanese. He becomes a phenomenon in short order, but it's a strange success built on illusions, starting with this Korean man being marketed as a Japanese alpha-male. Morality-wise, it's all downhill from there. The increasingly insecure Rikidozan is shown attempting to throw matches, treating his wife terribly, and descending into smug complacency while newcomers arrive to take his place as the reigning champ.

This was a good, meaty film that ventures in a most unexpected direction. Director/writer Hae-sung Song spends an ample amount of time with Rikidozan's glory in and out of the ring, but what's most notable about this film lies in the way it revels in the man's pain and misery. Roughly two-thirds of its two hour-plus running time is devoted to Rikidozan being tormented by bullies, by adversaries, by himself. You might think that would make for a monumentally glum movie, but it's actually somewhat cathartic - and Sol Kyung-Gu has the acting chops to pull it off beautifully. 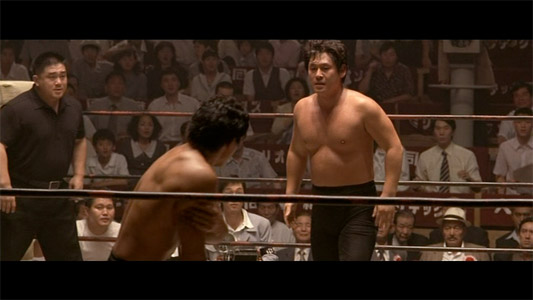 Pathfinder Home Entertainment's DVD of Rikidozan: A Hero Extraordinaire showcases the film in a clean, smooth anamorphic widescreen transfer. The letterboxed 2.35:1 image looks great, with a warm 35mm print that is on par with your average big-budgeted Asian productions (minus the kung fu).

A 46-minute Making-Of Featurette consists of straightforward behind-the-scenes footage with no interviews and scant narration (which is unsubtitled). Perhaps the most valuable extra is the three minutes of Historical Footage with video clips and photos of the real Rikidozan in action. A Teaser Trailer and Theatrical Trailer round out the extras. The DVD also contains trailers for other Pathfinder Pictures releases, such as I'm a Cyborg, But That's OK.

Rikidozan: A Hero Extraordinaire serves as an intriguing and polished look at a sports figure that this reviewer previously knew nothing of. Sol Kyung-Gu's committed performance in the title role makes this film something memorable. Highly Recommended. 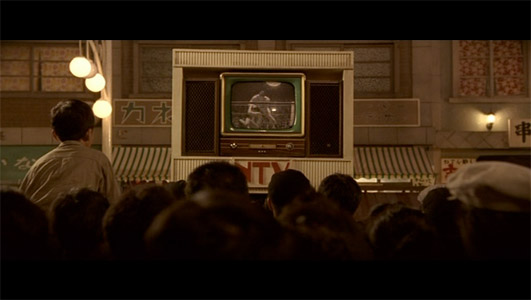