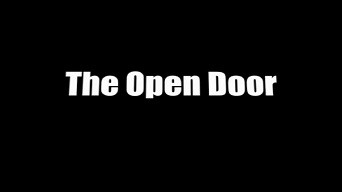 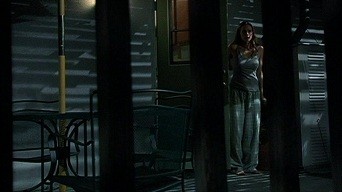 When DVD Talk sent me Phase 4 Film's latest low budget horror DVD release, The Open Door, to review, I anticipated, based upon it description, another clever supernatural twist on the teen slasher formula along the lines of Forget Me Not released by the distributor earlier this year. It did seem a little odd that this film, apparently made in 2008 here in the United States, was only now - at the end of 2011 - getting a US home video release. But, eh, such things can happen.

The Open Door does involve a clever plot device from writer and director Doc Duhame. In it, a pirate radio station broadcasts out of a van every 29 days during the full moon (using station 99.9, ahem, on the FM dial). Two mysterious voices seem to run the show: a spooky male who sounds like he should be hosting The Twilight Zone and a new age female identifying herself as The Oracle. Together, they accept calls to an obligatory movie-universe 555 phone number and promise their callers that their wishes will come true. The movie's opening scrawl establishes that a rash of localized murders and suicides occur on these nights of the full moon when the station is operating. So yes, if 99.9 isn't enough of a numeric clue (one of the last shots of the movie explains how the number is significant for the dense minds out there), demonic things happen when hapless souls encounter this broadcast on their radio dial.

The concept certainly could work for a teen horror film, but unlike Forget Me Not, The Open Door basically bungles the idea in its execution. Three key things frustrated me about this movie, keeping it from realizing the concept's full potential. 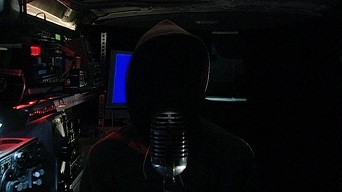 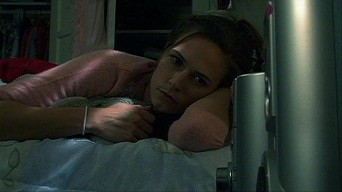 One of the key problems is that the teen cast of characters is stock to the extreme. The Final Girl, Angelica, played by Catherine George, is fine enough; however, Angelica's role in the movie, disappointingly, ends up being more Pandora than Laurie Strode, as she's the dummy who calls The Oracle in the first place. Perhaps the phrase "first place" is misleading, though, since it's not until midway through the movie that the plot device is actually acted upon.

A good chunk of the film is devoted to setting up the eventual cannon fodder. Angelica is surrounded by a group of moronic teen stereotypes doing stereotypically moronic - and uninteresting in a dramatic sense - sorts of things. Yep, we get dumb and over-aggressive football player bullies. We get catty and backstabbing cheerleading girls. We get obligatory large parties with alcohol and loud music and not a single parent anywhere to be found. And that's half the film right there. Yawn.

All that stuff is par for the course, true, for this genre. However, the acting is, at times, shrill and over-the-top, which doesn't help matters. This is no more in evidence than in an unintentionally humorous scene where Angelica's parents confront her about her disrespectful behavior, a scene that challenges daytime soap operas in its believability and histrionics.

In addition, the self-professed horror hounds out there may be disappointed by The Open Door's misleading UNRATED scrawl prominent on the DVD's cover art. Yes, the movie is not rated - though the content here doesn't really rise much above PG-13 quick-cut effects and content. The second half does have a few effective jump scares, but little else that gets the heart pumping.

So, all in all, The Open Door is not as engaging as the clever concept suggests. I'll go with a Rent It recommendation, but only for the horror fans out there. 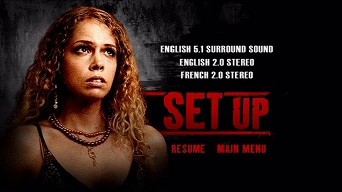 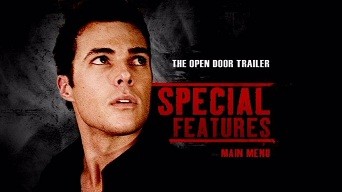 Phase 4 films gives The Open Door an anamorphic widescreen presentation with a 1.78:1 aspect ratio. I didn't have any major issues with the video quality, although it hardly seemed exemplary with colors appearing slightly muted.

Three audio tracks are available on this disc: English 5.1 Surround Sound, English 2.0 Stereo, and French 2.0 Stereo. The 5.1 track is the default - and it was serviceable enough with dialogue always clear. To be honest, the 2.0 English track may have been fairly redundant, as the 5.1 track was hardly dynamic in approach. No subtitle options are available.

Trailers for Kill Katie Malone, Absentia, Forget Me Not, Terror Trap, and Lucky precede the main menu. A Special Features submenu only provides access to a trailer for The Open Door itself.

Doc Duhame's The Open Door offers a clever supernatural premise for a teen horror film; however, its execution in terms of character, acting, and pacing leave a lot to be desired. This gets a Rent It recommendation only for the horror fans out there.