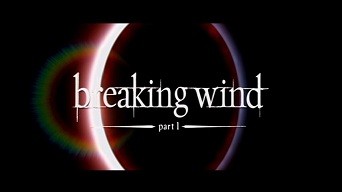 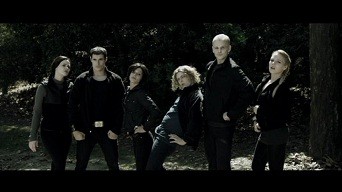 Film history wouldn't be complete without its share of classic spoofs, and genre fare has provided the inspiration for many funny parodies over the decades. The Universal monster movies, for instance, have been sent up by the likes of Abbott and Costello and Mel Brooks. Speaking of Brooks, perhaps the king of all parodies was the humorist's take on Star Wars back in the 1980s: Spaceballs. Films like these are successful, in part, because they show nostalgia for and an appreciation of their celluloid source material.

This is what a lot of lesser parodies lose track of. Mimicry alone may be diverting in a fleeting way, but it doesn't warrant a lot of attention or replay. That's what's so curious about the crop of so-called spoofs on Stephenie Meyer's ultra-lucrative vampire / werewolf romance saga Twilight, the book-to-movie phenomenon of the last five years. Like Star Trek, Twilight is a franchise both adored by its fans and vilified by its detractors. It would seem to be perfect fodder for a humorist to come along and poke fun at its Harlequin paperback excesses, fun that could be enjoyed by lovers and haters of the series alike. Several filmmakers have attempted it; indeed, Jason Friedberg and Aaron Seltzer even got their Twilight spoof Vampires Suck released nationally in theaters. (You can review Kurt Dahlke's take on that flick here - fair warning, it ain't pretty.) To this date, no one seems to have gotten it right. 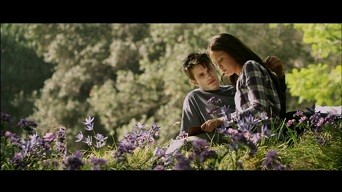 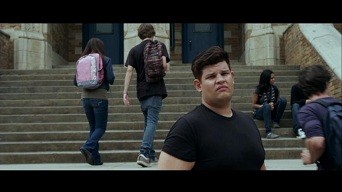 This all leads to Breaking Wind, a painfully unfunny addition to the Twilight parody club that runs a too-long 82 minutes (in a very literal sense - writer / director Craig Moss pads the runtime at the end with footage of Twilight fans and outtakes from the film's production). Moss, unlike Friedberg and Seltzer, dumps the viewer in the middle of the action. Brooding teen Bella (Heather Ann Davis) is threatened by Victoria - and it's up to her vampire boyfriend Edward (Eric Callero) and werewolf friend Jacob (Frank Pacheco) to cater her protection. Many successful parodies can stand alone as independent films, providing the context necessary for viewers unfamiliar with its source to understand what's going on. Not this film. If you haven't seen or read the entire Twilight series, you'll be hopelessly lost in Breaking Wind.

If that was the only problem with Breaking Wind, it could be forgiven. However, true to its title, the spoof relies heavily . . . and I do mean heavily . . . on body humor for its kicks. I've seen plenty juvenile comedies in my time, but I'm hard pressed to think of another movie that focuses upon farts and craps to such a ludicrous extent for laughs. Over and over and over again, Moss's screenplay turns to, well, breaking wind for its attempt at injecting comedy into Meyer's story. Outside of the pun on the Twilight installment titled Breaking Dawn, I fail to see the connection. And, frankly, seeing the great character actor Danny Trejo reduced to pooping in his pants for a cameo appearance in this dreck is just sad. Sad.

A handful of chuckles are to be had here: an out-of-nowhere dis of actor Brendan Fraser, a nice little bit about those online word capture identification systems used to prove the user is human, etc. However, these few moments are buried in nonsensical scenes like one where four of Johnny Depp's most famous characters appear in a forest or another that riffs on Paranormal Activity because . . . I guess Moss decided he needed to widen his satirical reach? Much of the humor is tacky and forced - and strangely creepy in its shallow perversity.

Ultimately, I'm not much into bashing movies - even ones like Breaking Wind that deserve it. All in all, it's not funny for 80 of its 82 minutes. Let's just go with a "skip it" and move on with our lives. 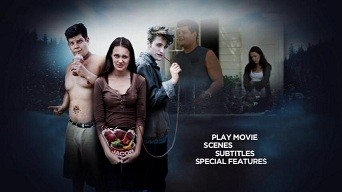 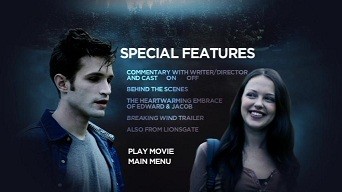 Lionsgate provides Breaking Wind an anamorphic widescreen presentation with a 2.35:1 aspect ratio. The movie looks fairly professional: colors are strong and details are sharp. What more could you ask from a standard DVD?

The lone audio track is an English language Dolby Digital 5.1 affair that doesn't noticeably rise much above a stereo sound, not that it really matters for a production like this. Optional subtitles are available in English and Spanish.

Trailers for Disaster Movie, Scary Movie 3, National Lampoon's Van Wilder as well as an ad for epix precede the main menu. An additional trailer for Breaking Wind itself is available in a Special Features sub-menu.

More significant extras include a Behind the Scenes featurette (in a 4x3 aspect ratio) that runs a lengthy 20 minutes and a couple outtakes of a key gag in the movie titled The Heartwarming Embrace of Edward & Jacob (1:57). Still, the most notable extra is a feature-length commentary track with writer / director Craig Moss and castmembers. A random sampling suggests it is lively and informative - with a lot of laughter. I guess it's good to know that someone enjoyed watching this.

One would think that the Twilight series provides enough fodder for a half-dozen clever spoofs - and yet no one has gotten it right yet. Breaking Wind is the latest example of a dud - an unfunny send-up of the franchise that relies far too much on bodily functions instead of wit for its humor. Just skip it.