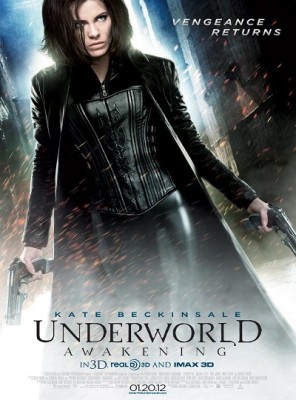 Underworld: Awakening is not as "awakened" as its screenwriters, directors (amazingly... that is plural), and producers want you to believe it is. Or did the filmmakers call it that to try and remind fans that each film has become progressively worse than the last one? The fourth film in the increasingly brain-dead action-horror hybrid series is not only the worst entry to date but it's an unbelievably bad movie with nearly every element of potential being left undeveloped, under thought, and undercooked. This isn't only a bad sequel. It's such a bad film that it might make one wonder why the series ever turned into a franchise in the first place. Keep in mind; this opinion is from someone who considers the director's cut of the first film in the Underworld series an under-appreciated achievement in action cinema with stellar style, solid acting, and fascinating storytelling. The Underworld film series has fallen so far, it's quite the disappointment to behold the latest and worst to date. I say "worst to date" because after the massive box-office gross this film received following its opening weekend there's little chance of the studio not wanting to go back to the drawing board for another (lackluster, more zombie-than-vampire) entry. It's that bad of a film.

Yes... I repeat: Underworld: Awakening is that bad.

This time around, Selene (Kate Beckinsale) is back to her role of wearing leather outfits while she is also running around with machine guns and attacking Lycans (basically, werewolves) while fighting the good fight for her vampire mates. Sadly, this character has become a faint echo since the first film. Beckinsale is an excellent actress but with each progressive Underworld entry the role she performs is less dynamic and more typical. While I wouldn't argue with anyone that there is someone else who could portray the lead character (only the charismatic and intense Beckinsale can), there is no doubt that she isn't being given the kind of material that she deserves to be working with. Her talents far outperform the vehicle that is this continually depressing saga of ridiculous vampire flicks. 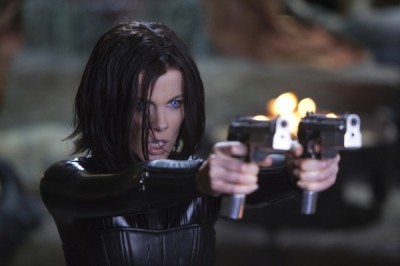 Selene wakes up in a laboratory and immediately begins to kick some ass. She was apparently asleep for tons of years (exactly how many years, I either missed or didn't pick up on with how over-the-top things become quickly). She finds out that the human race discovered the vampires and lycans and decided to run all sorts of experiments on the species while simultaneously trying to wipe out both species. This is something that makes Selene upset, and she enacts some quick revenge against all the human beings around her. As the story progresses (wait... there's actually a story?!) the plot, um, thickens... and she discovers that the vampires must continue to wage war against the lycans... because, um, actually I'm not so sure what was going on at that point... A lot of the plot elements were quite incomprehensible.

To make a long story short: The film focuses on the vampires fighting the lycans once more. Oh, and it turns out Selene had a daughter she didn't know about! I'm assuming it was with that Scott Speedman character? The character he portrayed, Michael Corvin, shows up in one scene in a cryogenic tube and Selene shoots some bullets at it and supposedly saves him but we don't see anything happen. I guess it was so that the producers could throw enough money Speedman's way to get him back for another of these Underworld movies should this one make enough at the box-office.  Um... okay. Does any of this sound good?

Since when did vampire stories become dull? As I left the showing, I wondered why the film transformed into a zombie series. Vampires are always articulate and interesting, but here they seem to have entered a trance of the "undead" that shows little of why people have found the mythological stories fascinating. The storytelling seems to be on auto-pilot now. 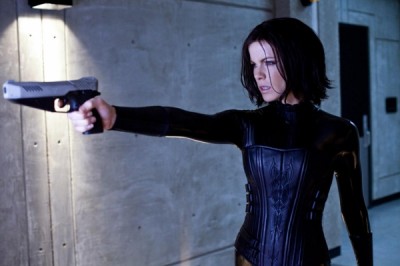 It's sorta sad to even try and muster enthusiasm for writing such a negative review. I didn't want to peg this movie as some kind of massive disappointment but that's exactly what it is. I suppose people in the right frame of expectation (after seeing the disappointing sequel and prequel) wouldn't have gone in to the movie theater to see the new Underworld movie with any hopes for great things. But the first film was so unbelievably good for a genre film and it rightfully earned a strong following. Yet things have led towards worse and even worse efforts. The scriptwriting is absolutely abysmal, the acting is downright awful (except from Beckinsale), the direction seems completely unfocused, and the special effects are getting worse with each effort. Add in an extra layer of gruesomeness (this film is grosser than prior entries) and it pretty much seals the deal. Underworld: Awakening is one of the first big studio films released in 2012 and it is already an easy contender for worst of the year. You're better off going with a rental or purchase of the first and best film in the series.

Note on the 3D Presentation:

The 3D effects for the film are surprisingly lackluster.  This would rank amongst the least satisfactory 3D theatrical viewings I have experienced. The extra dimension doesn't make the movie more enveloping, and the gimmick effects hardly seem effective either  -- add to that the dark, gloomy cinematography and the film becomes even more difficult to experience. On the bright side: who wants to see the gore and ridiculous effects leap out at you in 3D perfection anyway? It was a bad idea from the start! 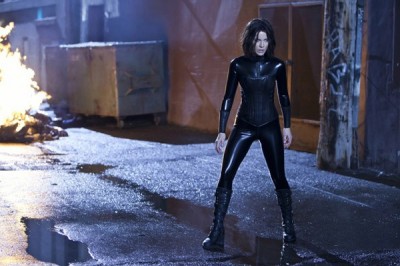 Sadly, Selene is not back for the best film in the franchise's history.