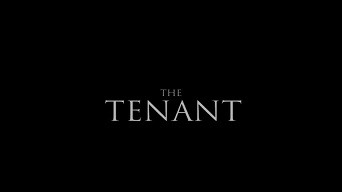 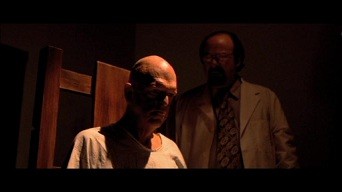 Not to be confused with the Roman Polanski film of the same title, The Tenant is a low budget horror film from a couple years back that has now been released on DVD by Indican Pictures. Ric La Monte, the writer and director of The Tenant, has squeezed together two different though linked stories here. The first is an old-styled Tales from the Crypt-ish shock story while the second is a borderline slasher film. Both are set largely at the gothic-looking Edgewood Asylum with 28 years separating the two narratives. The former tale is more successful than the latter - though the movie as a whole doesn't end up amounting to much. Aside from fans of old school midnight movie programming, most moviegoers would do well to seek shelter elsewhere. Scroll down a bit further if you're curious as to why. 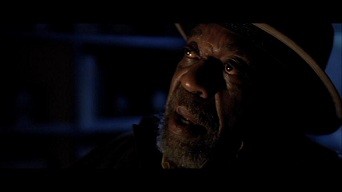 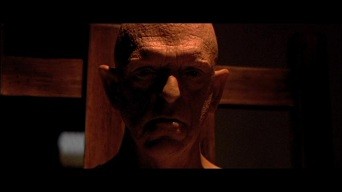 The Tenant clearly shows its low budget roots throughout, however its opening demonstrates promise that never really materializes. After an establishing scene of two teens getting killed by . . . something . . . at the present-day Edgewood Asylum, La Monte's screenplay warps the viewer 28 years into the past for a 40-minute flashback tale that features a lot of old clichés one might expect from an EC comic book or a Poverty Row B feature. Populating this story are a mad scientist, a scheming nurse, dark shadows, thunder, lightning, and a number of off-key supporting characters, both in and out of the asylum. La Monte does a nice job of setting up mood in these early scenes - and the blue noir-ish lighting compliments a surprisingly fine turn by veteran character actor Bill Cobbs in what amounts to an extended cameo as a deliveryman with a grisly cargo.

While the rest of the cast doesn't really impress, it didn't seem to matter. This early tale of a doctor obsessively turning to genetic engineering despite his pregnant wife's insistence that he focus on her needs and the running of their asylum certainly doesn't attempt realism - and its over-the-top acting complimented the comic book story of a spurned nurse who contaminates and profoundly mutates one of the doctor's unborn twins during an exam. In addition to Cobbs, Michael Berryman (from Wes Craven's original The Hills Have Eyes) turns in a solid cameo as one of the asylum inmates - and it felt like this part of The Tenant, with a little reimagining, could have been a semi-successful short film or an entry in some sort of anthology series like Tales from the Darkside.

Unfortunately, another 50 minutes is tagged onto this story. Flash-forwarding back to the present, Edgewood Asylum appears to be abandoned. On a dark and stormy night (again), a small group of deaf children and four of their counselors are driving in a van when one of its tires blow. With no cell phone service available (of course), the group unwisely decide to take shelter in the asylum. For reasons that only bad horror movie logic can concoct, they decide to spend the night inside, even though the place is clearly unsanitary and dangerous. What follows, despite some considerable violence, is a routine, even boring, runaround as the kids and counselors are offed one-by-one by the now-grown 28-year-old monstrosity from the previous story. This half of the movie is one of those films where characters split up in twos or walk around alone constantly with little rhyme or reason down darkened corridors holding, literally, candles to illuminate the movie. I was also a bit disappointed that more wasn't done with the deaf students - this seemed like an unusual premise with some promise. The kids are not really developed as characters, however, and their primary purpose seems to be to serve as helpless cannon fodder.

The Tenant goes for some last minute "surprise" twists at the end, though these are obvious, that try to help unite the storylines further. All in all, The Tenant doesn't really work as a whole, despite its somewhat promising start. Still, the horror hounds out there are thrown a few halfway decent gore effects to sink their teeth into (though a few others are fake-looking). And I can never fault a horror movie that incorporates Beethoven's Midnight Sonata into its soundtrack - one of the best mood pieces in classical music. Rent it, if you're curious. 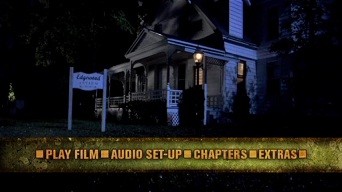 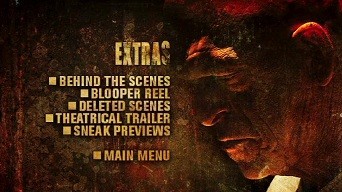 Indican Pictures gives The Tenant an anamorphic widescreen presentation that I suspect reflects the aspect ratio of its theatrical exhibition. The image is fine enough - with strong colors, especially in the first half of the film.

Two audio options are present: Dolby Digital 2.0 Stereo and Dolby Digital 5.1 Surround. The Stereo track appears to be the default and the one I listened to. I can't say that I was impressed by it - dialogue, at times, was not well-represented while the film's score tended to overwhelm. No subtitle options are available.

Indican Pictures at least provides their release of The Tenant with extras, unusual for a low budget film of this kind. Behind the Scenes (13:31) has writer and director Ric La Monte enthusiastically discussing the making of the film, with additional comments from others involved with the production. A Blooper Reel (4:19) and three Deleted Scenes are also available.

Additionally, trailers for Bonnie & Clyde Vs. Dracula and Death of the Virgin precede the main menu. A Sneak Previews sub-menu offers access to these trailers as well as previews for Dark Metropolis, Bat $#*! Crazy, and Rosencrantz & Guildenstern Are Undead. A trailer for The Tenant itself is also made available.

Ric La Monte's The Tenant has early good moments in its first half with a couple fine cameos from veteran actors Michael Berryman and Bill Cobbs. However, a second half run-around in a dark asylum fails to impress. This gets a rental recommendation only for the die-hard horror hounds out there.