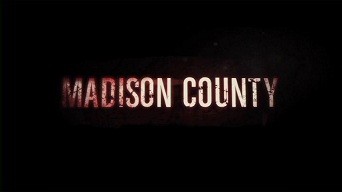 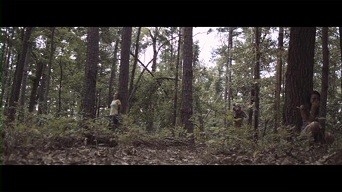 Image Entertainment's cover slip for their recently released DVD of Madison County is a great example of ludicrous home video art - replete with two garish "poster" images of the film's pig-masked and axe-wielding killer and the lame yet chuckle-worthy tagline "Kiss your axe goodbye" in blood red type. The package is reminiscent of grindhouse and drive-in promotional material of yesteryear. And like the great majority of those films, Madison County does not quite successfully deliver the brutal exploitation that its advertising promises. Though, considering the Internet Movie Database reports its budget to be a mere $70,000, the movie certainly transcends its funded scope.

Some thoughts about this flick's strengths and weaknesses follow the break, but first, I'll make the promise that I won't cheekily joke about Clint Eastwood, Meryl Streep, bridges, or your mother's favorite movies. 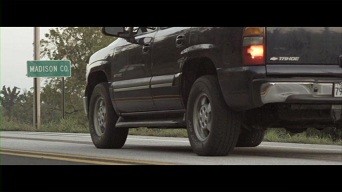 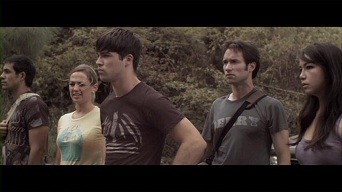 Madison County is clearly derivational low-budget pulp filmmaking. It lives and breathes the slasher film clichés so lovingly riffed upon in Drew Goddard and Joss Whedon's recent The Cabin in the Woods. Here, a quintet of college students who aren't quite as archetypal as Cabin's quintet treks out to the titular county, ostensibly because two of them are working on a thesis about a legendary serial killer. Madison County is home to a reclusive author on the subject whom the thesis's principal author wishes to interview. But, being young and virile, they invite their girlfriends / love interests along to transform the scholarly journey into a fun camping trip. One of the young ladies has a comically overprotective brother who moodily tags along. And so, these five fish out of water venture to the backwoods county, sparsely populated with the rural "hick" stereotypes so prevalent in films like Wrong Turn and its ilk.

To be honest, the set-up is so familiar that writer and director Eric England unwisely drags out the college students' trip through the first lifeless half of the movie. The 20-ish clique rather boringly discuss their relationships, discover the creepy county denizens, and trespass their way through the reclusive author's property for a drawn-out 40-odd minutes. They also irritatingly do the same stupid things young protagonists often do in these movies, like talk about how and why they'll split up before splitting up. Somewhat thankfully, though, England's script at least doesn't jimmy in some sort of lame explanation for why these students can't use their cell phones. They just don't have any; that may be odd, but in Madison County's fictional universe, that's the way things work.

In any case, once the lumbering hog-masked killer, fittingly christened Damien, shows up and starts plowing through the cannon fodder characters, Madison County hits its stride. Despite the prurient "unrated" scrawled beneath the film's title on the DVD's cover, the movie isn't quite as bloody as horror hounds might expect - though it does have its moments that might be queasy for non-fans unfamiliar with the genre. England favors some fairly tense cat and mouse scenes over visceral gore, which he succeeds at more often than he fails. My one main complaint is that he reverts to that nauseating handheld herky-jerky trick so many contemporary filmmakers feel the need to utilize during tense action scenes. That nonsense doesn't usually create the cinema verite feel that's intended - and it certainly doesn't here. However, the acting compensates, with the two female leads, Natalie Scheetz and Joanna Sotomura, surprisingly convincing in their terror during their plight in the remote backwoods.

So, Madison County is one of those tales of two halves. The first half is a routine and boring set-up, while the second half is a routine, yes, but still fairly effective slasher film runaround. Not all questions are answered at the end - and perhaps more could have been done with the county residents' apparent complicity with Damien's murder spree. Though, I suppose that can be explored in a sequel, should one ever arise. I would say it's worth renting for the horror crowd, but I'll notch that recommendation up a level because of the DVD's extras (more on this below). 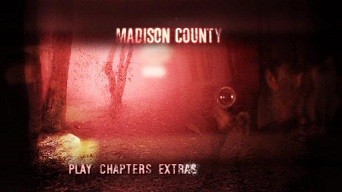 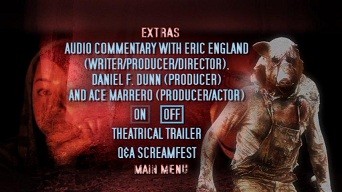 The lone audio track is an English language Dolby Digital 5.1 Surround affair. The mix itself is pleasingly dynamic enough. It's a little surprising, though, to see no other options available, not even subtitles.

Trailers precede the main menu for Don't Let Him In, Rabies, Beneath the Darkness, and Little Deaths. A trailer for Madison County itself may be found in an Extras submenu.

Madison County's lean 82-minute runtime can be evenly divisible into two halves: a boring first half with a routine look at the movie's killer's eventual cannon fodder and a tense second half as said cannon fodder tries to escape the killer's onslaught. This low budget film sticks to grindhouse slasher conventions and plays them with a straight face - yet it's well-made enough to seem like it had a much bigger budget. Given that Image Entertainment actually provided a couple significant extras, Madison County gets a passing recommendation for horror film fans.