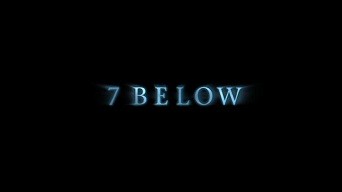 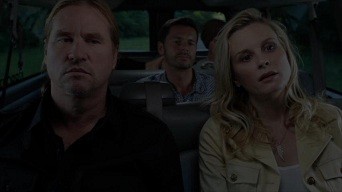 Look, I wasn't expecting much from 7 Below going in. I've watched plenty of direct-to-video horror over my years - and reviewed quite a few titles in the genre here at DVD Talk and elsewhere. One pops the disc into the player, and if the movie makes sense or does anything remotely interesting or unique, then it gets chalked up as a win. Simple. 7 Below even had a few things in its favor, most notably a cast headlined by Ving Rhames and Val Kilmer with veteran character actor Luke Goss in tow. As a supernatural thriller, the film surely had to be watchable at least, no?

Frankly, no. 7 Below surprises in its almost complete lack of energy and suspense. It's been a while since I've been this bored by a horror flick. Somewhere in this cinematic affair is the ghost of a good idea, but Kevin Carraway's production fumbles from start to finish without catching it. 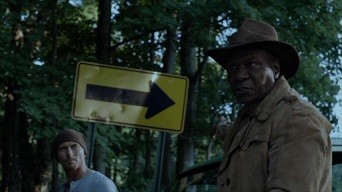 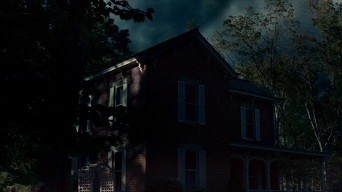 7 Below opens with a prologue set a century in the past - in a house that seems much more contemporary. The man of the house is brazenly (and rather stupidly) making Shakespeare's proverbial beast with the two backs with his mistress while his wife, two daughters, one son, and an aunt all "rest" within earshot in other rooms. The wife finally interrupts her husband, sending the mistress fleeing - and then proceeds to check up on her daughters in another room. Meanwhile, the young son picks up a kitchen knife and starts slaughtering the household. Confused? Yeah, the prologue doesn't make a lot of sense.

At precisely the 7 minute mark, the title 7 Below appears on the screen. The OCD in me refuses to believe that might be coincidence. Once the obligatory opening credits sequence is finished, we're introduced to our main characters in the present day as they travel down a deserted country road in a large van that the DVD cover art's blurb suggests is a tour bus. Okay. Bill McCormick (Kilmer) and his wife sit close to the driver - they're having a hard time with their marriage. Isaac (Goss) and his brother are in the back with a doctor. The topic of their discussion so blatantly signposts what's going on that it pretty much spoils any suspense the film's "mystery" might generate. In any case, before any of the tourists can say "creepy ghost girl on the side of the road," the van veers off the road and slams into a tree, killing the driver.

As the survivors gather their wits, creepy Jack (Rhames) drives up in his pickup offering sanctuary at his place, as a storm of the century is brewing. So, the intrepid tourists - remember, these are intelligent adults - leave the dead driver and hop into Jack's truck. Lo and behold, Jack's house is the same house from the film's prologue that didn't make sense.

From there, it only goes downhill. The characters see the ghosts of the inhabitants of the house from a century before while one by one they get bumped off. None of the characters do much that's intelligent in the situation. The acting is fairly atrocious, which one wouldn't expect given the pedigree of the cast. I mean, seriously, a major storm is brewing outside and people are dying, yet the protagonists spend their time listlessly lying about this creepy old house as if they had drunk a bottle of Nyquil, chatting about their marital status. The identity of the killer is obvious from the get-go. Meanwhile, Ving Rhames's character is almost but never quite comical in its inane development. Maybe if the script and direction took a more humorous route, this production would have worked, but the cast and crew treat the goings-on with somber seriousness. During the last half hour, the few surviving characters do get caught up in an atmospheric fog outside - but even this successful element is wasted as they make idiotic decisions about splitting up and finding help.

As I suggested at the start of this review, I enjoy low budget horror, despite its typical shortcomings, and I'm often forgiving to a fault as long as each individual entry offers something entertaining. Having said that, I hated 7 Below in a way that I haven't hated a movie in a long time. The pairing of Ving Rhames and Val Kilmer should not have produced something this insipid and boring. Just skip it. 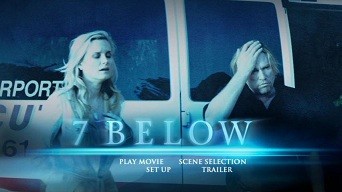 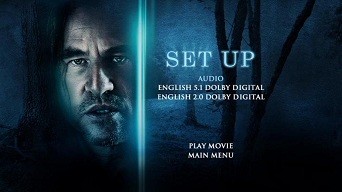 Arc Entertainment gives 7 Below an anamorphic widescreen presentation with a 1.78:1 aspect ratio that the company claims "preserve[s] the aspect ratio of its original exhibition." Details look fairly sharp, but the film itself is often shrouded in half-light to reflect the dark storm outside.

The DVD cover art, rather strangely, suggests that only one audio track is available on this disc when in fact there are two: 5.1 Dolby Digital and 2.0 Dolby Digital. Both are English language. The 5.1 track is the default and the one I listened to. The rumbling of the storm is well-presented here, but otherwise, the mix is center-heavy. Dialogue is clear throughout. No optional subtitles are made available.

Trailers for Creature and 96 Minutes precede the main menu; in addition, a trailer for 7 Below itself is available via the menu system. And that is it for extras.

7 Below fails to deliver any of the promise a low budget supernatural chiller pairing Ving Rhames and Val Kilmer might suggest. This is one bad movie. Just skip it.