Somehow harem anime series never get old for me. As long as these shows stay light and stray from unnecessarily complicating the story, these shows are usually time well spent. For those who don't know, harem anime series feature a swarm of hot girls with crazy hair that inexplicably battle for the affection of a dorky lead character. It's an anime hallmark; many view this subgenre as oversaturated with titles such as Tenchi, El Hazard, Love Hina, and their countless imitators. Infinite Stratos does not bring anything innovative to anime. However, it mixes portions of harem and sports anime in with bits of Hetalia, Evangelion, Vandread to concoct a highly entertaining brew.

Infinite Stratos (IS) are female-operated exoskeletons that exist in limited quantities throughout the world. IS units are not allowed in military combat. Instead, students use IS units in a UFC-like combat sport where the winner takes down her opponent's shields. In theory, nobody gets seriously hurt in these battles. Ichika, a 15-year-old boy, discovers that he is the only male in the world who can pilot IS units. He enrolls in the all-female Infinite Stratos Academy to learn how to control an IS. Being the only guy attending a teenage academy has its benefits: every girl in the academy wants poor Ichika. Badly. 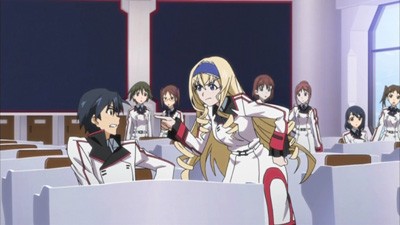 Infinite Stratos episodes are largely self-contained and formulaic. In a typical episode, the ladies fawn over Ichika. A new student challenges him to a battle, Ichika stumbles into an unlikely victory, and his former opponent falls madly in love with him. By then end of the series, Ichika has an absurdly massive throng of girls chasing after him. No grand storyline exists through most of the series. The episodes encompass a typical day in the life of a teenage boy who is surrounded by over-hormonal, hyperactive girls with jiggly parts. And when Infinite Stratos sticks to this simple formula, it excels. 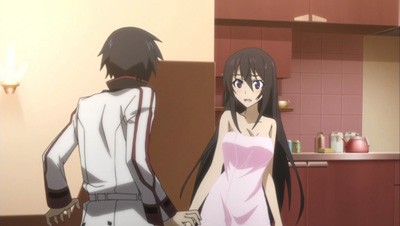 While Infinite Stratos tends to be formulaic and predictable, that doesn't detract from its entertainment value. This show is simply fun to watch. The episodes move along at a quick pace. I was often surprised when the credits rolled and eagerly skipped to the next episode. The only moments where Infinite Stratos slipped were when it took itself too seriously. Some eyeroll inducing Evangelion-like, introspective scenes sneak into later episodes. These scenes feel tacked on and try to introduce unnecessary and misplaced complexity into a storyline that didn't require it. Thankfully, these moments are short-lived and Infinite Stratos quickly regains its form. 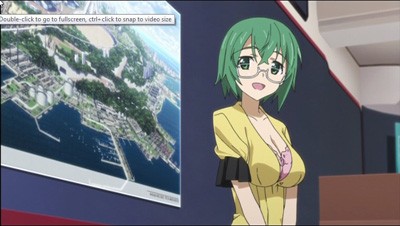 This series shines when it focuses on its large cast of females one-upping each other for Ichika's attention. Early on, Ichika rooms with his childhood friend and kendo champion, Houki. This creates hilarious rage-fits among the other girls. These spats typically end with Ichika caught in the middle and Houki bashing him in the snot-locker with a kendo stick.

Later, Ichika rooms with another supposedly male character. It's not a spoiler that "Charles", a French transfer student, is actually a girl. In fact, it's blatantly obvious. I was disappointed that the producers did not stretch out Charles' ruse for a few more episodes--she makes her big reveal in the next episode. It felt like a treasure chest of good gags and subplots were left on the table with this angle. But Charles turns out to be perhaps the most likeable female in the cast, so all is forgiven. 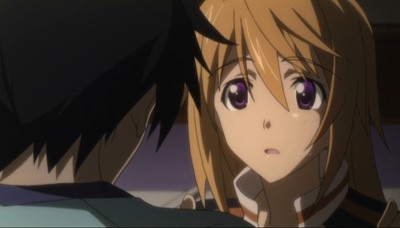 The cast includes a French, German, English, and Chinese students. Similar to Hetalia, each of these characters are highly stereotyped caricatures of their nationalities. The stereotypes are good natured and harmless. While Hetalia obviously influenced these characterizations, it's not nearly as overt. Cecilia is a snobby British girl, who cooks bland food. Charles, or Charlotte, is a fun French student, who has no qualms with nudity. Laura is serious and militant--essentially a female version of Germany's portrayal in Hetalia. Unfortunately, this series leaves Americans and Russians out of the fun. 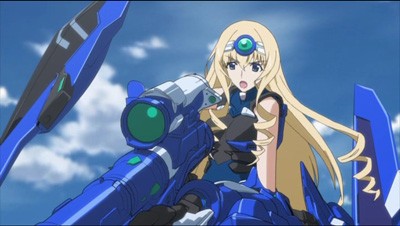 The fighting scenes in Infinite Stratos are outstanding. As is characteristic of this series, these scenes are not innovative, but they expertly recreate successful techniques of earlier series. The action sequences play like a mix between a big robot battle and a boxing match from Fighting Spirit . Ichika is more powerful than he can possibly fathom; his enormous potential is hindered only by his rookie idiocy. With each battle, Ichika acquires new techniques and grows stronger as an IS jock. He has to learn how to exploit his opponents' weaknesses while mitigating their strengths. The action scenes are exciting and add some surprisingly interesting strategy and depth to the battles.

Infinite Stratos, when it's focused on its cast's gigantic lust triangle (hexagon, rather) and combat scenes, is one of the most watchable anime series that I have seen in the past year. For the most part, it doesn't muck around and attempt to slather on layers of unneeded complexity. Its goal is to provide simple entertainment to those of us who sometimes just want to chill on the couch after a hard day's work, turn off our brains, and enjoy some silly fun with a likeable cast.

Sound: Audio is the one area where Infinite Stratos fails. It's not bad quality, but in a modern series that relies heavily on big robot brawling goodness, it is feasible to expect a full 5.1 cacophony of robotic death and destruction. Nope, this Infinite Stratos DVD set has a barebones 2.0 stereo mix.

Video: The video is presented in 16:9 anamorphic widescreen. The video is average quality. Some instances of compression artifacts exist, but rarely detract from the overall look of the series. The colors are bright, clear and vivid as can be expected from this style of show.

Extras: ZOMG! Now this is what I'm talking about! Infinite Stratos treats its fans to a king's ransom of extras with this release. Included are multiple voice actress commentaries, a full extras disc, and a soundtrack CD. Bravo, Sentai Filmworks. Bravo.

Of all the features, I enjoyed the 41-minute Radio IS episode the best. This feature goes into the studios of a podcast hosted by Yoko Hikasa (Houki's voice actress) and Asami Shimoda (Lingyin's voice actress). In this episode they bring in Yukana, the voice actress for Cecilia Alcott--the uppity British student. She seems slightly uncomfortable through most of the episode while facing Yoko and Asami's hyperactive, giggly questions and games. It's a little bizarre and awkward at times, but a lot of fun to watch.

The commentaries with the Japanese voice actresses are as goofy as the IS Radio podcast. Each one features the actresses giggling through futile attempts to be serious talk about the plot of the episode or characters.

In the 10-minute behind the scenes feature Kana Hanazawa, the voice actress for Charles Dunois, interviews Director Yasuhito Kikuchi. They discuss the art, setting and plot and show artists producing animation frames.

The bonus soundtrack is a full CD that includes an insert with both Japanese and English lyrics. While, Infinite Stratos' theme music isn't among my favorites, the inclusion of this CD is pure awesomeness.

Bottom Line: Look, Infinite Stratos is not a high-brow, multilayered story. When it dips its foot in those waters, it feels out of place and the scenes falls flat. At its core this series is pure, simple fun. Its humor is similar in spirit to other popular harem series. If you can imagine an amalgamation of Tenchi, Hetalia, Fighting Spirit, Evangelion, and Vandread then you might conjur something close to this series. It takes successful elements of many popular shows and mashes them into a highly watchable series. The extra OVA episode is not enough. I demand more Infinite Stratos! Highly Recommended.