Time Team is an educational British television series that has aired since 1994. The show sends a team of researchers to a suspected archaeological site with just three days to uncover evidence and solve an archaeological mystery. It's kind of an archaeology game show with professional pride as the grand prize. This set collects twelve episodes that focus on the Roman occupation of Great Britain from the 1st century A.D. through the 4th century A.D. 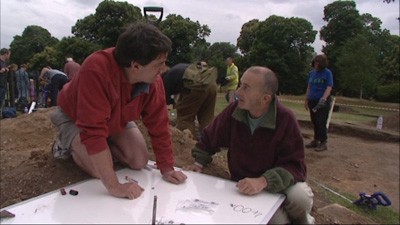 The team, led by host Tony Robinson, includes numerous archaeologists, diggers, artists, and experts of the Roman age. The meat of the show is the dig itself. Mike Aston does a remarkable job of not only explaining what each researcher is doing, making it entertaining. There's a reason that museums and documentaries mainly focus on the results of digs and not the dig itself: it's boring. Archaeology is a tedious process of gently digging, sifting, and washing shards of delicate evidence. Time Team takes this process and breathes unexpected life into it. The show groups together interesting personalities from the field and challenges them by taking the tedium of academic research and making it a game. Viewers can expect to come away with a solid, high-level understanding of archaeological digging and observational techniques after just a few episodes.

Time Team episodes begin with the crew arriving at a new site. Typically, the owners of the site have reason to believe that something of historical importance lies on their property. The team researches the claim, performs aerial surveillance, geophysical scans, and historical research. Once they have determined the most promising areas, they outline dig trenches and hit the dirt. In just three days the crew does a phenomenal work at solving age-old historical mysteries or uncovering evidence that challenges traditional beliefs. In the set's second episode, Time Team uncovers evidence that proves a museum's model of a site is completely wrong. What was believed to be a solitary cemetery in a field of nothingness was actually a Roman worker's village. Some of the discoveries made are simply dumb luck. For instance, in one episode a researcher just happens to notice a rare Roman inscription piled in with more common finds.

As an old Anthropology major with a minor in Classics, I was stoked about getting my hands on this set. This is some hardcore archaeology! The sites they visit include Roman temples, villas, cemeteries, and markets. Many of these sites lie mere inches underneath fields that farmers have plowed for generations. It's amazing that Time Team uncovers any archaeological evidence at all considering the circumstances, but their finds are remarkably well preserved. 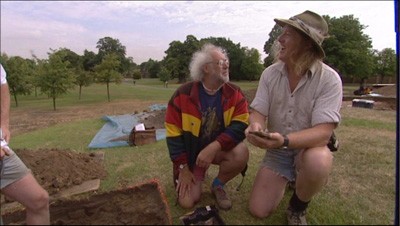 While I enjoyed most of the Time Team personalities, field archaeologist, Phil Harding, is perhaps the most entertaining researcher in the show. Harding has a goofy, every-man aura with his Hagrid-like, West Country accent. But his field instincts are phenomenal and frequently steal the show. In one episode, he insists on continuing to explore a trench while the rest of the team argued to close it and focus on a new trench. Harding's instincts were spot-on. He uncovered an intact coffin that contained a rare, Roman inscription. The man simply lives for this stuff and every scene involving is certain to educate and entertain. 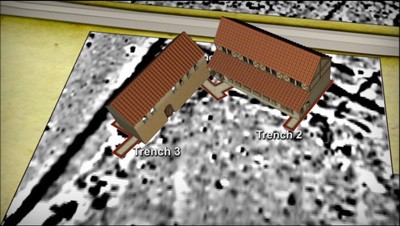 Time Team thoroughly discusses and explains findings to the viewer. Making the process of archaeology accessible to viewers is no easy feat. The show makes brilliant use of overlays and maps to display what the researchers see when they examine a site. Time Team will take an apparently empty field and overlay it with graphics to reveal evidence of Roman temples, villas, and burial sites. It's a great method at showing how a researcher views a site. As the excavation continues, the show puts new discoveries into context through highlighting, map overlays, and artists' renditions. 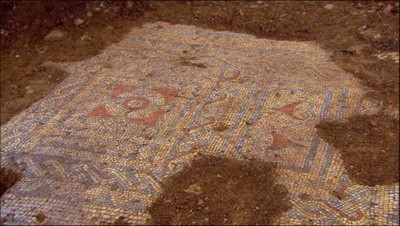 Museums and educational documentaries typically focus on the result of excavations. It's fascinating to watch digs as they occur in an entertaining format. British viewers have been treated to this gem of a show for nearly two decades. I'm shocked that I've never even heard of it until this review.

Video: Most of the set is presented in 16:9 anamorphic widescreen. Not knowing this was a collection, there was a jarring transition between the first and second episode. The first episode, filmed in 1994, is in 4:3 aspect ratio with shoddy video quality. The remainder of the set is widescreen and looks great for a standard definition set.

Sound: The audio is presented in Dolby Digital 2.0 stereo. The sound quality in this set is mostly an afterthought. The series is a heavily dialogue focused educational/reality show.

Extras: The DVD set includes a 16-page viewer's guide that includes a nice map of 1st century Britain along with a brief historical overview of the Roman occupation. Also included are biographies of the Time Team crew.

Bottom Line: Fans of classical era history and archaeology are in for a treat if they have never seen Time Team. A complete buffet of Roman finds are served in this collection that includes temples, villas, mosaics, human remains, coins, and countless shards of pottery. This DVD set not only sheds light on the details of Roman life, but it highlights the job of archaeologists in a fun and accessible presentation. It makes me want to go back to college and get that doctorate's degree in Anthropology. Well, almost--let's not get carried away here. Recommended.