Please Note: The images used here are taken from promotional materials provided by PBS, not the Blu-ray edition under review.

The word "infrastructure" most often hits our ears when tossed off by one politician or another, but to what extent do we grasp what our cities', states', or nation's infrastructure actually is -- what it looks like, how it came to be, how it works, and what part it plays in most details of our daily lives? I personally have long been intrigued by the concept: infrastructure is something omnipresent yet virtually invisible (we rarely have to think about it), and there's something extremely interesting about the origins, whys, and wherefores of the roads, rails, or airways we travel every day; how the vast array of goods available in our affluent nation is made and how it arrives on our market shelves; what generates the juice we need for our ever-expanding arsenal of electronic devices and how it gets to us, etc. The PBS miniseries America Revealed was created to fill us in on that bigger picture and give us a better idea of the ins and outs of all those networks and systems whose existence and smooth operation we usually take for granted, but without which we would be unable to work, play, or live.

Former Survivor champion and all-around paragon of game affability Yul Kwon is our intrepid host for the series' four parts, which cover the history, current condition, and -- most extensively and interestingly -- the day-to-day ebb and flow of the American systems of food production, transportation, energy, and manufacturing. Kwon and documentary crew travel far and wide -- from New York to L.A., from Florida to Alaska -- to explore, show, and tell about every principal category of the American infrastructure. Kwon's investigative travels find him atop the Lake Shasta dam in California, climbing a flight-path beacon in Montana, riding the rails through Chicago's insanely dense transport hub, bicycling through a modernized shipyard too vast to traverse on foot, skateboarding through the Facebook offices, and even participating in La Tomatina, an annual festival in Reno where participants clobber each other with half-spoiled tomatoes. 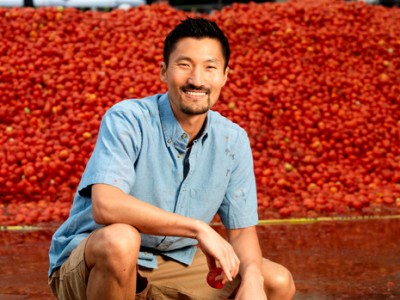 That last may make you wonder, what in the world does watching a former Survivor contestant clamber around in squashed produce as he engages in a mass food fight with a crowd of out-of-control, tomato-splattered people have to do with the U.S. infrastructure? I found these and other of America Revealed's attention-grabbing devices -- Yul skydives! Yul risks his life hovering in a helicopter precariously near potentially deadly power lines! (and that's not even considering David Schweitzer's score, which is like a jungle/rave/techno DJ given free rein to fill every available aural background space) -- off-putting at first, gimmicky and pandering. But it's actually indicative of the series' very astute and effective pedagogical method (this is, after all, PBS -- educational TV). Showing Kwon participating in a big food fight is a moment of pure, mindless "entertainment," but the point is that these tomatoes are surplus from California's Central Valley, an agricultural horn of plenty that grows so much produce (and requires so much water, all of which must be brought in from elsewhere) that some of its leftovers must be used in a crazy annual food fight lest it go to total waste.

That is the path of knowledge followed again and again in America Revealed: hold up the most local, immediate individual experience, then gradually trace it out to the largest perspective and back to its roots, revealing it as an illustration, one example of millions in a systematic, interconnected big picture. When Kwon takes to the streets of New York on a bicycle with a pizza deliverer, it's so that we can then take a look at how those pizzas' ingredients got to the pizzeria, then at how those ingredients got the warehouse centers, and finally at how those ingredients were grown and harvested in the first place. It's a simple but unfailingly useful way to teach about anything, really -- start with a familiar, extremely accessible example, then build on and extrapolate from that as far as you can. (As Paul Thomas Anderson once rightly opined, it's foolishness to start newbie film students on Battleship Potemkin; you start with Raging Bull, then work back to Potemkin.) The writers, researchers, and producers of America Revealed follow through on this approach with excellent consistency, milking every last drop of knowledge from, say, tracking the driving habits of suburban Texans, riding along on the rural route of an Arizona school bus driver, operating a combine harvester during a typical working day on a Kansas farm, or laying fiberoptic cable with a crew in Wyoming. 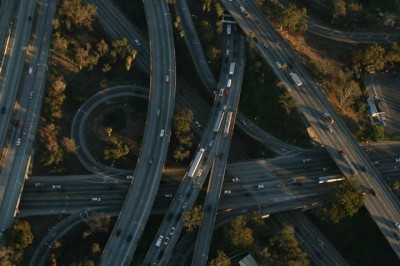 That America Revealed is an experience whose aesthetics are all shaped by how to most effectively convey information and increase understanding is best illustrated by its constant use of technology like GPS tracking, aerial/time-lapse photography, and computer-generated graphics to walk us all the way back for an abstract, symbolic look at the networks and processes it's been showing us in close-up, everyday action. A computer provides view-from-space looks at the U.S. or specific regions thereof while pulsating dots or animated lines show us the amassing loops made by the aforementioned bus driver and Texan commuters as they go about their itineraries, the overcrowded flight paths of our airways, or the many lines coming from all over the country (representing the food supply/transport chain) ultimately converging on that one restaurant in your neighborhood, enabling them to make that fresh pizza to deliver to your door. After exposure to these apt and memorable visual aids, you may never make a cell phone call, send an e-mail, or grocery shop again without mentally tracing your phone's signal from satellite to tower to underground cable network, or imagining your tomato's journey all the way back to the water that irrigated it (another whole journey and major component of infrastructure unto itself) through the technological marvel of modern harvesting and the interstate highway system that brought it from the point of delivery by the farmer to your produce aisle. 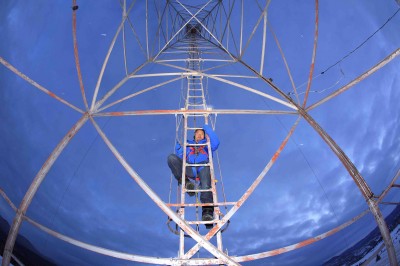 If it's slightly niggling that America Revealed is usually much more credulous than critical on a topic that does have such an inbuilt political dimension and all kinds of controversies arising from that, it should be commended for trying along the way to provoke at least some additional questions about the possible negative consequences and need to evolve when it comes to, for example, energy efficiency, environmental responsibility/sustainability, finite resources, the economically harsh loss of jobs that accompanies some of the amazing advances in automation it documents, or the metastasizing car/suburban-sprawl culture that threatens the quality of life in urban areas without the foresight to provide real, workable public mass-transit alternatives. That's a nice touch, but the core mission of America Revealed is actually so much more rudimentary and essential than that; before one can think critically about the ways in which our infrastructure channels the nation's unprecedented movement of necessities, electricity, information, consumer goods, and people, one first has to be aware of it -- have some idea of how it came to be and how it works. At that basic, vital, factual, relatively straightforward level of consciousness-raising, America Revealed has just the right solidity of frame of reference and lightness of touch to clue us in, in an appealing, retainable way, to what every American should know about how their country works. 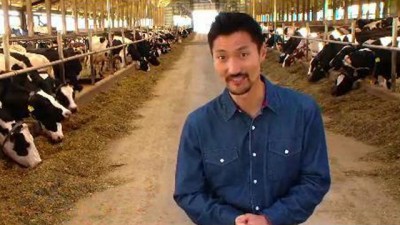 
America Revealed was originated on close to top-of-the-line DVD equipment, and the clarity and sharpness of digital video translates, as usual, very well to digital media; all colors, skin tones, and dark sections of the screen (relatively rare here) are pristine in this 1080i transfer presenting the program at its broadcast aspect ratio of 1.78:1.


There are both Dolby 2.0 stereo and 5.1 surround options; unusually for most television series, the surround sound here actually makes a noticeable difference, allowing (for better or worse) the incessant sonic stimuli of James Schweitzer's music and Kwon's narration more expansive breathing room. The sound quality itself (in either the stereo or surround track) is rich and vivid, with no distortion or imbalance.


Over the two Blu-ray discs, there are four extended scenes (3 min. each) and a "behind the scenes" (7 min.) in the form of a new interview with Kwon on the making of America Revealed with the footage under discussion (some of it outtakes/deletions) cut in as he recalls this or that tough day of shooting, etc.


A lively, zippy primer on the complex, dynamic systems of infrastructure that affect the life of every American in a way so basic that it's invisible to most of us, America Revealed can be grasped and appreciated by anyone (it would make excellent viewing for older elementary school and junior high school-age students) and should be seen by everyone. In this context, its more-gimmicky-than-strictly-necessary presentation (due, one would guess, to the producers' trying to appeal to the fan base series host Yul Kwon earned as a Survivor champion) is forgivable -- a spoonful of sugar for those in the TV audience (there are many) who find watching anything too informative/educational akin to taking nasty medicine. It doesn't detract at all from the vital, fascinating, sometimes disturbing facts -- always accompanied by effective visual aids and at least some historical context -- about the various centers, arterial systems, and lifebloods of the U.S.: our power, transport, food, and innovativeness, where they come from, and how they come to present themselves in our daily experience. It's a tall order to turn so much information about such a big, intricately detailed picture into something at once comprehensible, enlightening, and entertaining, but the producers of America Revealed pull it off with a gratifying degree of thoroughness and flair. Highly Recommended.