I was first made aware of the web series The Guild through my wife, who is a much brighter and charismatic creature than I. And my familiarity with Felicia Day past this show was limited to the popular Dr. Horrible's Sing-Along Blog which Joss Whedon created in the summer of 2008. However, Day had been writing, directing and starring in The Guild before Whedon's flash of inspiration and continues to do so now, with the web-exclusive show now in its fifth season, and perhaps at its own personal mecca of sorts.

For those unfamiliar with The Guild, the actual "Guild" is a group of six people who play an online role-playing game called 'The Game,' but similar in structure to "World of Warcraft" or "Second Life" as a comparison, where trivial matters are considered necessary in the game, almost as much so as the mystical. Day plays Codex (not her real name of course), the guild's priestess, who serves not only as the outsider's view into the group, but as the glue of sorts for the guild, which includes Zaboo (Sandeep Parikh), the guild's wizard and sorta love interest for Codex; Bladezz (Vincent Caso), the guild's rogue and who appeared in an internet meme; Vork (Jeff Lewis) , the guild's warrior and owner of a really creepy van; Clara (Robin Thorsen), the guild's mage and young mother; and Tinkerballa (Amy Okuda), the guild's ranger and starter of frequent dust-ups with Codex. The guild has various characters drift in and out of their septet, but their core remains the same as it has from the beginning. 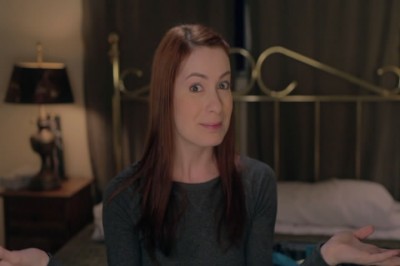 Season Five finds the group in a unique situation, as they all pack up in Vork's fan to go to MegaGameORama-Con, a gaming convention that looks an awful lot like the San Diego Comic-Con, and in fact some of the nuances of that Con seem to be borrowed for this one. The polite, almost condescending volunteered all dressed in the same golf shirt and khaki sets, the bartering and sometimes pleading for a different flavor of the same swag that vendors hand out and you stuff into the huge shoulder bag for posters, figures and the like. The bigger item that is fleshed out into a storyline is the lines, and Zaboo's desire to create and implement a smartphone app that talks to others and asks them to reserve seats in crowded convention spaces for one another in an attempt to help out friends and acquaintances get into desired sessions. As a strategy in theory it would be a great idea (as one who has been to Cons and experienced the lines firsthand), but Zaboo's power becomes all-consuming, and he subsists on ginseng, energy drinks and pixie sticks in an attempt to maintain the power. This is not the sole storyline that keeps moving through the show's dozen-episode run (which when put together runs at a feature-length 99 minutes), with the main one being Codex learning that the creator of the game the group plays has rolled out a new demo that has stripped most of the appealing factors for the die-hard fans, and she wants to try and stop the changes from being adopted as part of a sale of the game to a larger corporate entity.

To Day's credit, she sets up a backdrop for the show in this season where it is able to capitalize on its popularity and celebrity fans/Day collaborators can appear in the show as themselves and enjoy the laugh or two they receive in their brief moments on set. Self-identified 'geeks' like Nathan Fillion (Firefly) and Zachary Levi (Chuck) show up in cameos for the show, while other people that have appeared in older shows in the genre such as Erin Gray (Buck Rogers in the 25th Century) appear as someone like themselves, in Gray's case an actress from a short-lived science fiction show at the Con to chat with the fans. 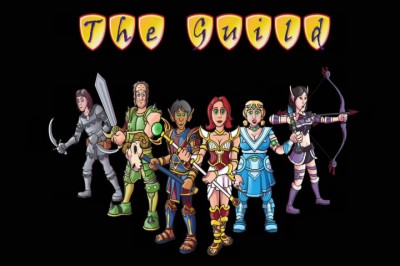 Throughout the show's entrances and departures, Day guardianship of the show is steadfast. We see her often in tight shots where she is speaking to the camera, both to sum up things we might have just experienced, along with her explaining her feelings and motivations for things to come. There is a quirky charm she provides that brings you into the show and allows you to both mock the members of her guild yet quietly identify with their emotions, no matter your place in life. Or to put it another way, the way Day keeps things moving along in the show with a mix of geekdom and more conventional wants and needs, I wouldn't mind putting her in my 5 to be sure. At the end of the day, her passion for the show and characters in it with their relatable causes and conflicts, The Guild is comfortable in its own skin, to say nothing of the skins of the virtual characters they have created.


All twelve episodes of Season Five of The Guild are presented in 1.78:1 anamorphic widescreen. The show would appear to split most of its time between handheld and steadicam shots, and the image is conveyed as naturally and accurately as possible. There is some crushing and moments of pixilation in darker scenes, but the brighter colors look vivid despite some moments of image noise, and Day's shayna punim looks as natural as you would expect on the stationary "confessional" shots. The episodes end rather awkwardly on the disc as if there is some sort of periodic layer change that occurs, but otherwise this is going to look about as good as you could expect.


Dolby stereo two-channel sound throughout the episodes. Considering the low fidelity nature of the show I can't say that I am surprised by this note, and the modest production values are further reflected in the sound, with all of the action coming from the front channels and little (if any) mirroring in back. The soundtrack is free of chirping or hissing and sounds clear as can be, and the overall result provides very little to complain about.


There are a few goodies and the low price point of the disc gives it better value than I was expecting. The cast provides a commentary for the episodes that is light but active, with some scene and location recollection by some of those involved. The soundstage is set up such that the guys are in one channel and the girls are in the other, and they talk about the real-life impact of the show to them and the guest stars who appeared here. It tends to run out of steam and even get a little loopy but it is a fun track. From there, a humorous look at the recap of Season Four is next (2:24), along with interviews with the cast (5:16) as they share some of their favorite moments from Season Five, with some on-set footage mixed into the segments. Three featurettes follow, starting with "Double Trouble" (4:17) a look at the filming Tinkerballa's sisters (or is it sister?) in the real-world. Expect Day in a long blonde wig here, by the way. "How to Build a Con" (6:01) is what it says, with the struggle on making the Con look like a Con discussed and shown. "Steampunk Verite" (4:17) shows us the costumes and gadgets of the steampunks that we witness in the season. A moderately amusing gag reel (3:30) is next, along with a table read (7:58) of what appears to be the first episode. There is also a PDF file of the script to peruse if you choose.


Season Five of The Guild is still going strong and even doubling down on the sci-fi nature of the show a little bit with all of the guest stars. But, at its heart it is a show about friendship and acceptance of everyone's tics, whatever they may be. If you are a fan of the show the extras make it a no-brainer to buy, but for n00bz to the show I'd recommend checking out an episode or two online before making the plunge.