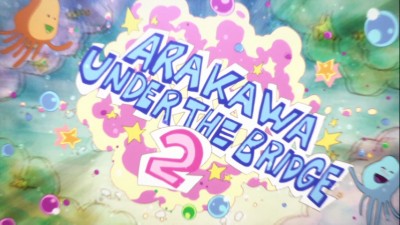 Arakawa Under the Bridge is based upon a Japanese manga created by Hikaru Nakamura.   It is a long-running publication that began with the release of volume one in 2005 and it isn't even completed yet. The twelfth volume is the most recent release and it was only released a few months ago in 2011. The anime adaptation resulted in two seasons that emphasized only portions of the manga series. It aired between April and December of 2011. Season two (as made available on this Blu-ray Premium Edition set) was entitled Arakawa Under the Bridge x Bridge (to reflect it as a second season in a creative way).

The series essentially focuses on a group of outcasts who are all extremely silly, serious, and everything in-between those realms. The central characters on the show are Recruit (Hiroshi Kamiya) and Nino (Maaya Sakamoto). Recruit's "real-name" is Ichinomiya Ko. I wasn't sure what I thought of Rec's character in the beginning but he turned out to be a great character. His family has a motto that says "Never be indebted to anyone", but as Arakawa Under the Bridge progresses it seems pretty clear that some of his views begin shifting. He almost died in the beginning of the series (during season one) and Nino is a nearby person who happens to save his life. Oh... about Nino. She's a Venusian. Not just your ordinary earthling.

The series focuses more on the day to day activities of these characters and their unique viewpoints and characterizations. It's all in the name of getting to know the characters... though there is a huge emphasis on the randomness of it all as well. I was reminded by watching this show what it felt like to experience FLCL for the first time. I think that the entirety of the first season of Arakawa captures this feeling, as do many moments that come from Arakawa Under the Bridge x Bridge. This is the kind of special anime that is capable of clicking with certain audience members astoundingly well and it's the sort of story one wants to share with friends.

Nino brings out a lot of the heart behind the series. She's a sweet, charming, and caring character who winds up choosing Rec as her "lover", and the pair becomes closer to one another over the course of the series run. One of the best elements of the series comes from watching the developing romance and friendship between Nino and Rec. She's the laidback one while Rec seems a bit too preoccupied with being "perfect" at the start to completely realize what he was lacking before meeting Nino. He was too focused on a possibility he thought he could reach... a perfection that is unattainable. For everyone ultimately needs the love and support of others to carry on. Rec's ambitions are quite relatable but it does take him some time to recognize some of the other elements of humanity the way he should.

There is a massive supporting cast on the show. When Rec is saved by Nino he decides (somewhat reluctantly) that he must do whatever she wants in order to stay out of her debt. So... he winds up living under a bridge with her and under that bridge he ends up meeting many strange inhabitants that make up an oddball family of free spirits. This doesn't sit well with him at first, but over the course of the series everyone becomes incredibly close and viewers are going to grow more familiar with the characters and thereby more invested in their individual stories. 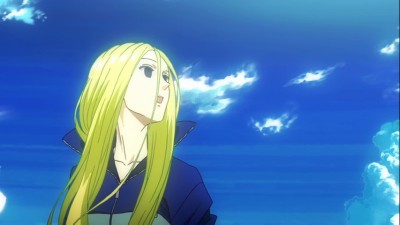 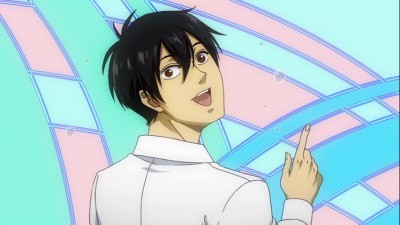 The Chief is the leader of the group (or so some say). He pretends to be a kappa, which is a mythological Japanese creature, and he wears a green suit to get the full effect. Hoshi is the wannabe rock star with a star-shaped happy-looking mask on his face (I loved a line where a characters watched him fall asleep running and said something "He's probably dreaming of playing at Budokan", a likely a reference to Maaya Sakamoto's anniversary show). Sister is... actually a dude dressed in a nun's outfit who is the source of the group's main spiritual setting (and he gives out cookies all the time). He's extremely obsessed with body building and the power of muscle. There are so many other additional supporting characters that in adding up the total tally there are easily about ten other characters I could continue talking about (if I wanted to drone-about endlessly). There's so much uniqueness on Arakawa in regards to these zany and fun characters.

The first season of the show (available in a Blu-ray/DVD combo release separate from this Arakawa Under the Bridge x Bridge release) was in no overestimation a truly magnificent series and it easily earned a great spot as one of the best anime series in recent years. There is no doubt that it will be the kind of series to find new fans year after year if a fanbase forms that is devoted enough to making sure that newcomers are aware of it. Arakawa Under the Bridge is the rare anime that deserves that kind of solid attention.

The second season just didn't manage to live up to the potential that was in place following the conclusion of the first season. The episodes were still hilarious in parts (a massive and notable positive) but the storytelling and characterizations suffered. The biggest issue was that the second season doesn't resolve all of the plot or story-related ideas it presents. A plot-line is introduced that suggests the characters might actually visit Venus (which isn't something that happens) and a few other elements don't entirely resolve by the ending.

This wasn't a major issue during the introductory season and I expected the same high level of craftsmanship this time around. Then there's the fact that some main characters were slightly out-of-character during certain moments (and this was particularly noticeable for Rec as he become almost a caricature of his philosophical and deep self during a multi-episode run that became increasingly weak in providing accurate characterization while working towards the concluding moments).

Arakawa Under the Bridge x Bridge was a weak season in comparison to the first. There were many moments of brilliance (one episode has romantic genius written all over it as more is revealed about Nino and Rec to one another through bizarre tape-recordings). It simply didn't compare to the brilliance radiating throughout the entire first season. But it does manage to offer some genuinely classic moments which are "sprinkled-throughout" with some of the most memorable anime characters regardless.  It does stumble a bit during this second season but a large part of that was because the manga still hasn't finished. Sadly, there might never be a third season, though I'd be thrilled if a surprise announcement arrived.

The conclusion is an open-ending (a sort of "meeting you halfway" conclusion) and the series doesn't give off vibes of being completely finished. I wish there was a third season. Even without knowing if more will ever be produced Arakawa Under the Bridge and Arakawa Under the Bridge x Bridge are entertaining, massively creative, and quirky good fun. 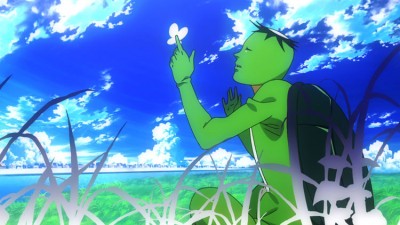 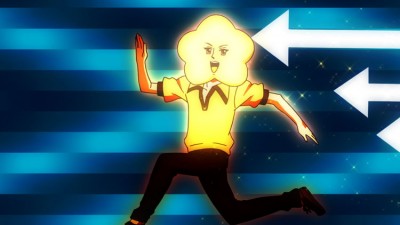 NIS America continues to release anime in North America with excellent (even stunning) transfers. This release of Arakawa Under the Bridge x Bridge features an amazing video presentation that captures the breathtaking animation with all of its lush details, found within the uniquely memorable character designs and the great animation backdrops. Viewers won't walk away feeling disappointed by the 1080p High Definition visuals. The series alternates between 1.78:1 and  2.:35:1 aspect ratios  (select scenes are presented in the wider scope for what I assume is intended as a more poetic or thrilling visual effect).

Please Note: The images featured in this review are from the DVD editions in this Blu-ray/DVD combo release.

The audio presentation is almost an equal match to the video. The Uncompressed PCM lossless 2.0 audio for the Japanese language dub is fantastic with sharp clarity, strong depth, and decent vitality.

The music and dialogue sound incredible! Arakawa Under the Bridge x Bridge has numerous sound effects that were utilized quite effectively with this noteworthy sound presentation.

Please be aware that the English subtitles are non-removable on these Blu-ray discs. These subtitles are larger in comparison to the first season's release (but it isn't hugely distracting and it becomes something easy to adjust to). There is also no English dub option; the only audio presentation available is for the Japanese audio. Don't worry about the dub quality though. The Japanese VA's were perfect for these characters.

The most notable bonus feature is arguably the fancy packaging available to this Premium Edition product. The oversized box makes it something that won't fit on the shelf with the typically standard packaging of Blu-ray's or DVD's but it will appeal to anime collectors. It doesn't disappoint! The art-box is beautiful with full-art on either side. 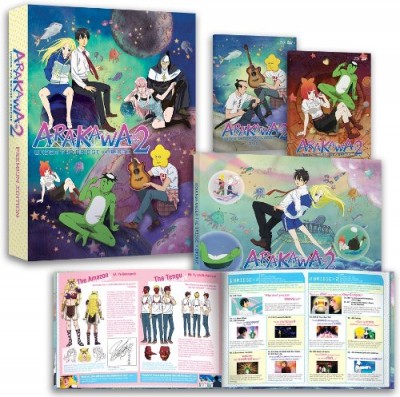 There is also an art-book inside featuring character notes, interview materials with cast members, a commentary featuring the original manga author, and more. This art-book contains over 30 pages of excellent information, artwork, and interview material. Fans should certainly enjoy this aspect of NIS releases. The included art-book used for this release of Arakawa Under the Bridge x Bridge was particularly well put together and satisfying to behold.

Episode commentaries are also included: these featured select members of the Japanese Voice Cast on episodes 1-4 of Arakawa Under the Bridge x Bridge.

Rounding out the extras are TV Promos, an End Card Gallery, and trailers for other NIS America releases. 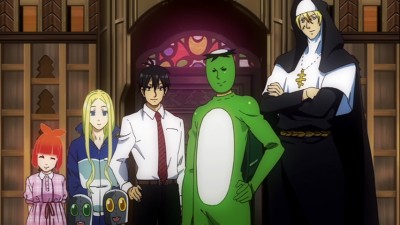 Arakawa Under the Bridge was one of my favorite delights in recent anime viewing. The second season (herein reviewed) was entitled Arakawa Under the Bridge x Bridge and it didn't quite manage to equally match the first season... it's still a beautiful anime with an immensely lush world of remarkable animation, solid characters, and comedic moments.

The pricing for the Premium Edition Blu-ray/DVD Combo release is expensive but worth it, and even more so considering the excellent video/audio presentation in combination with collector-worthy packaging and an art-book with plenty of material.