Love and loathing at the dog anti-beauty pageants 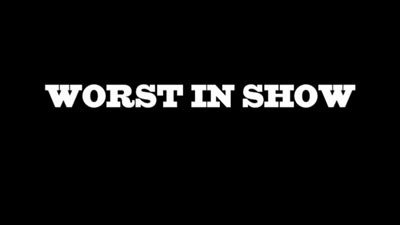 I've only had beautiful dogs, from Prince, my first dog (a German Shepard), through to my America Eskimo, Schnoodle and now my Poodle. Could I love an ugly dog? Possibly. I love dogs after all. But would it be easy? Looking at the stars of this show, I would say, probably not. Call me shallow or heartless, but these are some seriously ugly dogs. And the uglier the better for the sake of this film, which steps into the world of ugly dog pageants, which are just about as competitive as the purebred shows, and which feature some of the same types of people, who can be as ugly as their dogs, just more on the inside than on the outside.

The film focuses on four featured dogs, veteran show dog Rascal (owned by uber-competitive Dane), rookie ugly dog Icky (and his mohawked-owner Jon), reigning champ Pabst (with his laid-back pal Miles) and underdog Winston (and his mistress Ashley) as they prepare to do battle at the Petaluma World's Ugliest Dog competition. While we get to know each pair a bit, the movie also offers a recent history of the scene (including the truly horrific Sam and his sweet owner) and shares some thoughts from inside the show circuit and from academia's experts on why people are drawn to ugly dogs and the concept of ugliness in general. There are some truly fascinating elements to examine here, including the controversial nature of recent winners, which have included genuinely sick dogs, whose illnesses contributed to their "ugliness." The movie does a nice job of not just chronicling the ugly dog phenomenon, but analyzing it a bit as well. 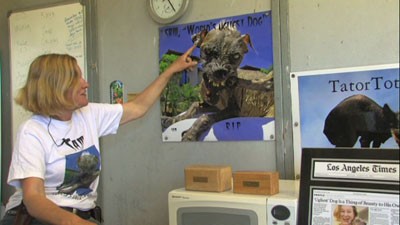 It's not just the dogs that are in the spotlight, but their owners as well, as the competition between them is naturally much more vicious, and no one is more aggressive than Dane, the superstar of the circuit, who's been showing dogs since he was 11. From his obsession with celebrities (which borders on cartoonish) to his ever-present camera crew to his obnoxiously competitive attitude, he's a ready-made villain, made all the more distasteful by the pleasant nature of the other featured owners, especially the understated Miles, who just doesn't belong in the pageant world (nor does his dog, who won the previous year despite suffering from just one relatively minor disfigurement.) The problem is, when exploring worlds like this, you run the risk of making fun of people who can't help themselves--whose only crime is having an unusual hobby and perhaps being a bit off socially.

If anything could be held against the film, it would be the structure, as the movie ends about 40 minutes in, and then gets stretched out by another 20 minutes by profiling another dog and it's owner. Thinking about it, there's no reason why this character couldn't have been integrated into the rest of the film, to build a more natural progression to the plot and create a more effective climax. Though the tacked-on tale is touching, pretty much all the drama is basically over at that point, so you're just hanging around waiting for it to end. 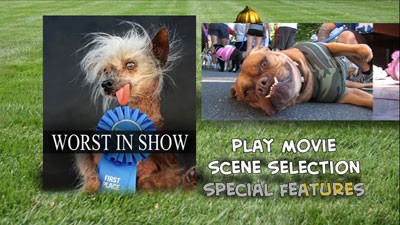 A one-disc release packed in a standard keepcase, this DVD has a slightly animated, anamorphic widescreen menu, with options to play the film, select scenes and check out the extras. There are no audio options or subtitles.

The anamorphic widescreen presentation is fine for the budget level of the film, presenting the video in a decent light, but it still looks like it was shot on prosumer cameras at best, with external scenes looking slightly soft, watered-down in terms of color and light on fine detail. Things get better when the movie goes indoors (perhaps due to lighting) but for some reason the article stills included suffer from wild, bizarre flashing. Overall, the movie looks a lot like a higher-end home movie.

The Dolby Digital 2.0 presentation is good for what it is, delivering a straight down the middle track that is clear and free of any distortion, but you're not going to find anything that either tests your system or impresses in any way.

The main extra is an audio commentary with Beck and Lewis, and it's a loose, jokey affair, that's unfortunately off sync with the film, so they mention things before they actually happen (not the worst sin, but annoying nonetheless.) Aside from that issue (and the fact that, unless you know to change audio channels, that the disc doesn't tell you the commentary exists), they talk a lot about the luck they had in getting many of the shots they have, and make fun of a lot of the people on-screen. It's an entertaining listen, but based on what they say, I don't think I'd hand them money for another film.

A bonus follow-up, "Winston Gets a Wheelchair" (3:37), shows one of the featured dogs getting some needed help from a good Samaritan, while there are seven deleted scenes showing more of the characters, including the first meeting between Icky and Rascal, which will only make you dislike Dane more, and one expert's initial, awesome reaction to Sam. There's also a commercial for Three Twins ice cream, which features a few of the featured dogs, and a gallery of Dane's photos of celebrities with Rascal.

The final extra is one of Beck and Lewis' earlier short films, Drag King. Running about eight minutes, it's a breezy look at the unique little world of the Fiberglass 500, a demolition derby where the goal isn't to hit the other cars, but to destroy the boats the cars drag behind them. There's not a lot of insight into the people involved, but it's an interesting curiosity. 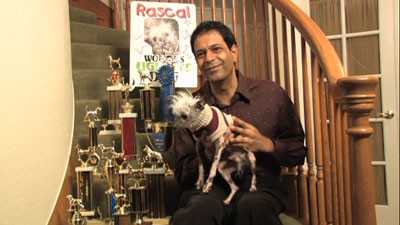 The self-absorbed (and even the aspiring self-absorbed) are perfect subjects for documentaries, because they tend to lack self-awareness and let down their guard, allowing the cameras capture the truth. Such is the case with Rascal's owner Dane, king of the world of ugly-dog "beauty" pageants. The problem is, he's really the only such character here, with everyone else coming off as good people with a quirky hobby. That's sweet and touching, but it lacks the next-level drama and/or comedy a great documentary offers. The presentation is fine for a low-budget presentation, and there's a healthy amount of bonus content, making it worth your while to check it out.