As a Dragon Age fan who has beaten both video games, I'm squarely in the target audience for Dragon Age Redemption. This miniseries, which originally aired on the web, takes place in the world of Dragon Age II. Its primary purpose is to whet your appetite for a $10 downloadable add-on, Mark of the Assassin. I wasn't as geeked about Dragon Age II as the first one--it attempted to lure casual gamers at the expense of its game mechanics. As a result, I never sought out any add-on's. This review of the Dragon Age Redemption DVD was just the excuse I needed to dive in.

Dragon Age Redemption follows the tale of Tallis (Felicia Day), a flirty, elf rogue who swears loyalty to the Qunari. The Qunari promise to restore Tallis' status and rank if she accomplishes her quest. Her task is to hunt down an evil blood mage, Saarebus (Doug Jones), who escaped from a templar prison. Along the way, she gathers a group of allies who also want to see Saarebus defeated for their own reasons.

The story is standard fare for fantasy fans. It's a safe and simple vehicle to introduce Tallis into the Dragon Age universe. This entire series could easily have been a downloadable, in-game sidequest. BioWare, however, chose the more difficult, and possibly less profitable, path to produce a much more fan-engaging experience. I applaud Bioware for their innovation and willingness to take a risk. Dragon Age Redemption is hardly the first multimedia gaming experience, but its execution eclipses all others. BioWare's passion for their franchises is a major reason why their company consistently sets the standard in gaming. BioWare's top franchise, Mass Effect, is begging for similar treatment--or at least I'm begging.

To produce Dragon Age Redemption, BioWare chose perhaps the most capable person of making it a success, Felicia Day. She's an accomplished and popular web series producer, writer, and actor. More importantly, she was already a fan of the Dragon Age games. Her love for Dragon Age is visible on the screen; you feel like she's living the dream while making this project. 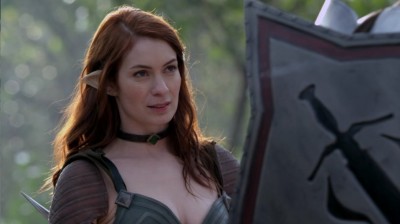 While Dragon Age fans will easily follow the story, Dragon Age Redemption does not stand on its own. The show drops a few nuggets of background information at the beginning of each episode. It's enough to jog the memory of Dragon Age fans about necessary details, but falls far short in making newbies care about the story.

Felicia Day's portrayal of Tallis is frustratingly inconsistent. She is merciful at times, and a cold blooded assassin at other times. Even after playing the video game and watching this DVD, it's not clear where Tallis draws this moral line or if she is just random. At one point Tallis flings a dagger into the gut of Josmael, a little mage boy, just to prove that he's a legit healer. The scene established Tallis as a badass rogue, but it was harshly out of character for someone capable of mercy. Was she just in a bad mood and needed to stab a teenager?

Saarebas, the main villain, is refreshingly simple. Without revealing any spoilers, Saarebas divulges his motivation in the final episode. In most circumstances, I would decry his reasoning as a cop-out and bad writing. However, considering Saarebas' origin in the Dragon Age universe, his malevolence makes complete sense. Well played--even if he does look like Maurice from Little Monsters. 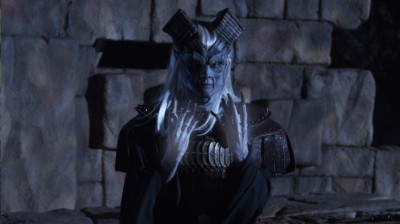 With one notable exception, the supporting cast is by-the-numbers. Cairn (Adam Rayner) is an uptight templar who loosens up as the series progresses. Josmael (Masam Holden) fills the mandatory mage slot of the group, but his character and motives are never compelling. Outside of wielding magic, he's inconsequential to the entire story. If Tallis' dagger had actually killed Josmael and his subplot, not much would have changed.

Nyree (Marcia Battise), a mercenary enemy-turned-ally, is the star of the group. She willingly serves the highest bidder and simply enjoys cutting people up. Her scenes are always delightfully bizarre, such as the one where she seduces innocent, little Josmael. Unfortunately, Nyree's grand entrance into the story occurs much too late, denying her the full spotlight that she deserves. Nyree needs to make an appearance in Dragon Age III, or perhaps in another Dragon Age II add-on. 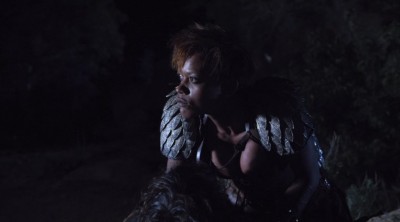 My wife unknowingly served as a baseline for this review. She has never played Dragon Age, but she loves Felicia Day's work on her ongoing web series, The Guild. For what it's worth, my wife's eyes glazed over after two episodes of Dragon Age Redemption and she went back to surfing the internet.

On the flip side, I enjoyed the series. Tallis' character and story sparked my interest enough that I dropped $10 and downloaded the Mark of the Assassin add-on. If, for no other reason, than to try to make out with Tallis in the game. This low-budget web series rekindled my interest in a game that I had no intention of ever spinning in my Xbox 360 again. Mission Accomplished.

Sound: The sound is in clear Dolby Digital 2.0 and is adequate with some directionality.

Video: The video is presented in 16:9 anamorphic widescreen. For a web series, its sharp details and film-like quality are impressive. The effects and costumes in the show are obviously not up to Hollywood standards, but are not cheap looking either. The designers did phenomenal work at recreating the Dragon Age look in real life. Redemption's visuals are reminiscent of a mid-90's, syndicated fantasy series such as Xena.

Extras: The DVD includes several behind-the-scenes vignettes including the casting, set design, costume design, stunts, and outtakes. Also included are trailers for the web series and the video games.

Bottom Line: I'm giving this review two scores. For its target audience, Dragon Age fanboys, this series is Highly Recommended. If you fit into that category and haven't already seen it, then you're long overdue. The story and characters fit in snuggly within established Dragon Age lore. After the show, you'll sprint to your Xbox 360, throw down for the add-on, and indulge in another 5 hours of Dragon Age goodness.

For the rest of the world, this DVD is worth a shot for fans of fantasy or role playing games. However, without fully immersing yourself in a Dragon Age game for 70+ hours, there are probably not enough juicy morsels of characterization to make new viewers give a steaming pile of Wyvern poop about what happens. With only a 50 minute runtime, the series goes by fast, and you can watch it free online. Its quality is an impressive feat considering the budget and time constraints that the producers had to overcome. Recommended.