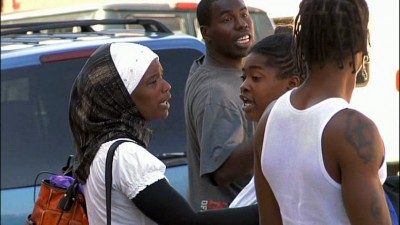 "How can the President of the United States be a black man? I never thought I'd see that in my lifetime. But while I'm seeing the president on television and the images of him leading the free world, I'm still burying black kids. It just doesn't make sense to me." - Spencer Leak, Director, Leak & Sons Funeral Home of Chicago, speaking in The Interrupters

Back in 1994, director Steve James emerged the principal creator of one of the best-known and most-admired American documentaries in memory, Hoop Dreams--the exhilarating and wrenching story of two young African-American men from the Chicago projects whose hoped-for and worked-for way out of the socioeconomic dead-end of the ghetto was their pursuit of successful basketball careers. That was a document of exceptional kids who one hoped would find their way out of their "bad" neighborhoods--racist traps that segregated them from the kind of future-directed, aspirant way of thinking that is, tragically, a luxury often necessarily forgone in the by-necessity more survival-oriented ghetto world of poverty, marginalization, violence, and desperation. Now, at a contemporary moment when bullying and viral-video violence has become a national commonplace/disgrace and the degree of gang-related violence in Chicago, particularly among minority youth, has been especially staggering (prompting, as we are shown in the film, consideration of calling in National Guard to curb it), James has revisited some of Chicago's rougher neighborhoods and documented people who, rather than understandably seeking a way out to a better, safer environment, are sticking around and trying to reclaim their neighborhoods, staking a claim to their environment and making it better and safer. The result of the year that James spent with these concerned citizens who actually walk their anti-violence talk, making sacrifices and sometimes putting their own safety on the line in the process, is his latest compelling, informative, and sure to be long-remembered and -revisited picture, The Interrupters. 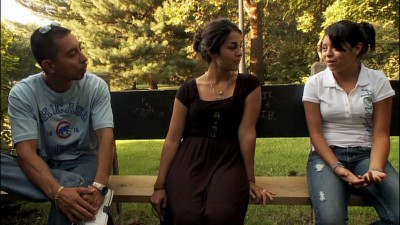 Inspired by a New York Times article on the topic by There Are No Children Here author Alex Kotlowitz (also named as co-producer on the film) and armed with a digital video camera (and doing most of the shooting himself), James has chosen as The Interrupters's subject the CeaseFire Group--an organization founded by an epidemiologist, Dr. Gary Slutkin, who noticed and made a study of the similarities between the way a disease spreads and the way violence is transmitted, and then decided to apply those principles, founding (along with one of the film's interviewees, Tio Hardiman, who acts as CeaseFire CEO and goes into further detail on what the organization is about) an action group based on them in an effort to reduce the alarming mortality caused in the U.S. by violence whose transmission could be "interrupted" by the right people using the right tactics. James then focuses in on some of CeaseFire's most compelling personalities, who work out in the field of Chicago's most violent, gang-heavy neighborhoods, and this is where the drama of the film comes in and demands our engagement and investment: these people, virtually all of whom were "scared straight" or otherwise inspired to leave behind their own histories of crime and gang-related violence, are fighting for the lives of other people like them who are facing the same pressures and risks they faced and managed to evade. Neither these antiviolence activists/workers nor the film have any rose-colored illusions about the insidious, very strong enemy they're facing or the toughness of the battle; the successful outcome of their project is, on a case-by-case basis, far from guaranteed. 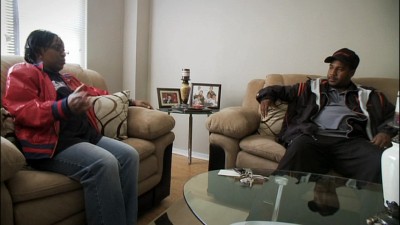 Each of the three principal CeaseFire workers we get to know were chosen for their positions, and are so effective at doing the interventional work they do, because they retain their connections to and credibility among the street life of their neighborhoods, where police racism and harassment has made residents reluctant to cooperate with the law. Ameena Matthews was the neglected daughter of a notorious old-school Chicago gangster whose struggling, abusive family life led her to seek an escape route through a behavior pattern of crime and flirtations with violence that, as she describes it, was like an addiction. At a low point, Matthews found a more effective and constructive way to transcend the raw deal life handed her: converting to Islam and dedicating her energies to curbing the destructive effects of a life of crime and violence, the very real allure as well as the self-destructiveness of which she understands all too well from her own experience. Cobe Williams, the chief administrator of CeaseFire, now lives in relative comfort and safety in the suburbs with his wife and family, but he is there every working day in Englewood and other "inner-city" (read: crime-ridden) neighborhoods he came from, staying connected to the grandmother whose support eventually became his lifeline and even to the mother whose substance abuse-driven neglect put him on the path to his own career as a gangster, trying to stop people from hurting themselves by letting the feelings of rage and powerlessness he can so completely relate to lead them to hurt others. Eddie Bocanegra is the son of a Mexican immigrant who, after watching his father work long, physically ruinous hours as a mechanic turned his son off of the idea of knocking himself out to such unsatisfactory results, became a gangbanger and expert car thief to attain his flashy vision of an American Dream from which his family was automatically disqualified.

The scenes of these toughened, intransigent souls as they work with those facing past or current violence in their lives--Matthews with a drug-abusing, physically violent young woman who unpredictably gives her hope for improvement one day only to backslide horribly the next; Williams with a young man who is revisiting and making a difficult apology to a barber-shop staff he had traumatized years earlier in a holdup; Bocanegra with a preteen girl working through the loss of her older brother to gang violence, just to cite some of the most salient examples--are its heart, the moments that complement those where we have seen CeaseFire's mission described in words with images of that mission in sometimes messy action, and they are by turns compelling, nail-biting, and heartbreaking. James's camera captures each individual as a human being whose hopes and fears are immediate, unquestionably worthy of our attention, and entirely relatable, no matter their mistakes or difficulties, or how dissimilar they may be from those of us who haven't been faced with such grave circumstances in our own lives. 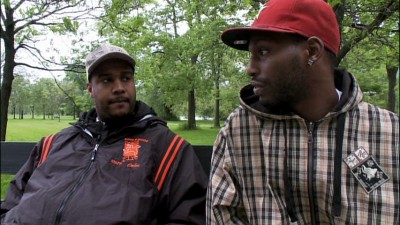 James's on-the-ground dedication to the project is evident in the multiple, rich, well-connected/contrasted details and points of view (shown via improvised, handheld, but focused compositions that James handles with as much care as possible while keeping up with the sometimes very hectic conversations and actions he needs to get on video) with which the film is replete. He has done a simply expert, tireless job of recording and structuring the chaotic lives of his protagonists/subjects into narratives that are very cohesive and accessible but never reductive, allowing us a close look at the complexities--the many frustrations and, sometimes, rewarding accomplishments--of the work that Matthews, Williams, and Bocanegra are doing.

CeaseFire's aim is simple, but not without its controversies: they practice tough love as needed (Matthews is especially good at looking people in the eye and telling them harsh truths about themselves that they need to face for their own good), but the group is considered by some to be enabling the perpetrators of violence, as they are not in the business of making value judgments and have no grand aspiration to Ending Gang Activity, just to preventing its worst, most tragic consequences. That, as the film demonstrates, is a tall enough order, but the group definitely has its critics. James, obviously, is not among them, and he has created a well-reasoned and open-minded but, more importantly, very revealing and very moving testimonial that lets us see for ourselves how tough, complicated, and necessary CeaseFire's project is. The kind of intervention that the organization's workers perform is a long, arduous, and sometimes actually physically dangerous process that, like dealing with biological epidemics or people with addictions (the two analogies for patterns of violence that get the most traction from what James shows us) is slow, frustrating, and prone to seemingly endless reversals and setbacks. That these imperfect but brave, strong, and astonishingly generous and dedicated people accept their often Sisyphean task with such energy, inspiration, and stamina is a sort of miracle, and despite the ongoing uncertainty of the fates of the at-risk people they are trying to help, the fact that they live with that uncertainty and just forge ahead so indefatigably makes them some of the most truly remarkable cinematic heroes we're ever likely to come across. 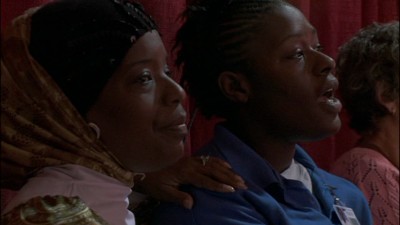 
The anamorphic-widescreen 1.78:1 aspect ratio transfer of James's high-def digital video images to DVD is nicely done, with a minimum of edge enhancement, aliasing, or other flaws. Most of the very infrequent visual anomalies one can spot, such as the "waviness" on blinds or on a particular chair pattern with many horizontal lines, seem to be from the videography done with uncontrolled light under documentary circumstances and do not seem out of place or distracting in context.


The Dolby Digital 5.1 soundtrack is flawless, conveying the film's sound (caught on the fly, documentary-style, but remarkably clear for that) cleanly and fully, with no distortion or imbalance. One can especially appreciate the 5.1 range in the deep notes of Joshua Abrams's hip-hip-inflected score.


There's about an hour of additional footage that, in addition to going further into the occasionally contentious inner workings of CeaseFire as they discuss and debate matters of principle and plans of action, also delves deeper into the stories of Matthews, Williams, and Bocanegra, expanding them out a bit and letting us get to know these personalities a little better in a more relaxed manner that's not tied to the film's narrative demands. These outtakes make an excellent appendix and should be watched directly following the main feature; it's like extending a visit with people whose company you've found especially rewarding. Extras also include a brief behind-the-scenes with composer Joshua Abrams and the film's theatrical trailer.


It's been over 15 years since documentarian Steve James directed our attention to a deep-rooted social problem through an indelibly compelling film with Hoop Dreams, and he very nearly reaches those heights again with The Interrupters. The film examines the same problem that was at the heart of Hoop Dreams--the cycle of inner-city underprivilege, economic despair, and violence that affects African-Americans at an appallingly disproportionate rate--from a different angle, focusing this time on people who have had involvements in and narrow escapes from gang-related violence and, rather than escaping to safer havens, have stuck around and are now working in a concerted hands-on effort to directly curb escalations of violence--to actually better the violence-afflicted neighborhoods for those who live there don't have recourse to already "better" neighborhoods. This is a challenging, often frustrating, and absolutely vital mission, which James (who shot the film) and his skilled postproduction team have rendered onscreen with a vividness and true-to-life complexity that never lets the people and situations being shown, or the particular difficulties and aspirations of their lives, seem anything less than immediately, recognizably real. The film is an excellent example of social/political reportage that transmits its intelligent, empathetic point of view not by preaching or theorizing, but through conscientious, careful, and adroit use of the cinematic apparatus to tell us the story and convince us of its importance, involving and implicating us in a deep and genuinely provocative, inspiring, and affecting way. Highly Recommended