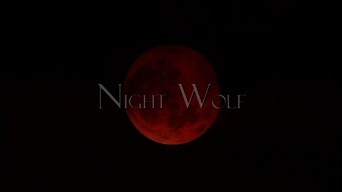 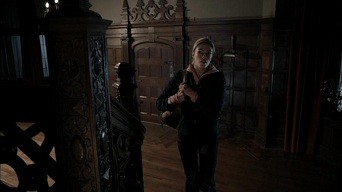 Lionsgate's DVD cover art for their upcoming release of the British import Night Wolf is chuckle-worthy. The text "FROM A PRODUCER OF DOG SOLDIERS" is not only highlighted in red on the front, but it's also repeated front and center on the back. Seriously? That's this movie's calling card? Some producer from Neil Marshall's decade-old werewolf film helped see Night Wolf through - and that's the most noteworthy thing about it? That seems like a stretch, especially considering how few casual American filmgoers (not counting us geeky horror movie fans) have likely even heard of Dog Soldiers. Ah well, Lionsgate clearly wanted to make the connection for us in their advertising for this product, and they succeeded on that point. 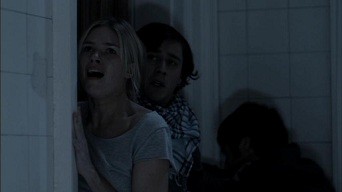 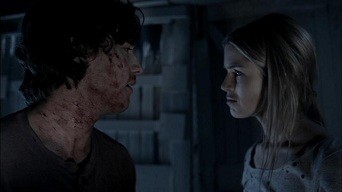 In any case, Night Wolf possesses elements that should have worked better than they ultimately do. A lot of old-school Hammer trappings are here: a wooded and isolated countryside setting with a creaky old mansion, a night storm offering plenty of thunder and lightning, the specter of a werewolf creature, and a pleasant young actress playing the heroine. Unfortunately, while Johnathan Glendening's direction demonstrates some spark, the screenplay by Adam Phillips lets the whole affair down with unlikeable characters and an ending that operates on an internal logic but disappoints from a dramatic standpoint.

Night Wolf tells the story of Sarah (Isabella Calthorpe), a young Brit who has returned home on leave from her career in San Francisco. There, she finds her stepfather at wit's end, her mother absent assumedly with a lover, and her brothers and best friend (Gemma Atkinson) boozing it up in a barn. The house is in a similar state of disrepair as the characters themselves in this dysfunctional family. Soon, however, with a power outage due to the storm, Sarah and her family find themselves suddenly and unexpectedly stalked by a creature that menaces and kills them one by one.

Night Wolf, to be honest, has a simple premise. In many ways, it follows the conventions of an early '80s slasher film substituting a creature for a masked madman. The heroine is a responsible and capable young woman - and like Jamie Lee Curtis in Halloween, she's given a maternal side. In this case, Sarah has a 13-year-old brother Luke who she tries to look after. The werewolf's cannon fodder are the typical Friday the 13th-style partying teens who smoke pot, drink a lot of alcohol, and are randy as heck. They're iced one by one in fairly regular intervals through the movie's runtime. Et cetera.

I don't mind all that familiarity. Genre conventions are conventions because they tend to work. Here, however, the characters seem to just snipe at one another, even when they're under duress. It's hard to root for characters when they're not rooting for each other. Isabella Calthorpe is a pleasant actress with a nice screen presence, but her character's plight is marred by some rather catty remarks to others; thus, the Final Girl of the film doesn't rise above the other characters in the personality department. Even the cop and animal trainer called out to the teens' rescue are decidedly hostile toward one another. Why?

Other problems exist with this story. Like all horror films set in contemporary times, for example, Night Wolf has to explain why a group of teens and twenty-somethings do not have or cannot access their cell phones to contact help. A scene where each character remarks upon why they don't have their cell phone (one has hers packed in a bag, another had his "ruined at the pub," etc.) plays off like an absurd comedy of errors - though it does offer the best line of the film, when a character finally asks if anyone can get a carrier pigeon. Horror hounds will also feel a bit let down by the kills. The gore effects are passable, but the majority of the violence is left off screen. Cheesy red-tinted "creature cam" sequences feel precisely that: cheesy. Finally, let's leave the ending unspoiled; it has a twist that makes sense but it somehow still feels like a cheat.

So, ultimately, Night Wolf has some promising elements but they never fully get realized thanks primarily to ill-conceived characters. The movie by no means is a dud, but the best I can go with here is a "Rent It" recommendation. 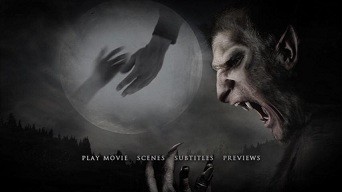 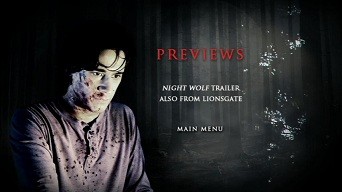 Lionsgate gives Night Wolf an anamorphic widescreen presentation with a 1.78:1 aspect ratio. While I can't be certain, I suspect this likely reflects the movie's original theatrical exhibition. The movie itself operates in semi-darkness for a good chunk of its runtime, but details remain sharp throughout.

The lone audio track is an English language Dolby Digital 5.1 affair. American viewers might have difficulty at times with the thick British accents, but that's no fault of the track itself, which offers the dialogue clearly in a fairly dynamic mix. Optional subtitles in English and Spanish are available.

Trailers for Hyenas, The Hunters, Wolf Moon, and Daybreakers as well as a commercial for epix precede the main menu. They're accessible via a Previews submenu along with a trailer for Night Wolf itself. And that's it in the extras department.

A classic Hammer-style setting and creature as well as a pleasant screen presence by lead actress Isabella Calthorpe cannot fully compensate for Night Wolf's unlikeable characters and disappointing ending. Given the DVD's lack of significant extras, Night Wolf is best viewed as a rental.