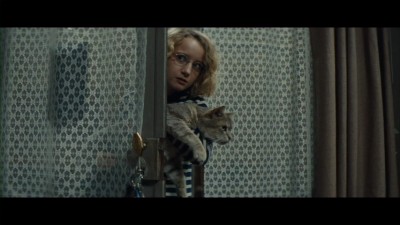 We've all seen characters like The Hedgehog's Renée (Josiane Balasko, French Twist) a million times before; she's the Gallic version of Miss Havisham, or Clint Eastwood in Gran Torino, or Ben Kingsley's Georges Méliès in Hugo, etc., etc. ad nauseum -- the grumpy-on-the-outside older person whose crusty exterior disguises an interesting past and/or golden-heartedness you'd never have guessed if it weren't unlocked in the course of the story by some persistent younger catalyst. In fact, the entire film takes place in very familiar narrative and aesthetic territory; it's not just its story's predictability that planes away anything that might stand out, but its copycat dutifulness in presenting its characters and their situations to us, with little to individuate either its grumpy old lady or its precocious preteen, Paloma (Garance le Guillermic) from their forebears (the angstiness of Paloma in particular is a sub-American Beauty knockoff, with a lack of insight that makes her questioning of her parents' and older sister's unhappy bourgeoisie-isms come off as actually condescending). Still the film holds, if not exactly a trove of buried pleasures, then at least a few treasurable moments and attributes that raise it up from the level of the absolutely, unforgivably formulaic all the way up to that of not-entirely-bad mixed bag. 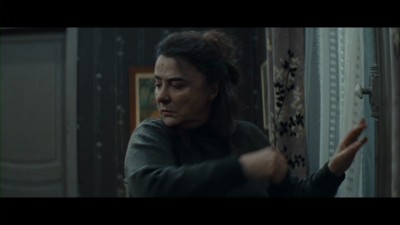 The uninteresting junk that has to be sifted through comes, unfortunately, mostly in the form of the film's "A" story, which centers on the upstairs life of a high-priced Parisian apartment building, where Paloma lives with her boy- and school-preoccupied older sister, a distractedly careerist government-official father, and a neurotic mother who's addicted to therapy, pills, and champagne. This is an easily sitcom-able family situation and dynamic, and it's played that way more or less to a T: Paloma, despite the clearly talented young Guillermic's best efforts and physical suitability (she's slightly too tall for her age, slightly gangly, bespectacled, sharp-featured), is one-dimensional, with the narrative conceit of her omnipresent video camera trying and failing to make her and her family life (shown for the most part, in one of the film's view visual chances taken, through Paloma's videotaped observations) something of dramatic interest; the film obviously mistakes her most superficial sitcom attributes as something compelling and offers precious little else to flesh her out as a character, which gives us nothing more than the knowledge of what it might have been like had the bratty, bookish, comic-relief kid sister in Hitchcock's Shadow of a Doubt been the star of the show. 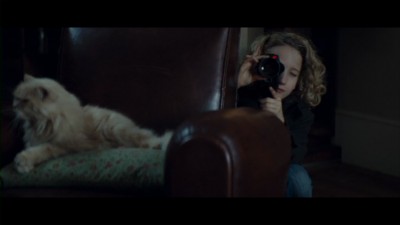 What little we do glimpse of Paloma's less facilely categorizable personality -- her artistic ambitions, habitual drawing, and study of Japanese with its accompanying interest in Asian cultures -- segues us right away from her and into the film's better self, the "B"/"downstairs" story of Renée, the building's super, who lives alone with her big, perpetually unimpressed cat and has half of her first-floor little servant's apartment locked off and consecrated as a library jam-packed with tomes including those by her favorite, Leo Tolstoy (after whom she named her cat). With her knowledge of that secret library, Paloma has always been more accepting of and curious about Renée than most of the building's residents; the youngster has also developed an immediate rapport with the building's newest resident, a Japanese gentleman whose name, Kakuro Ozu (Togo Igawa), provides the film its sole whiff of anything cinephilic. By chance, the fact that Renée shares her very well-hidden, generally fine and quite cultured sensibility and enthusiasms with Mr. Ozu, a widower whose Zen handsomeness Renée is drawn to despite herself, is revealed, and an extremely fragile, tentative hope that there's another person in the world she could connect with, and even love, begins to bring Renée out of the shell she's completely pulled herself into during the 15 years since her husband passed away. 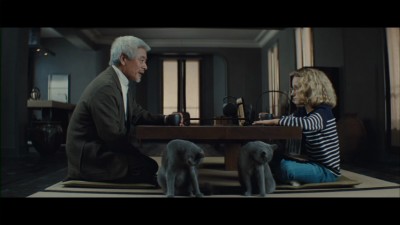 Knowing that everything's clear in retrospect and that we're looking at the end product of a very involved process, it's an unfair game we play with films that ultimately fail, "if only they'd done this instead of that." But the contrast in The Hedgehog between its occasional bright spots and its much more frequent banality virtually defies us not to think about how different the film would have been had Renée and Mr. Ozu's friendship (and possibly more) been given their rightful place at its center, with Paloma (whose "problems" as conveyed to us, up to and including her faux-suicidality, are a yawn that just keeps getting wider) allowed to remain as a uniquely relevant but still minor facilitator of what really feels important here. (Those important matters extend to the great value of loving books and movies and cats and the joy of sharing that love with others, all of which are celebrated openly by the film, and all things toward which this reviewer is predictably biased.) There are scattered, genuinely cute little animated bits when Paloma's drawings of her friends and neighbors come to life, but otherwise, the film's one truly memorable visual and dramatic moment, when Renée and her new friend watch an Ozu film (The Munekata Sisters) together, is exclusively about these well-played, interesting characters; there's no dialogue, no camera movement, and no fancy editing on this occasion, but it's pure cinema, and it honestly makes the rest of the film, shot pleasantly and competently enough by DP Patrick Bossier (Vagabond) but with almost all framing, composition, and mise-en-scène done strictly by the book (and that includes the "shock" ending, which doesn't move nearly as deeply as Renée's discreetly wiping her eyes after the film ends) seem markedly lesser by comparison. Paloma learns her lesson about valuing her luck and life in general, no matter how imperfect it is, but the lesson the film actually imparts is something quite different: It illustrates in no uncertain terms that if you want your movie to have its own particular feel and interest, you have to leave some "crowd-pleasing" timidity behind, be decisive and discerning about the tougher narrative and aesthetic choices, and take at least some chances to let your (purported) interest in the story make its way to the audience. Otherwise, you're flirting with dullness, which is a state The Hedgehog succumbs to often enough that one viewing is more than enough. 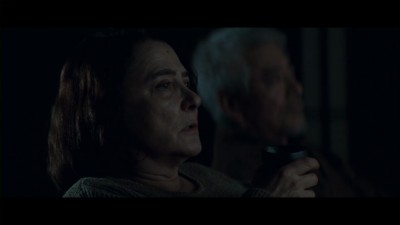 
The widescreen-anamorphic transfer of the film, at its original 2.35:1 aspect ratio, is fair. The colors and skin tones are all bright, solid, and stable, and there is no remarkable overabundance of edge enhancement, but there is a flatness and lack of texture to the image throughout that suggests overuse of digital noise reduction (DNR), and there are also some badly unstable blacks, most readily discernible in the credit sequences.


The film's soundtrack (in French with optional English subtitles, along with a Spanish subtitle option) is selectable as either a Dolby Digital 2.0 Stereo or a Dolby Digital 5.1 Surround track, and both have excellent clarity, depth, and resonance, with no distortion or imbalance whatsoever.


Not too much; just a handful of minor deleted scenes, a slideshow/photo gallery, and the film's U.S. theatrical trailer. 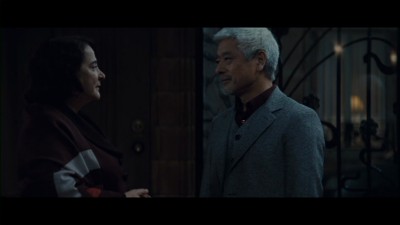 
More a "first foreign film" for the precocious child in your life than anything very inspired or engaging for any grown-up who's seen their share of movies, Mona Achache's The Hedgehog has one or two charms that surmount even the film's plodding whimsy and conventional direction. Foremost among these is an actually quite good performance by Josiane Balasko (working, it must be said, against the dampening, middle-of-the-road current of the filmmaking) as the "hedgehog" of the title, Renée -- a poor, middle-aged superintendent of a Parisian apartment building and a widow/spinster with a secret bibliophilia who, à la Bette Davis in Now, Voyager, just needs to get a haircut, a nice dress, and start taking care of herself in order to reveal her beauty and brilliance to the world and snag that perfect man. The man in question is another of the film's assets: a Japanese widower named after the filmmaker Ozu (how could a film this bland in style have been made by anyone with any knowledge of Ozu's sublimity?) who is a magically perfect match for Renée. The film is also a goldmine for anyone who's out of the closet as an utterly biased sucker for cats, books, and films (guilty!); if that describes you at all, there's content galore to make you feel warm 'n cozy. The film's other "main" story, involving a beyond-her-years and quasi-nihilistic pre-adolescent rich girl, Paloma (Garance le Guillermic) who learns an important life lesson from her well-off but dysfunctional family's superficially grouchy super, is strictly Hallmark and rapidly becomes too stereotypical disaffected-teen preciousness to make any significant impact. The film is worth a glance, and even actually moving and engaging despite itself at certain intervals. On the whole, though, it's more of a cloistered-in hedgehog of a movie than is good for it, with a predictability and conventionality that make it feel like it was conceived in a vacuum and manufactured too closely to specifications too neat and tidy to allow for much cinematic personality or vision, or to let us get very involved in its obligatorily life-affirming coincidences and indulgences. Rent It.