Cry of the Heart

1974 French obscurity Cry of the Heart (a.k.a. Le Cri Du Coeur) is a decent if over-the-top family drama which is given a strange treatment with its U.S. DVD release. Based on the packaging and the description on the back, it appears to be a heartfelt tale of a woman (Stephane Audran) adjusting to life after divorce with her teenage son in tow -- kind of a Gallic Alice Doesn't Live Here Anymore. The actual film, however, winds up being a much darker, kinkier tale that focuses squarely on the boy, played by a histrionic young actor named Eric Damian.

In the film, Damian's character Alexandre has a debilitating accident which turns him into a twisted, manipulative little brat. Personally, that sounds like a much more intriguing concept, but not so fast, amigo. This is one of those films that operates in an alternate universe free of things like logic and reason. The script is riddled with inconsistencies, with director/screenwriter Claude Lallemand attempting to simultaneously make it an emotional family drama and a psycho-kid thriller -- and coming up short on both counts.

In Cry of the Heart's opening scenes, Alexander is seen as a normal teenager palling around with best friend Alain (Emmanual Dessablet) and comparing notes on the girls in their school. The slightly older Alain has a girlfriend that he regularly has sex with (or so he says), which is something that the less confident Alexander yearns for. Returning from school to his lavish, castle-like home, Alexander becomes preoccupied by a kite stuck up in a tall, tall tree (why would a horned-up teen care about a kite?). Since his father, Mathieu (Maurice Ronet), is busy rushing off to work, he can't help out. Mother Claire (Audran) is seen rushing off somewhere, too (to have a tryst with her lover, as it turns out - this is a 1970s French film, after all). Attempting to retrieve the kite himself, Alexander ends up having a bad fall which results in the partial loss of one leg and the paralyzing of the other.

At this point, Alexander's disability could either be treated as a "triumph over adversity" inspirational tale or a Hitchcockian thriller in which an already neurotic kid grows more obsessive which each passing day. Luckily the film delves into the latter scenario (although it's clumsily executed at every turn), with Alexander using his condition to expose his family's disfunction like a bloody, gaping wound. At first, his guilt-ridden parents take extra steps to make the home more comfortable for Alexander. They sell off his horse and grand piano, install an elevator in the home, and lavish him with gifts. The sudden attention, however, makes him an even bigger brat than they would ever imagine.

One of Alexander's new gifts, an expensive camera with telephoto lens, becomes the ultimate voyeuristic tool for this still-horny, dangerously manipulative kid. Accompanied by the housekeeper (who hilariously helps out), he takes jaunts to the local park to secretly snap pics of necking strangers. Bribing the family chauffeur with photos of the man's gay son, Alexander eventually follows his own mother on one of her daytime trysts with her secret lover. Alexander shares the steamy photos that developed from that trip discreetly, slipping them into Mom's Marie Claire magazine while she's not looking. Passive-aggressive, no?

Cry of the Heart's campy dramatics reach a delirious peak when Alexander stalks a pretty blonde (Delphine Seyrig) in a grocery store, continuing to obtrusively snap photos despite the woman's plain discomfort. This digression comes back to bite him later on, when the blonde turns up at the family homestead as a dinner guest with her husband, an important business client of Alexander's father. The casual / awkward scenes that follow are typical of the film's herky-jerky, episodic nature. It's a sloppily directed and ultimately uninteresting film. Eric Damian's Alexander elicits zero sympathy, even before the accident. Mostly speaking in a dry monotone, Damian occasionally goes into unashamed scenery chewing whenever his character has an emotional crying jag. Not helping matters is the fact that the kid looks unerringly like '70s teen idol Jimmy MacNichol. As his mother, Stephane Audran appears to be sleepwalking through this undemanding role (despite her being prominently featured on the DVD packaging, it's really Damian's film with Audran in support). It's surprising, since she did a good job in Luis Buñuel's The Discreet Charm of the Bourgeoisie two years prior to this film's release.

What little interest Cry of the Heart has today lies in its depiction of the handicapped kid as an outcast and freak. For those who are used to the recent rash of "differently abled" movie and TV characters who are seen as confident role models and even chick magnets (like Artie on Glee), this film is an odd throwback, for sure. 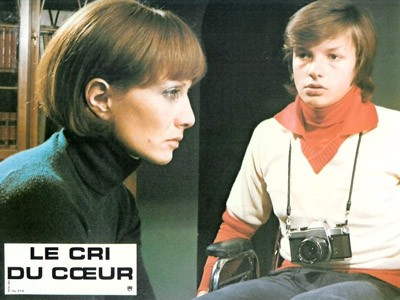 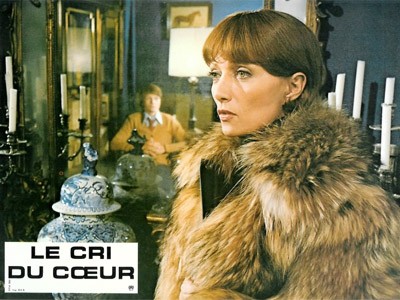 Pathfinder Pictures' DVD of Cry of the Heart showcases the film in 16x9 anamorphic widescreen, but the picture is blotchy and seems to have been the victim of overly compressed mastering. Picture quality is all right with some graininess and artifacts, easy to spot with a film that trends toward the darker, more muddy color palette typical of that era.

The film's French language soundtrack is presented in an unexceptional mono mix with optional subtitles which often flash onscreen for a millisecond. Plus, they have occasional typos. It's good enough, but could have been better.

Theatrical trailers for a handful of other Pathfinder DVDs, a few of which are presented in French with no subtitles, make up the sole bonus content on this disc.

A minor entry in the "kiddies gone psycho" mini-trend that followed the success of The Exorcist in the '70s, Cry of the Heart is the histrionic story of a boy whose controlling personality and sexual obsessions tear his family apart. Fine for a campy distraction, sure, but the film is too melodramatic, episodic, and sloppily made to make a strong impact. Skip It. 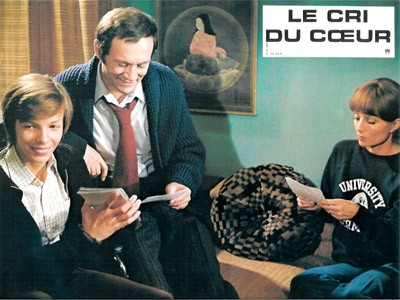 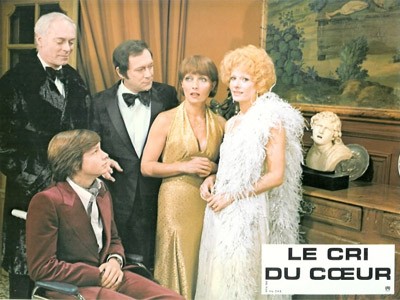