Where The Dead Go To Die

Unearthed Films // Unrated // February 21, 2012
List Price: $14.95 [Buy now and save at Amazon]
Review by Kurt Dahlke | posted March 16, 2012 | E-mail the Author
Where The Dead Go To Die:
"Wellllll doggies!" As Uncle Jed used to say. I'm pretty much speechless after watching Where The Dead Go To Die. I'm comfortable in saying it's beside the point to assess this movie in terms of others of its type. I don't think there's any good or bad, just levels of effectiveness. This is animation of transgression, which effectively sends you into a mesmerizing vision of hell. As an almost thoroughly jaded fan of extreme cinema, I can tell you this one threw me for a loop. Whenever you're in the mood for something extremely disturbing, far beyond what you think you can handle, well ... 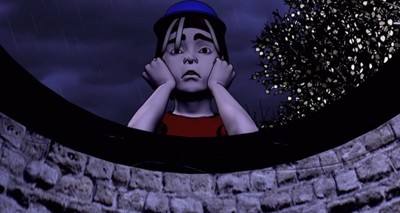 It's best not to know too much when going into this movie. At least it worked for me, since this was the reviewer's equivalent of a blind buy. I knew it was weird from the vague description, and soon got an even better idea that something was up when the disc immediately started in with deleted scenes including director's commentary. After about three minutes of mild-to-hairy creepiness, a menu screen appears. Dive in. With the aid of a description on the box, you can suss out the story as it skips around between the lives of some kids and a junkie transient within a few blocks radius of each other. All of them are messed up in some serious shit. Hallucinations abound. Eventually your soul runs screaming from your body, and it's up to your lizard-brain to figure out how to turn off the TV.

Aggressively nightmarish collage animation finds a young boy staring wistfully at the rain as his abusive parents argue. Things get so bad inside, the boy goes out for a walk, where he encounters his friend Labby, a red-eyed dog who whispers that the boy must kill his parents. And, things get even worse, so much so that at the eight-minute mark it's clear this movie could never have been made as a live action feature. Pretty soon, I'm wondering if it's legal for me to watch this movie in Oregon. By the 15-minute mark, I'm getting 'the fear'. I wonder if I can go on? 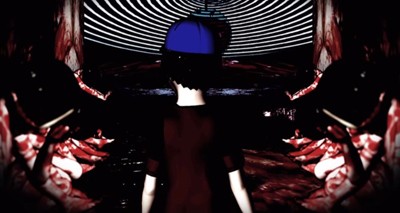 Thankfully, I guess, the crudely animated nature of Where The Dead Go To Die buffers viewers from the trauma, as do the sometimes corny voices and line readings from voice talent that includes Ruby LaRocca, Joey Smack, and Passenger Of Shit. But, inasmuch as this is an experience rather than a movie, I'll say that even with its hallucinatory narrative this reads as three short movies strung together. (Each chapter is helpfully titled, so it's not like director Jimmy Screamerclauz was trying to hide anything.) For what it's worth, it feels like with a little more effort, Screamerclauz could have rendered this into a authentic-feeling feature.

Screamerclauz packs this thing with sick, psychosexual atrocities and graphic violence. The final chapter, dealing with a child-porn tape-trading ring, is as heartbreaking as it is nightmarish. An air of diseased insanity pervades, and Satan is in attendance. Screamerclauz's computer collage animation combines simplistic character animations with disturbing photo-imagery and the occasional terrifying shifting face to create something profoundly disturbing yet so internally assured you have to admire it. With repeated hypnotic motifs breaking up the cozy horror - images of people spiraling as they fall into swirling pits of eyes and faces, for instance - the movie literally sucks you in, rendering you more vulnerable to the slime on the screen. Looking for the next thing in artistic affront? Where The Dead Go To Die will eat your mind. 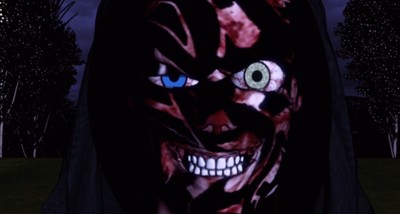 Video:
1.85:1 widescreen terror looks fine for a DVD, while faithfully representing what is in some ways crude computer animation. In other words, details are often deliberately pixilated, and all looks quite digital and a little harsh, which is probably good. This isn't a release for those who want to enjoy high-end CGI visuals, for sure.

Sound:
Dolby Digital 5.1 Surround Sound and Dolby Digital 2.0 in English are your available audio options. An active mix with an awesome musical score sports a good dynamic range, while the hideous whisperings of demonic characters gets right into your ears.

Extras:
This disc is packed with extras, including a Director's Commentary Track that humanizes the film with Screamerclauz's forthcoming nature about his project. There is a 3-minute Deleted Footage Montage with commentary that, I swear, started playing automatically when I put the disc in my player. Recording Liquid Memories is a weird 18-minute video interview (I think) with Linnea Quigley, who also provides voice talent to the movie. Kinect Motion Capture Madness is a fun four-minute guerilla how-to demo filmed in Screamerclauz's basement. You also get Trailers and a disturbing 18-minute Ice Cream Sunday Short Film which also comes with a Commentary Track, and a creepy four-minute TNI Tour Promo Cartoon, plus the Dogshit 5 Minute Promo Reel. Pleasant dreams!

Final Thoughts:
What more can I say? This extras-packed 90-minute nightmare of hallucinatory animation and psychosexual horror is ultra-violent, patently offensive, and proud of it! Whether or not you're into this sort of thing, it works perfectly, even if it's evil as all get-out. Where The Dead Go To Die is beyond dark, only saving your mind from total destruction by dint of the fact that it's animated. The movie is a diseased masterpiece, and it's Highly Recommended.