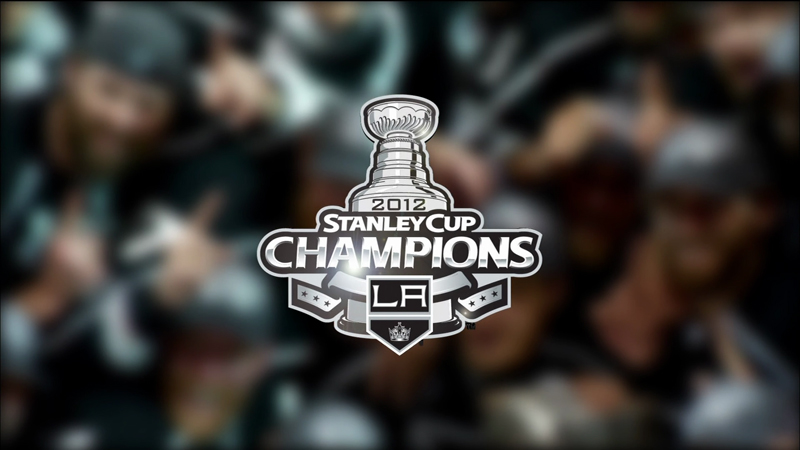 
The Movie
The scene: Long Island, New York, 1993. A teen watches as his heroes suffer a disappointing loss in the NHL Eastern Conference finals, after they had downed the defending champions, without the service of their star forward, who had been savagely injured in the previous series. The loss stung all the more when the Montreal Canadiens easily defeated the Los Angeles Kings 4-1 to win the Stanley Cup, and that young man knew that, if not for the criminal actions of Dale Hunter, it could have been his Islanders lifting the Cup.

That was the last time the Kings, led by Wayne Gretzky, would make an appearance in the Stanley Cup Finals, until 2012, when a wholly different team, with something of the same look, earned Los Angeles its first NHL championship on the back of a quartet of dominating forwards and an emerging goaltender, all-but humiliating their opponents on the way to the title. As is custom for hockey (and pretty much all major sports), the champions are feted after the season with a wrap-up film telling the story. But rarely is that story as cinematic as the Kings' 2012 journey from also-ran to leader of the pack. 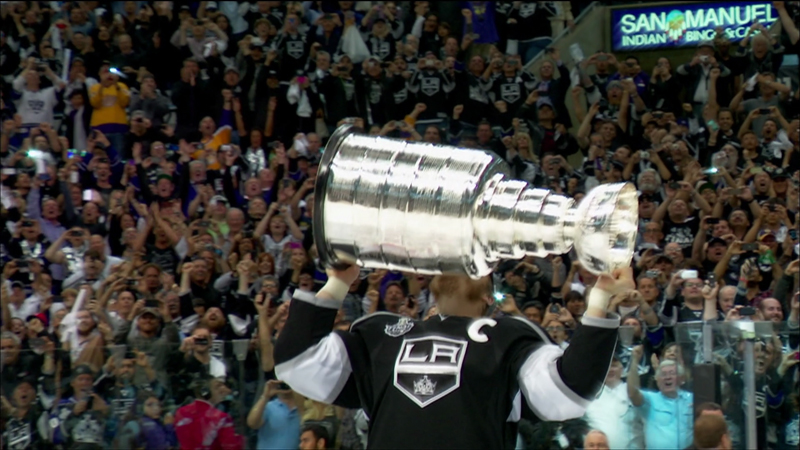 Part of it is the story of forwards Jeff Carter and Mike Richards, two once and future teammates, who once were thought to be Philadelphia Flyers for life, after signing with the team for a combined 23 years. But they were shipped out of the City of Brotherly Love in short order, one to Los Angeles, the other to Columbus. However, with both of their new teams struggling, a trade found them playing together once again as Kings. Joining a pair of career-long Kings in dynamic Anze Kopitar and Dustin Brown and a quick-rising offensive D-man in Drew Doughty, the pair helped solidify a dangerous attack that turned around the season with help from Jonathan Quick, a goaltender who flirted with perfection.

The other key element of the tale is behind the bench, as the Kings made an early move to correct a floundering season, dumping coach Terry Murray and replacing him with Darryl Sutter. Sutter's a unique character, and his team went on a second-half tear, leading to an outstanding play-off run, including 10 straight road wins. That they easily handled the first, second and third seeds on their way to the Cup finals fed the legend, but the fact that they blew two sweeps before heading into a potential sweep in New Jersey only heightened the drama. Losing games four and five put the Kings at risk of a monumental collapse, but yet another deus ex machina kept the plot on track, as a five-minute major penalty on New Jersey's Steve Bernier left the door to Cup immortality open, and the Kings kicked it in, tagging Marty Brodeur for three straight powerplay goals on the way to a six-goal Cup-clinching win.

This re-telling isn't the most artistic or original, sticking to plenty of talking-head interviews and highlights from the games, but it does a nice job of setting the stage by reviewing the Kings' Cup-less history and first-half struggles, before getting into the game-by-game deal. Getting journalists and analysts who covered the team at the time provides even more valuable insight, but unfortunately, and understandably, opponents are not heard from. On the other hand, the Kings players have enough personality to carry the day, and their story flows smoothly. 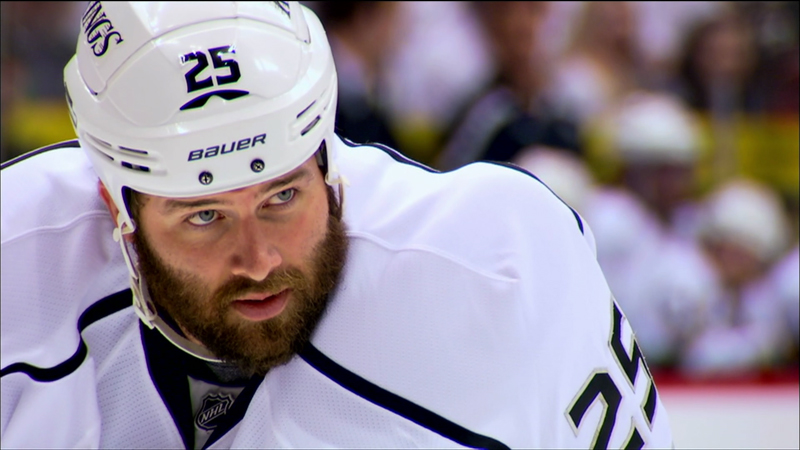 The Disc
The 2012 Stanley Cup documentary arrives on a single Blu-Ray disc, along with a DVD copy, which are packed in a standard-width dual-hub Blu-Ray keepcase. The disc has an animated menu (supported by a super-aggressive soundtrack) with options to watch the film, select scenes and check out the extras. Audio options include English DTS-HD Master Audio 5.1 and Spanish DTS Surround 5.1 tracks, while subtitles are available in English SDH, Spanish and French.

The Quality
The 1080p AVC-encoded transfer looks nice for the most part, but the variety of source materials used in putting the documentary together results in an uneven level of quality, with the interviews conducted for the film and (what seems like) NBC's game coverage looking the sharpest and most impressive, while other game footage is a bit lacking in fine detail (naturally the archival footage looks its age, but even so it looks pretty nice.) The interviews were lit/treated in a bleach-bypass-like style that reduced color, making them follow the Kings' uniform colors, but the rest of the clips are as colorful as you'd expect from well-lit NHL games. There are no noticeable issues with digital distractions, and black levels are consistently solid and deep.

The DTS-HD Master Audio 5.1 soundtrack isn't the most dynamic of presentations, delivering the voices and in-game audio clearly in the center channel, while pumping up the score in the surround speakers. The result makes things a bit flat, as you'd expect more aural excitement from the games, in contrast to the interviews. Everything sounds good, but it's a pretty simple construction.

The Extras
After watching many NHL DVD releases, expectations tend to be low when it comes to bonus features, though the Stanley Cup champions titles do normally include some additional footage found around the editing room. In the move to Blu-Ray, however, they made an effort to load up the disc with additional content that points to a smart production effort.

Half of the extras are included on both the DVD and Blu-Ray releases, starting with six "Because It's the Cup" commercials for the 2012 Stanley Cup playoffs (totalling 3:34.) Every year, the NHL manages to wrench every drop of sentimentality and pathos from their post-season history for these ads, and with some minor exceptions, these continue the trend, especially the "It turns men into boys" ad. It's no "There are no words" but it will do. There is one national spot that I never saw (and I watch a lot of hockey) and two Kings specific ads as well, so for most it's not just an archive of old stuff.

Almost 32 minutes of interviews from NHL Network, done before the Western Conference finals by Pittsburgh Penguins broadcaster Steve Mears (and in one case TV analyst Darren Pang,) gives you the chance to hear more from the main players, including dual sit-downs with defensive partners Scuderi and Doughty and fate-linked forwards Richards and Carter, and individual chats with Richards, Carter, Doughty, Quick, Kopitar and Kings broadcaster Bob Miller, who adds historical perspective. As these took place halfway through the playoffs, they aren't as open as the post-Cup conversations, but they do capture a moment in time for the team.

"Behind the Scenes with the Stanley Cup" is shorter than hoped for at 2:15, and shorter than previous versions of this annual entry, which shows "Keeper of the Cup" Phil Pritchard polishing the cup in his hotel room before heading over to the Staples Center in preparation for its potential presentation. Seeing what he was up to during games four and five, when a clinching win was also possible, would have been interesting.

More from the NHL Network comes in the form of the Top 10 Kings Highlights from the season (3:58.) There are some nice plays in this package, but the moves seen during the Cup finals seem a bit more impressive.

In the final DVD extra, you get 3:03 of extended locker room celebration footage, which is mainly the guys drinking from the Cup. It's probably just as quirk of hockey players' personalities, but for a championship celebration, it's a bit low-key. Perhaps it's just because they get to enjoy the celebratory skate-arounds on the ice after the game.

For Blu-Ray owners, the extras continue with the 9:43 "In-Game Wireless Features," which lets you hear from mic'd-up players, not just the Kings, during the 2012 playoffs. If you expect to hear some great insight or incredible profanity, you'll be disappointed, but it does get you closer to the game, which is pretty cool on its own.

If the locker room celebration wasn't enough, there's extended footage from the parade celebrating the Cup championship and the rally inside the Staples Center. As is the nature of such events, it's really most appealing to the team's fans, but hey, it completes the story.

Over 10 minutes of extended interviews dig deeper into the Kings' story, as some of the coaching staff talk about their experiences, Barry Melrose and Luc Robitaille discuss the 1993 Cup finals, and some journalists share their stories, while Matthew Perry and Pat Sajak talk about the celebrity angle to hockey in Hollywood. There are some great stories here, including one about the Kings and Oilers sharing a flight during a play-off series, but they lack some context, a problem that could be solved by a few simple on-screen titles.

One of the most welcome entries in the extras is the complete five-minute Los Angeles powerplay that changed Game Six of the finals. Considering the limited gameplay seen in the documentary, getting to see this segment, which essentially clinched the Cup for the Kings, in its entirety, is great for archival purposes. The only thing that could make it better would have been starting with Bernier's penalty, for the sake of completion.

But wait, there's more. The post-series press conference with Quick and Sutter (4:15) is here, known best for Quick's daughter marching around with a flag before choking on some M&Ms, followed by in-the-moment on-ice interviews with several members of the Kings just after the big win (4:15.) The extras wrap with a 2:03 package from Fox Sports on the "Pancake Incident," showing Penner's attempt to put a cap on his pancake-induced injury, for the benefit of charity. All in all, an impressive spread of bonus content. 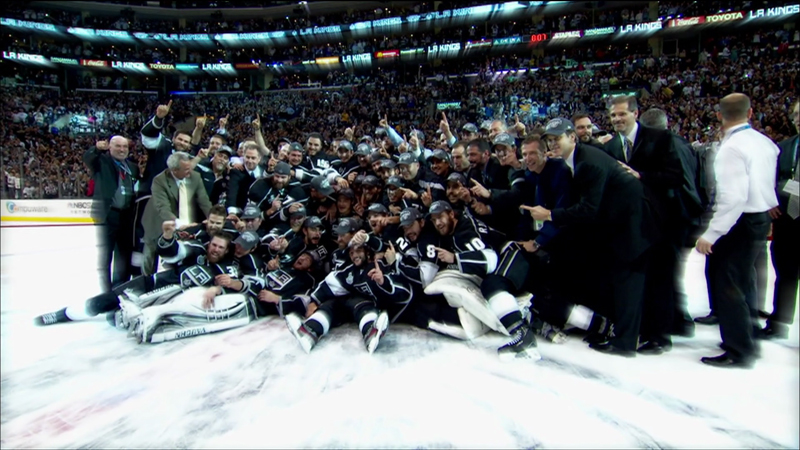 The Bottom Line
The Kings' season was the kind of story made for the movies, from the journeys of Richards and Carter, to Quick's emergence, to the coaching change and the incredible run through the playoffs. Having a cast of charismatic players leading the way didn't hurt either. The Blu-Ray boasts solid (but not great) audio and video quality, and piles on the extras to make for a rather in-depth remembrance of the Kings' first-ever championship.