Fan Favorites: The Best of Frasier

Note: All eleven seasons of Frasier have been available on home video for several years. Various members of the DVD Talk community have posted individual season reviews of the show. If you'd like to read their thoughts, just do a basic review search on the site's search engine. 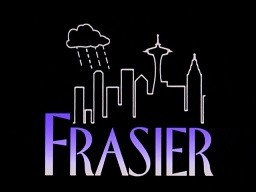 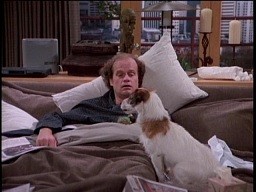 It was with enthusiasm that I approached this review of the recently released Fan Favorites edition of Frasier. Not only have I been a fan of the series since its inception (nearly 20 years ago), but I also participated in the Facebook poll that generated the resulting content on this disc. To be honest, I might quibble a bit with some of the episodes that ultimately made the cut - but I'm glad to see that the show is still popular enough to warrant further attention on home video. Now if only CBS Video and Paramount would consider a blu-ray release . . .

To provide some context for those unfamiliar with the show, Frasier was a spin-off of another popular NBC series, Cheers. Frasier ran for 11 years - add another 9 years for the character's role in Cheers and that's two continuous decades where star Kelsey Grammer portrayed the slightly pompous psychiatrist. Quite a run, wouldn't you say? In any case, Frasier follows the titular character as he moves from Boston to Seattle for a gig as a call-in radio host. He's reunited with his brother Niles (David Hyde Pierce), a psychiatrist himself, and their father Martin (John Mahoney), a retired cop. Frasier and Martin live in an "apartment of the gods" with Daphne (Jane Leeves), a physical therapist and home health care worker. Rounding out the cast is Frasier's radio show producer, the man-hungry Roz (Peri Gilpin).

To this day, I still think the first eight seasons of Frasier are pure sitcom gold. The program was well-acted, with David Hyde Pierce exceptionally amusing as the prissy, lovelorn Niles. Its writing (until a decline in the last few seasons) was uniformly clever. What I most admire about Frasier was its seamless ability to operate on several levels. Since Frasier and Niles are well-educated, they could reference literature, philosophy, music, and, of course, psychiatry for heady humor. However, the show was not above having episodes focused on sex-antics (The "Ski Lodge" episode on this disc is a great example) or romantic melodrama ("Moon Dance" serves as an illustration). And, when it suited the show, Martin's dog, Eddie, would scamper onto the set to perform an animal trick. No matter what type of humor Frasier dabbled in, it all seemed to work. 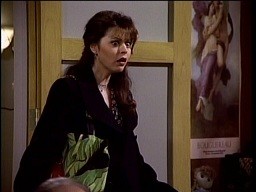 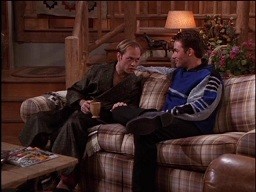 The top eight episodes from the aforementioned Facebook poll are collected on this single disc. They are "A Midwinter Night's Dream," "Frasier Crane's Day Off," "Daphne's Room," "Moon Dance," "The Two Mrs. Cranes," "Ham Radio," "Ski Lodge," and "Three Valentines." None of the eight episodes are from the last seasons of Frasier, which is not a real surprise - although Season 11 does have some gems. For my money, "Ham Radio" is arguably the best: a hysterical comedy of errors in which Frasier's over-directing of a live radio drama goes horribly awry. David Hyde Pierce is pitch perfect here as Niles becomes fed up and takes over the reins of the production. "Ski Lodge" is another classic; in this one, Frasier takes Niles, Martin, Daphne, and a swimsuit model on a ski vacation with a handsome instructor. Everyone's libido is fully charged, unfortunately their interests don't match up leading to hysterical awkwardness. "Three Valentines" sports a hysterical nonverbal performance from Pierce.

All eight episodes, truthfully, are good representative examples of Frasier; however, I would have chosen a number of episodes over "A Midwinter Night's Dream" or "Daphne's Room." "The Matchmaker," for instance, is a tour de force as Frasier tries to set up his station manager with Daphne, unaware of the man's true romantic feelings. Some of the guest appearances would have been nice: several of Grammer's alums from Cheers, for instance, made funny episodes. Other great star turns included Monk's Tony Shalhoub as an unlucky member of "The Focus Group" and Star Trek: The Next Generation's Patrick Stewart as a gay opera director who takes a shine toward Frasier in "The Doctor is Out." Perhaps if this collection does well enough, a Volume Two will be produced? Or better yet, let's get Frasier onto blu-ray!

All in all, as a primer on Frasier, this set comes highly recommended. Any true fan of the show, though, would want to go with the individual season sets that have been available for several years. 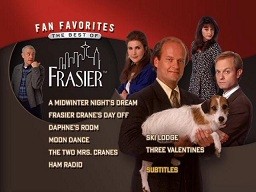 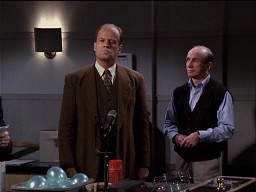 CBS Video and Paramount present these eight episodes of Frasier in a 4x3 aspect ratio that represented their original television broadcast. While I didn't try a disc - to - disc comparison, I'm fairly confident that these are the same transfers from the original season sets, so no upgrade on the episodes. Frasier, nonetheless, looks fairly solid for a television show of its time period.

The lone audio track on all eight episodes is standard Dolby Digital Stereo. That's not surprising, as that reflects their original television broadcast as well. Optional English subtitles are made available.

A few brief commercials for various vintage TV shows on DVD are here; otherwise, no extras reside on this disc.

I might quibble with the final results of these "Fan Favorites" from a recent Facebook poll I participated in; however, there's no denying that the eight episodes on this disc are fairly representative of one of the great sitcoms from the last twenty years. I'd highly recommend this disc for the episodes "Ham Radio" and "Ski Lodge" alone. Fans of the show can stick with their season sets on DVD, however, as no new or improved content is made available here.