Fortunately, following complaints from viewers, PBS wisely began releasing the "original UK editions" (as the packaging notes) of Lewis beginning with series three. These bear the original Lewis title and each episode runs 92 minutes. They've also gotten rid of the public broadcasting corporate sponsor ads preceding and following the shows (as broadcast on PBS), which for a time they had extended to their DVDs and Bu-rays.

The four mysteries here rise on fall on their scripts. I thought the second and fourth ones were way above average, the first episode pretty good, while the third was prolix and put me to sleep. The fourth episode particularly has some exceptionally sharp dialogue and obvious intelligence (so much so that at times it unnecessarily calls attention to itself) but overall I found Series Five slightly disappointing, mainly in that its title character gets lost in the generic British mystery series writing. 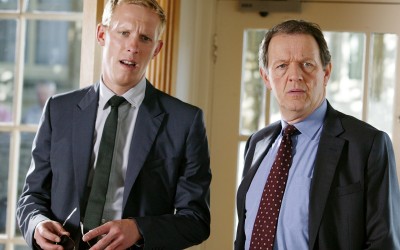 As before, the program follows the murder investigations of Chief Inspector Robbie Lewis (Kevin Whately), an ordinary, Newcastle upon Tyne-born, Geordie-accented widower pushing 60. Living and working in the world of academia, Lewis is unassuming, though barely tolerant of pretentious types, of which there are more than a few in Oxford.

In the original series, Inspector Morse*, Lewis was a Detective Sergeant studying under that show's title character, played by the irreplaceable John Thaw. Thaw's Morse was a cranky, erudite, and anti-social classical music lover, nearly the antithesis of Whately's gentle policeman.

In Lewis the student becomes the teacher and, in a sense, the teacher also becomes the student. Lewis is partnered with Detective Sergeant James Hathaway (Laurence Fox), a Cambridge-educated former theology student who had once studied for the priesthood. In his early thirties, Hathaway superficially resembles a young Morse: enigmatic, intellectual, with a similarly acerbic sense of humor. He's not, thankfully, a clone, but it's a clever set-up nonetheless, almost but not quite a complete reversal of the original series' character's relationships.

The four programs - "The Soul of Genius," "Generation of Vipers," "Fearful Symmetry," and "The Indelible Stain" - unfortunately only moderately exploit this relationship. Instead, the four scripts basically follow the wearying formula of British mysteries these days. Each introduces a timely or novel concept into its well-worn, red herring-stuffed plots: the riddle of Lewis Carroll's "The Hunting of the Snark"; subversive media blogs and their personal destructiveness; monkey labs, wife-swapping, and fetishists; the genome and racial profiling. These are then grafted onto an unfortunately predictable template almost always involving adulterous professors and their ambitious, pretentious, shrewish or control-freak spouses; amoral and immoral students in over their heads; self-consciously and extravagantly eccentric scholars; long-suffering anonymous underlings with axes to grind, etc. Like American counterparts such as CSI and Law & Order: SVU, the shows are also so rigidly structured that, if you watch enough of them, it's very easy to weed out the red herrings and identify the killer(s) and their accomplices.

As with Sherlock Holmes, Hercule Poirot, and Lt. Columbo, the joy of such programs, however clever their mysteries might be, is the personality of the crime-solver. Whenever Inspector Morse is interviewing a suspect, as he observes the suspect the audience chiefly is observing Morse. His reactions to his observations are what are most important, like Sherlock Holmes's excitement in finding a clue overlooked by others, or Poirot's obvious relish being the center of attention at the dénouement.

Robbie Lewis is much the same, and Lewis works best when the focus is mainly on him, such as his bewilderment and outrage at the inhumanity of the editors at the Rupert Murdoch-like online tabloid, or in the gentle, fatherly way he advises Hathaway to hurry up and find a life partner before it's too late.

There's less of this kind of thing and more of the overly familiar standard mystery plotting, handsomely done though it is, and this disappoints. The previous series had Robbie struggling to decide whether to encourage pathologist Dr. Laura Hobson's (Clare Holman) obvious interest. By the end of that series they seemed to accept their mutual attraction but, somewhat unaccountably, are back to living separate lives in Series Five. Possibly the producers felt Robbie should remain alone like his former boss, but that this aspect of Lewis should be teased and abandoned seems shortsighted. The fifth series also drops all references to Morse, a shame since that manner in which its teleplays did so was uniquely intelligent.

Inspector Lewis - Series 5 looks great, despite being in 1080i format, with its four 92-minute episodes presented on two Region A encoded Blu-ray discs. The photography of these shows is outstanding throughout. Stylistically identical to the original Morse, shot in full-frame Super-16(mm), it's a real pleasure to see these same locations (and the nuances of the actors' performances) in high-definition. The audio 5.1 Surround, is also excellent, and supported by optional SDH English subtitles. There are no Extra Features.

Myriad complaints aside, Lewis is still way above average by British mystery series standards. I only wish its teleplays would focus more on its strengths than the perceived demands of foreign audiences, which might be an unhelpful influence. Still, Recommended.

*Oddly, its title is a misnomer as well. Those shows always opened with "John Thaw as Chief Inspector Morse" and then the title of the specific episode. The onscreen title was never "Inspector Morse" per se.