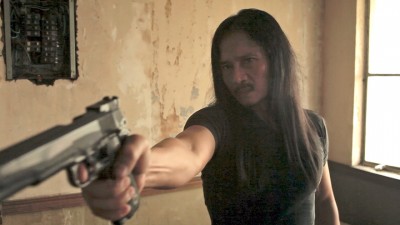 Ron Morales's Graceland is centered on an idea so astonishingly clever, it almost presents a challenge; he risks not living up to the promise of his premise. Here it is: Marlon (Arnold Reyes) is the driver and general clean-up man for a wealthy, corrupt congressman (Menggie Cobarrubias). One afternoon, as he's driving the two girls home, he is carjacked by kidnappers who hope to collect a healthy ransom by taking the congressman's daughter. To show they mean business, they kill Marlon's daughter, right in front of him. Trouble is, they've mix the girls up; they kill the valuable one. When they realize their mistake, Marlon's instructions are clear: to keep his own daughter alive, he must keep what he knows about the rich man's daughter to himself, and help deliver the ransom.

Thus, he must perpetrate a lie in order to save his own girl from meeting the same fate--and he must elude the police, who suspect him of the crime. Neat. Morales, who also wrote the script, assembles the moving parts with cleanness and power, particularly the kidnapping sequence, which is set up to look like just another step in a series of progressively irritating inconveniences, before blind-siding the audience with the mix-up and its consequence, which left this viewer reeling.

In that scene, and throughout the picture, Morales's storytelling sense is blunt, brusque, and unpredictable. This is gripping, taut filmmaking; the events unfold with cold logic and punchy precision. The look is grimily stylish, smeared with grain and neon (the cinematographer is Sung Rae Cho). And he's good with his actors--particularly Reyes, who is admirably adept and open in the kind of desperate man/desperate situation role that Stewart or Grant would do for Hitchcock. But it's also not a simple, one-note character; Morales writes him an intriguing arc and leaves some open, contemplative questions about his loyalty to his employer--and the degree to which he should be held responsible for that loyalty.

Graceland isn't all genre fun and games--a subplot concerning the depths of the rich man's depravity comes to a head, unexpectedly enough, during the tense climax, which quickly downshifts from chase suspense to skin-crawling disgust. The picture frankly comes apart a bit after that; the story's lead cop (Dido De La Paz, very good) is saddled with a bit of clumsy third-act exposition, and the little flashback sequence at the end is insultingly unnecessary, an indication that the filmmaker doesn't trust this audience to the degree previously assumed. But there's still much to recommend in Graceland, a film that (like 2006's Tell No One) serves to remind American filmmakers that they'd better keep their thriller chops in shape, because they've no longer got a monopoly on that particular market.