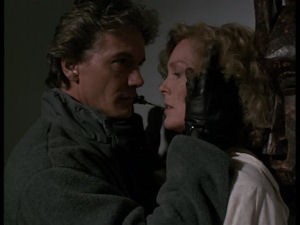 The Movie
Every time I hear someone whine that "the book was so much better than the movie!" I want to slap them. Is it really fair to compare such different artistic mediums? Don't you have to accept that screenplays can't realistically accommodate every aspect of an entire novel, and that they should be judged separately on their own terms? It probably doesn't help that I don't actually read books (really, who has time?), but back in the day when I did, Dean Koontz novels were a frequent source of enjoyment. And while I never actually read his 1980 hit Whispers, after watching this 1990 adaptation I can undoubtedly say that...sigh...the book was without question infinitely better than the movie.

I'm not sure if this film was ever intended for theaters, but based on common sense (i.e., the overall quality on display), the full-frame presentation and my minimal research, it seems that this was a direct-to-video or cable entry (Katarina confirms that this only played in Canadian theaters and was direct to video in the States...thanks, random wrestler lady!). The film slogs along at an almost agonizing pace before picking up in the last half hour or so, when it becomes clear that the source material had some pretty cool stuff to work with (and I envisioned how awesome a film this could have been if put in more capable hands). 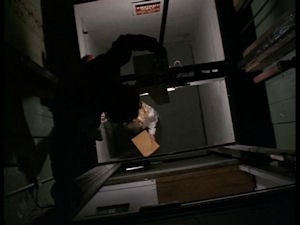 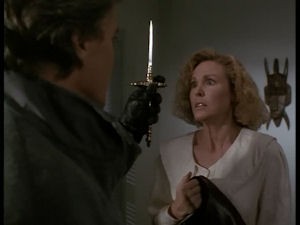 Victoria Tennant plays Hilary Thomas, a novelist living alone in the big city--the only way to her apartment through a giant elevator that screams "Setpiece!" (Sadly, this obvious telegraphing is a recurring theme.) Director Douglas Jackson wastes no time thrusting her into danger as Hilary is attacked in her home by Bruno Clavel (Jean LeClerc, best known for his soap opera work), a wealthy pillar of the community who oddly calls her "Catherine". Hilary fights back, but Bruno comes back again (a promise he makes with his worst Arnold impression), and Hilary fights back again...and all of it comes across as amateur hour at your local community theater.

And that's my biggest gripe with Whispers: The critical standoffs between the two--the pivotal scenes that set the tone and pace for the whole film--are so clumsy and comical, I started to wonder if I was missing the joke. The two sort of just stare at each other, waiting for something to happen ("I don't know what you're playing at but I want you out of my house!")--the shots connected so terribly that I turned to the invisible friends sitting next to me on my couch, jaw dropping as I frequently asked, "Are you seeing this?!" 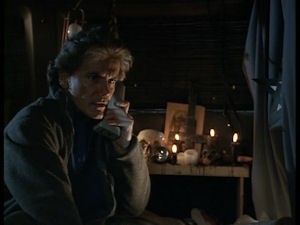 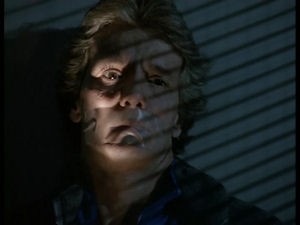 It's almost like a sketch that's making fun of bad horror films. The acting, the choreography, the camerawork...there isn't an ounce of terror, and the duo's lame-o exchanges go like this:

The dialogue is so careful, you may think the script is trying to hide a twist that comes later. Alas, in the end, it just ends up being bad dialogue. None of it makes any sense (hey, Hilary...how 'bout a sense of urgency here, hmm? Look alive!), which led me to believe there was something supernatural in store--especially given all that vampire stuff in Bruno's van. Plus, after the third attack and apparent death of our villain, things are far from over. 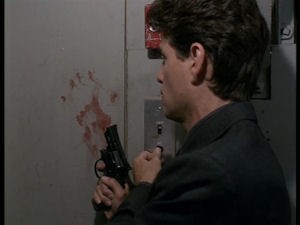 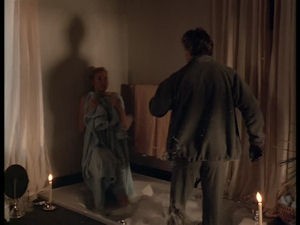 The actors don't do the film any favors--the monotone Tennant is dreadful throughout, incapable of showing anything resembling true surprise or fear. She's one note in both expression and delivery, and Hilary just comes across like she just can't be bothered with meaningless things like fighting for her life: "Listen, whoever you are..." she says during an apparent prank phone call, "if you want to talk dirty just let's hear what you've got to say cause I haven't got all night!" (Oh Hilary, you're sooooo droll!). 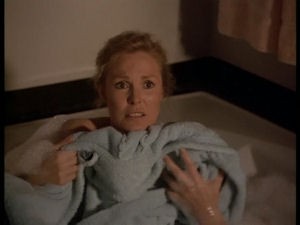 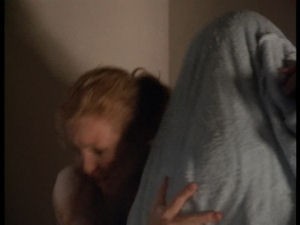 The second attack is highlighted by a long, silent stalk sequence that will have you battling your yawns to stay awake, the film making the awful of decision of staying with Bruno's point of view--lessening the zero suspense it had even more--as a miraculously clueless Hilary readies for bed. It doesn't help that LeClerc is about as menacing as, well, a soap opera actor (his Achilles' heel? A towel over the head!). I'm guessing the film is called Whispers because he--get this!--whispers his lines (like "You can't kill me!") in what has to be a concentrated effort to hide his accent and overall bad acting skills. When you combine Tennant's disinterest with LeClerc's whispers, it becomes almost unbearable: 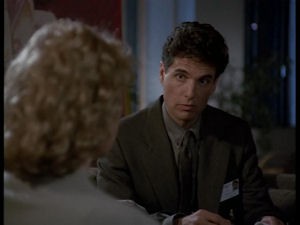 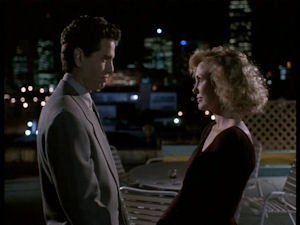 Thank heaven Hilary enlists the help of Sergeant Tony (Chris Sarandon, doing his best to lend some credibility to the project), who quickly falls for his damsel in distress--leading to a tepid romance (their sex montage is hysterical...awkward pity sex, anyone?) that further distracts us from the few morsels of interest here. (Sadly, he's not a great cop either...hey, Tony? I wouldn't tell a prank caller that you've put a tap on the line, umkay?) Thankfully, the second half of the film shifts away from Hilary and focuses on the Bruno mystery, leading us to the Salem's Lot-esque Clavel Orchards (nothing says spooky like apples!) and some skeletons in the family closet. Don't fear--all will be answered, and boy does it get silly (with some SHOCKING REVELATIONS!), but that's a lot more entertaining than the "slow and stupid" that the film opts for in its opening hour.

Along for the ride are a handful of scene-stealing (and scenery chewing) supporting players that will at least make you laugh. Peter MacNeill (whose Canadian accent creeps though the most) plays Frank, Tony's abrasive, tough-talking partner who speaks his mind and calls women things like "broads", "bitches" and "bimbos". Some of his time is sadly occupied by a pointless side story clearly inserted to up the violence in the first half, but at least he gets the best line while visiting the morgue, where he happens across a corpse in the hallway and has this exchange with an insensitive, banana-eating coroner patterned after Friday the 13th: The Final Chapter's Axel: 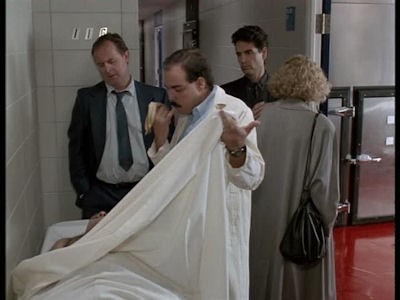 "Oops! Sorry, Rock Hard! Pet name we have for him. Rigor does some strange things..."
"Sure does...If he's donating his organs to science, put me down for a dick transplant!"
"Ha ha...you've have to get in a long line for that one, Lieutenant!"

(I'd tell you about another memorable Lieutenant line, but I don't want to spoil anything...you'll know it when you hear it.) There's also a creepy mortician named Avril (Keith Knight), who likes to engage in, ahem, extracurricular activity on his slabs ("Here coooooomes the hearrrrrse!"); a creepy bookseller (Chris Britton) slash Satanist ("I believe in the dark lord. His time is coming very soon. Christ worshipers will be slaughtered, babies will be sacrificed on the alters of churches and temples to the dark prince, and fire will consume the good and the weak...I look forward to it!"); and my personal favorite, the creepy, gravelly voiced Mrs. Yancey (Jackie Burroughs), a former madam keen on Hilary: "Too bad I'm not still in the business, dearie...I coulda made you into a top money girl! You got that snooty attitude men love to take down a notch or two..." 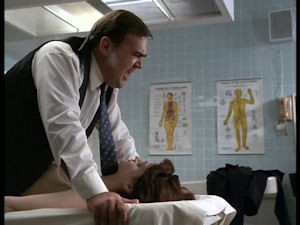 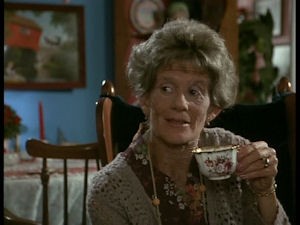 But in a film that aims to create some spooks, it probably isn't a good thing that the most memorable elements are these chuckles. Also bringing down the fright is the overall cheap look--a few exteriors are filmed on what I can only assume is the same nondescript street with the same nondescript extras walking by (someone shoot the location manager, stat!), and I can't tell if Hilary's apartment is supposed to be unfinished or if the filmmakers just didn't care if the camera veered too high). 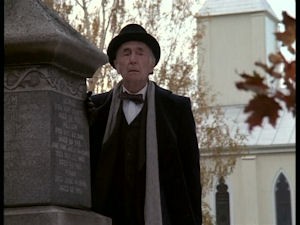 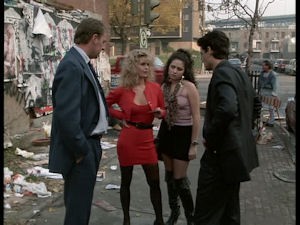 There's also a weak daylight stalking of Hilary's agent Kayla (Linda Sorensen), one of many sequences that eschew darkness (a simple fix that would have added at least a little atmosphere); some quintessential '80s hooker bit players (just aching for that big break!); and Fred Mollin's score has that dated, late '80s vibe that lacks any distinction. If it weren't for the nasty ending, Tennant running naked down a flight of stairs (not a flattering shot for anyone) and lines like "Get up or I'll blow your goddamn balls off!", you'd swear this was filmed for network television. 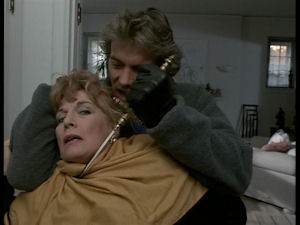 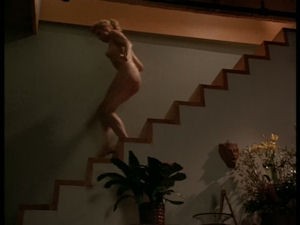 But despite my ever-growing ennui with every fiber of this film's being, I found myself satiated enough with its closing act. Make no mistake, it's still outlandish, ridiculous and amateur, but at least it shows some signs of life--including a romantic bedroom encounter that I didn't see coming (and a sequence that reminded me of Friday the 13th Part 2, with Psycho being another influence). That almost makes me forgive Tennant and Hilary, who once again will have you banging your head as she aimlessly wanders around in the finale when common sense screams that she should be making herself useful. (Apparently those damn whispers aren't doing the trick...) 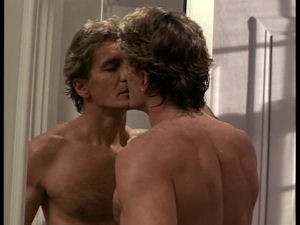 Video:
While IMDB lists the original aspect ratio at 1.78:1, I'm not sure I believe it. If Whispers was originally shown that way, it's clear that this was shot with a full-frame composition in mind. That is how it's presented here, and I never felt like any information was lost. It actually looks pretty good in many shots, with some surprisingly nice detail. Other shots aren't as solid, and I wouldn't say that lighting is the film's strength...but that isn't any fault of the transfer. The outdoor shots aren't as impressive (you may notice some black crush), but overall it's a decent outing.

Audio:
The English mono track is decent, but certainly won't knock your socks off. Outside of Jean LeClerc's acting and accent, I understood most of what was being said. 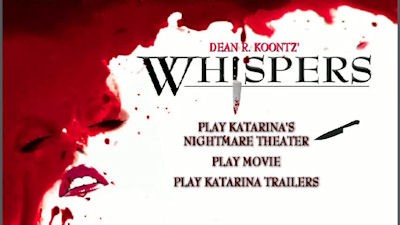 Extras:
One of the titles in Scorpion's "Katarina's Nightmare Theater", the disc has a brief intro (4:50) from "former WWE diva and current TNA knockout" Katarina Leigh Waters. Still not sure I quite understand the connection, but there you have it. It's not a complete waste of time; while the musings on the plots and cast aren't scintillating (although I did forget that Keith Knight was in My Bloody Valentine), Waters acknowledges that the film fizzles after apparently running out of money (preventing it from some grand ending). Trailers are also available. 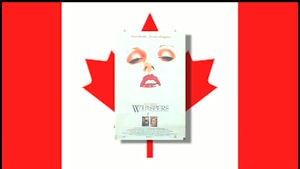 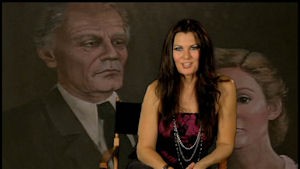 Final Thoughts:
If you can get past the agonizingly boring first hour, the laughable standoffs that get the ball rolling and the inability of Victoria Tennant to convey anything close to resembling true fear or surprise, Whispers has enough silliness in its final frames to make up for it (just a little bit) and prevent it from being a complete waste of time. I know that's not a ringing endorsement, but that's all I got. In more capable hands, this could have been much better. Rent it. 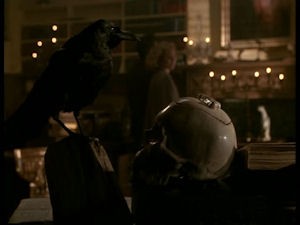