My review of Acorn Media's upcoming DVD release of M.R. James's Casting of the Runes will be slightly awkward in that I'll be breaking (a bit, anyway) the standard template of a DVD Talk review. I'm recommending the disc, but I'm doing so more in consideration of its bonus content than its actual feature. For you see, in addition to the 1979 ITV production of the celebrated British ghost writer's popular story titled Casting of the Runes, the DVD contains a 1995 television documentary titled A Pleasant Terror: The Life & Ghosts of M.R. James, itself several minutes longer than the "feature," and another television adaptation of an M.R. James tale: Mr. Humphreys and His Inheritance. Acorn could have highlighted all three programs and called this release The M.R. James Collection but clearly chose not to. In any case, the bonus content is compelling enough in its own right to warrant a discussion in this space, rather than buried at the end under the "Extras" section. 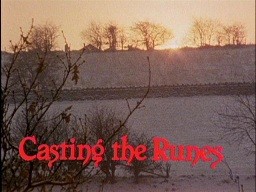 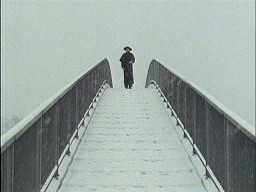 The main feature of this release is indeed Casting the Runes (47:27), a 1979 installment of the television series ITV Playhouse. While I've read some short fiction by M.R. James, I haven't read the source material for this production, so I can't comment upon the faithfulness of the adaptation. Still, I think I would have preferred something set during James's time, as this production sets the story in present-day 1979. Here, a television producer (Jan Francis) is surreptitiously handed a slip of paper with Runic characters by an author of a tome on witchcraft (Iain Cuthbertson) after she profiles him on a documentary. She discovers that she will soon die if she does not surreptitiously hand the slip of paper back to him. Writer and director Lawrence Gordon Clark does a fantastic job of filming moody English locales; one wishes that this had been widescreen to take fuller advantage of the countryside shots. The actors are fine - though the script itself lags, taking too long to set up the central conflict of the story. This was a breezy production - and the score and quirky effects will have some thinking this was a lost episode of Doctor Who circa the Tom Baker era. Casting the Runes was watchable albeit disposable entertainment. 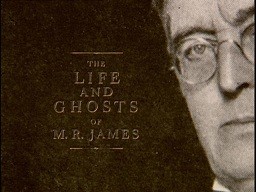 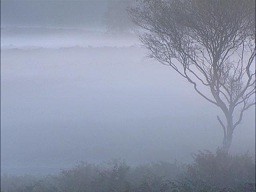 A Pleasant Terror: The Life & Ghosts of M.R. James (51:06) is a pleasant exploration of M.R. James and his fiction. Produced in 1995, this documentary weaves together several components. It has soundbyte-styled insights into James' work from a number of experts, including scholars, novelists like Ruth Rendell and Daniel Easterman, and even iconic horror actor Christopher Lee. It provides scenes from old BBC adaptations of James's ghost stories and also extract readings to give a flavor of the writer's prose. Host Bill Wallis tours the locales James lived in and wrote about, while actor Michael Elwyn enacts key moments of James' life. This last element gets a bit too melodramatic for my liking, but the production overall does a fairly solid job of giving its viewers a good sense of James's life and storytelling. A Pleasant Terror is the most interesting of the three programs on this disc. 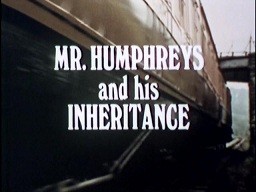 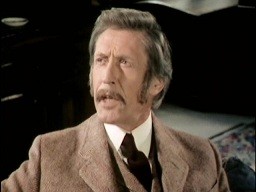 The most curious - and probably most rare - of the three productions is a 1976 short dramatizing the M.R. James story Mr. Humphreys and His Inheritance (20:07). It appears to have been an episode of an educational program called Music Scene. A composer first discusses his approach to scoring the short - and asks for discussion afterward about the score's success or limitations. The score does tend to dominate, but then, I guess that's the point. The short itself is entertaining enough: a Twilight Zone-esque story of a man who gets caught up in a maze on the estate he has just inherited. At 20 minutes, it doesn't overstay its welcome.

In sum, this disc offers two vintage (and decidedly British) episodic-length adaptations of M.R. James stories and a decent documentary on the man himself. Folks who are into the more literary and suggestive supernatural storytelling that James excelled in will find this collection intriguing. Recommended. 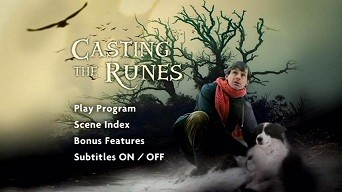 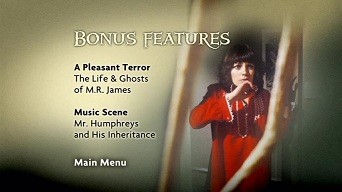 On the back DVD cover art, Acorn Media put the following disclaimer: "Due to the age of these programs and the improved resolution that DVD provides, you may notice occasional flaws in the image and audio on this DVD presentation that were beyond our ability to correct from the original materials." That's a fair statement - though to be honest, I didn't think these programs looked all that bad. All three are in a 4:3 full screen aspect ratio, representing faithfully their television roots. Mr. Humphreys and His Inheritance was noticeably soft. Dirt and grain are most apparent on Casting the Runes (which also, rather oddly, had a small white square periodically appear at the top right corner), while the documentary comes off the best (not surprising given that it is more contemporary).

All three productions have Dolby Digital mono tracks, likely representing their original television broadcasts. Dialogue is always center and clear, even during moments when the score intrudes. Casting the Runes has optional subtitles in English, and I was surprised to see the other two productions were also given the same, even though this isn't clearly indicated in the menu system.

I've already covered the content designated as "Bonus" material above. In addition, preceding the main menu are a commercial for Acorn Media and trailers for The Feathered Serpent and The Rivals of Sherlock Holmes.

No visceral horror on this disc; instead, Acorn Media's release of M.R. James's Casting of the Runes features two short vintage British television takes of James's stories (the other being Mr. Humphreys and His Inheritance) as well as a fairly insightful hour-length biographical documentary. Recommended for fans of "old-school" literary horror.