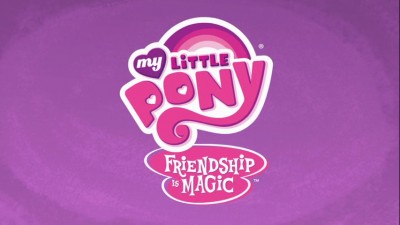 
The Story So Far...
Led by Lauren Faust (The Powerpuff Girls, Foster's Home for Imaginary Friends), Hasbro brought their old girl-toy tie-in cartoon back as a centerpiece of their HUB cable channel. Trying to make a better, more universal product than the original, Faust wound up creating a show that not only appeals to young girls, but to older males who have embraced the series and adopted the label of "bronies." The series has started production on a third season, and two short home-video collections have been released. DVDTalk has a review from a previous release.

The Show
My daughter definitely enjoys My Little Pony: Friendship is Magic, but it's not really a favorite of hers. However, when the royal wedding episodes were announced, she made sure that we were going to tape them. There's something about a royal wedding that gets girls excited, and when that royal wedding includes ponies, pegasi and unicorns, well there's no meter available to measure that kind of anticipation. So the series' two-part second-season finale was going to be the biggest event in MLP:FIM's short, but very popular history.

Word gets out about a royal wedding in Canterlot, home to the ponies' leader, Princess Celestia, and the core ponies, Twilight and her pals Applejack, Rarity, Pinkie Pie, Fluttershy and Rainbow Dash, learn they will be playing key roles in the nuptials. But Twilight learns something else, when she finds out she has a few close connections to the wedding, and those connections reveal problems no one else can or is willing to see. Most adults watching will know where the story is heading, but it's well-executed, and paced well across the two episodes, which makes it work for kids and older viewers. 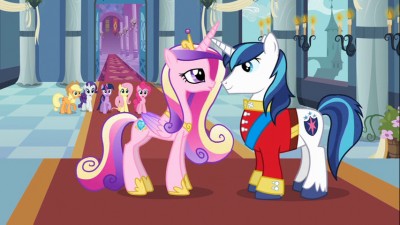 The show's strength is in the silliness it embraces, much of which comes from the whimsical art style and animation. Whenever Tara Strong's ebullient voice bursts out of Twilight, or a goofy bit of physical comedy splashes onto the screen, it's hard to not smile. Sure, most of plots are very female-friendly, involving weddings, galas, romance and fashion, but the cuteness of the show is hard to deny, and it's more often than not just fun, not simple kids entertainment.

The third episode included on this disc continues the theme of romance, as three younger ponies attempt to set up their teacher, Cherrily, on "Hearts and Hooves Day," the horse version of Valentine's. Their choice of suitor, the dull farm-boy Big Mack, is problematic, but their tactics are humorous, as are their effects, which are just ridiculous. The focus shifts back to the main group, specifically Rarity, in "Sweet & Elite," which puts the fashion-forward unicorn among the upper crust of Canterlot, only to have her down-home pals from Ponyville embarrass her, while "The Best Night Ever" covers a lot of the same ground, as the ponies are invited to a high-society bash, only to find themselves out of their element. Something about finding your place in society, partying and getting into a relationship apparently appeals to the fairer sex. Who'da thunk it? 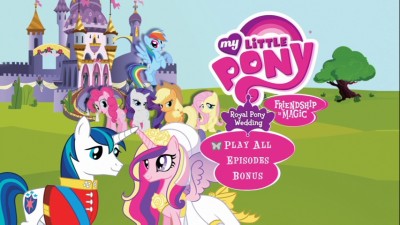 The DVD
Packaged in a white single-width keepcase, this DVD offers up five somewhat random episodes, four from the second season, and one from the first season, the season finale. The discs has a minorly animated anamorphic widescreen menu, with options to play all the episodes, select shows and check out the extras. There are no audio options and no subtitles, though closed captioning is included.

The Quality
Presented in anamorphic widescreen, these episodes look fantastic, delivering the show's beautiful animation without issue. The color is bright and rich, and there are no issues with compression artifacts. Occasionally some pixelation along edges can be seen, but for the most part, everything looks great.

The audio is delivered via Dolby Digital 2.0 tracks that are don't do a whole lot to tax your system, but the sound is clean and strong, especially when it comes to the songs, with your usual balanced sound.

The Extras
The extras are pretty limited, with a few singalongs and a pair of coloring pages. The two singalongs are "Love is in Bloom" (1:48) and "Valentine's Day Song" (1:32), which are presented with karaoke-style on-screen lyrics, for little ones who like to belt out a tune. The coloring pages, which includes a matching game and a maze offered as PDFs on the disc, are actually tied to the wedding episodes, in a nice touch. 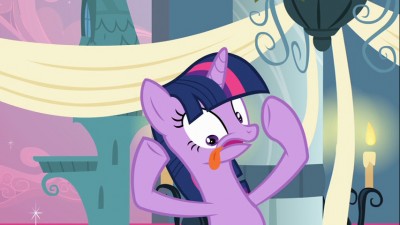 The Bottom Line
Though I don't get the "Brony" thing, as I don't think I'd choose to watch the series on my own, but there's a high enough level of quality in the stories and animation so that I wouldn't actively try to avoid it. The wedding episodes on this disc in particularly are well-made, even if the story's been told before. The DVD looks and sounds fine, though the extras are limited, like most kids DVDs. If having primo copies of the show's highest-profile non-Derpy episodes is important, this is the way to get them, otherwise, just keep taping them off TV.