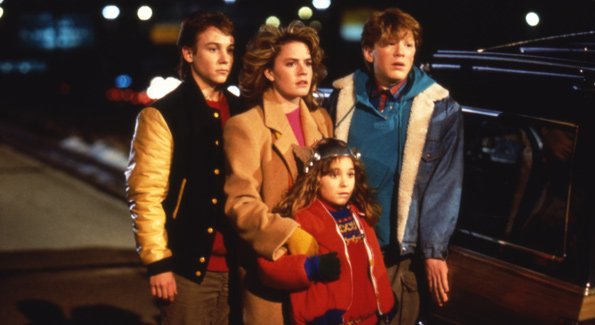 Adventures in Babysitting is one of the liveliest and best teen comedies of the 1980s, and that is largely because it respects its characters, treating them as human beings with inner lives and not simply as hormone-fueled vessels built for sexual slapstick. It's not a perfect film: jokes fall flat and there's a moderate portion of lurching, clanking dialogue. Yet a game cast, an incident-packed plot, and genuinely creative set-pieces keep the movie feeling relatively fresh 25 years after its theatrical release.

Elizabeth Shue plays Chris Parker, and the crush I had on Shue as a teen always comes crashing back every time I see her launch into the fully committed lip-sync number (to "Then He Kissed Me") that opens the film. Parker is a vivacious but romantically naïve 17-year-old who has just been stood up by a boyfriend she idealizes beyond any reasonable measure. Instead, she winds up doomed to spend the evening babysitting for the Andersons: Brad, who at age 15 is more interested in Chris's feminine charms than he is in need of being supervised, and 8-year-old Sara, a fiend for Thor of Marvel Comics (Babysitting was made at a time when this superhero's own film franchise was borderline-unthinkable).

Almost as soon as Chris arrives at the Andersons, things start to go wrong. Chris receives a phone call from her distraught friend Brenda (Penelope Ann Miller), who has run away from home and needs to be picked up at the Chicago bus terminal. Brad's friend Daryl (Anthony Rapp) shows up at the Andersons' house, threatening to hijack the whole evening. Finally, Chris resolves to take the pack of them downtown to rescue Brenda. That's when the movie starts to take off.

This is prolific TV writer David Simkins' only produced feature script. It's a high-energy film that contains a whole lot of great ideas - from the encounter with be-hooked tow-truck driver Pruitt and the kids' descent into Chicago's criminal underbelly, to the blues club sequence in which Parker is forced to improvise a tune and the finale atop the Smurfit-Stone Building. The characters are each clearly delineated: Chris would rather be elsewhere, but her unfailing sense of responsibility keeps her on top of every new situation; Brad is awkward and restrained in his admiration for Chris; Sara is too young to grasp the danger inherent in the evening's events (her gleeful refrain is, "This is great!"); and Daryl is an obnoxious, prank-minded horndog.

Adventures in Babysitting was the directorial debut of Chris Columbus, and it's arguably his best film. Columbus cut his teeth in Hollywood writing clever screenplays like Gremlins, The Goonies, and Young Sherlock Holmes. Those movies had something in common with Babysitting: they were about kids who found themselves in absurd, outlandish situations, and the ingenious ways in which they handled them. When Columbus "graduated" to directing films with larger budgets and bigger stars (Mrs. Doubtfire, Stepmom) he seemed to lose sight of the kind of material that had initially driven his considerable creative instincts. But Adventures in Babysitting caught him still in an earlier stage of inventive ferment, working his small cast into a dynamic that allowed for fast repartee and an improvised feel.

As in 1987, Adventures in Babysitting will still do best with younger audiences, but its charm will not be lost upon viewers of every age. The movie's verve and energetic cast do much to rescue the film from its own faults: the clumsy dialogue mixed with the clever, and the jokes that fall flat among terrific ones.

Image and Sound
Disney's Blu-ray - labeled as a "25th Anniversary Edition" - leaves something to be desired in both the technical and content departments. Visually, the 1.85:1 transfer leans heavily toward grain - too heavily. The image looks weathered in many places, as if the transfer had been struck from a well-worn print. In most places, the 80s-era color palette comes across as both bright and realistic. On the other hand, the age of the film is evident often enough in the image to be distracting. The 5.1 DTS-HD MA soundtrack fares somewhat better. It's an involving track that highlights music (by Michael Kamen, and various Chicago blues musicians) and sound effects with good separation and dynamic range.

Bonus Content
Nothing. How about the trailer? No. The films' 25th anniversary, although emblazoned across the cover artwork, turns out not to be such a cause for celebration - that is, according to the studio that owns the movie.

What will be a fast and funny nostalgia trip for many will likely continue to engage younger audiences, and perhaps some of their parents. The Blu-ray is unspectacular in the technical departments and a failure in terms of bonus content. Rent it.