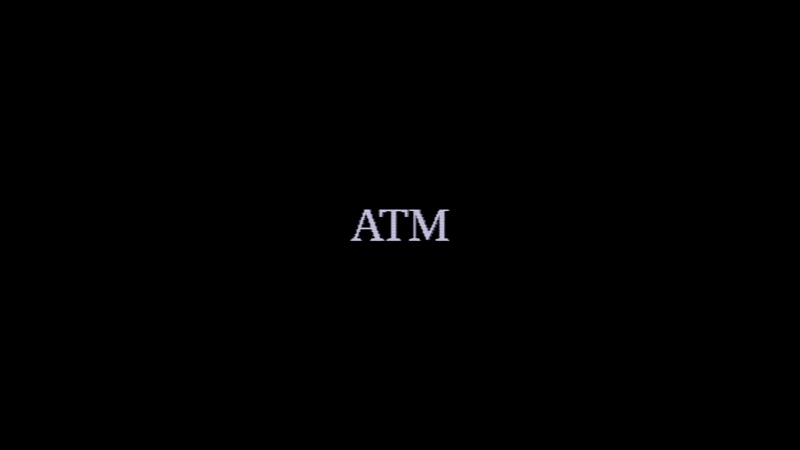 
The Movie
After watching this film, it became obvious that it would hard to talk about it without revealing some spoilers. The problem is, there's not a whole lot to the film, and to talk about what's good or bad risks exposing some of the plot. But in the name of public service, it's better you know a few things and save yourself a few bucks, rather than be surprised and disappointed in the end. After teasing a tense thriller with its trailer, sadly, ATM just didn't deliver on its promise.

David (Brian Geraghty), Emily (Alice Eve) and Corey (Josh Peck) are co-workers at a financial services firm, heading home after a Chistmas party at work. It's Emily's last day at the company, and David offers to drive her home, hoping to not miss out on a chance with her. Corey, who's out of cash, tags along because he needs a ride as well. Hoping to get something to eat, Corey has David drive to a stand-along ATM kiosk so he can get some cash. A few ATM problems later, and all three are in the kiosk, only to find a man in a hooded parka standing, motionless in sub-zero temperatures, outside the door. Trapped by fear, they quickly realize they are in big trouble, with no way out.

First-time feature director David Brooks does a good job of creating atmospheric visuals from a script by Chris Sparling (Buried), with the hooded foe coming off as legitimately creepy and threatening, and the key trio of actors are believable as people pushed to their limits. While the film checks off many of the boxes for a "stuck in a room" movie, including screamed accusations toward each other, extreme end-of-their-rope actions and deep, philosophical discussion, the setting is unique enough to make it all interesting, and the look, which is bathed with middle-of-the-night darkness, makes it stand out from a pack of similar "killer stranger" movies. Unfortunately, there's not enough to fend off the film's more pressing weaknesses. 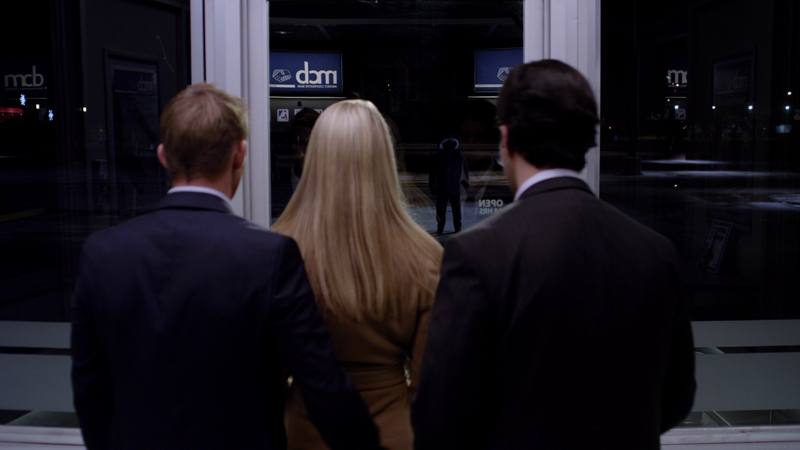 Pacing is one of ATM's two biggest issues, right from the beginning, where it takes over 20 minutes to get things rolling. If there was anything in that first fifth of the film that truly mattered plot-wise, it would be one thing, but it all feels like a lengthy series of red herrings that keep the party from really getting started. From there on out, you're mainly waiting until the next moment of fright, which will come along right on schedule, before the main trio can talk some more. Admittedly, it's hard to find a lot to do in a room the size of some people's closets, but other films have done more with less (like, say...Buried.)

The other key concern is the film's issues with logic. So much of the plot, which is supposed to be rather intricate, like a puzzle from Saw, relies on luck and coincidence. If one thing occurred differently the entire evening, especially the event that starts the whole party, as they park their car a good distance from the ATM kiosk, the majority of the story wouldn't work. There's suspending your disbelief, and then there's just being stupid, which is seemingly the motivation for much of the characters' behaviors. A killer that could have planned for every variable that works against the ATM captives would have been better off becoming a psychic. And if the ending is saying what it seems to say, it just gets even harder to believe.

If the previously mentioned issues weren't enough of a roadblock to a quality thriller, the fact that there's no real pay-off is the big deal-breaker. When trying to solve a mystery, which is certainly what you're dealing with when faced with a shadowy villain seemingly intent on your death, a resolution of some sort is required. While one doesn't need every question answered before the final credits roll (how much did we really know about Se7en's John Doe?) to learn basically nothing over the course of 90 minutes is a frustrating experience. Sure, there's something to be said for the intrigue of the struggle of man against an unknowable, unexplainable force of nature, but that's not the story here, and the aggravation felt as the credits roll is not what's experienced at the end of a good movie.

This Blu-Ray offers both the theatrical and unrated director's cuts, which are example of one of the more unusual alternate edits in recent memory. The director's cut is about five minutes shorter than the theatrical version, and outside of some minor, seemingly pointless dialogue cuts early on, all the editing occurs in the titles and credits of the film. Unfortunately, when you cut something that's already been seen in the film, it's hard to un-see it, so it's difficult to experience it a different way. That said, the director's cut does a better job of setting the tone up front, and limits the disappointment at the end. It's just a mystery as to why these changes were an issue that required different edits, unless the studio wanted to hit a round 90 minutes for some reason.) 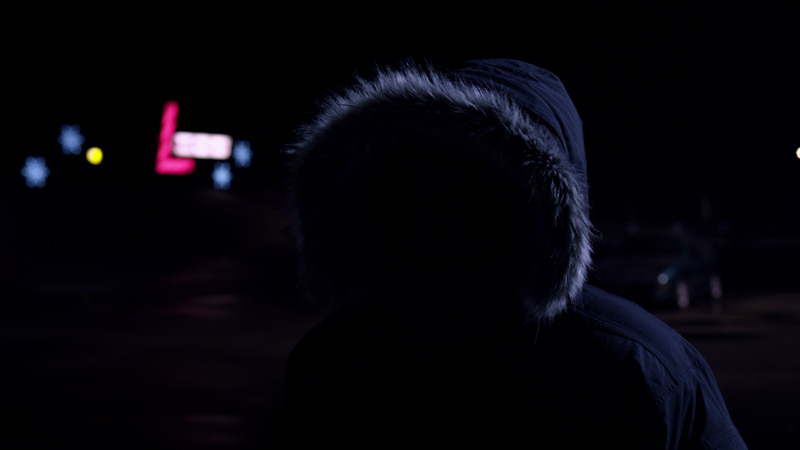 The Disc
The film arrives on a single Blu-Ray disc, which is in a standard Blu-Ray keepcase. The disc has an animated menu, with options to watch the film, select scenes, adjust the set-up and check out the extras. Audio options include English DTS-HD Master Audio 5.1 and PCM Uncompressed 2.0 tracks, while subtitles are available in English SDH and Spanish.

The Quality
The 1080p VC-1-encoded transfer on ATM is impressive all around, with plenty of fine detail throughout (skin textures are particularly sharp) and deep black levels, capturing the film's dark look well. The color palette is certainly limited, leaning heavily to icy blues, but the presentation handles color quite well, and there are no obvious issues with compression artifacts. A solid job across the board.

The DTS-HD Master Audio 5.1 soundtrack sounds quite nice, placing the dialogue consistently in the center channel, while the side and rear speakers handle the sound effects and music, creating an engaging soundfield, with some nice directional effects and during the more action-oriented scenes. The music is especially effective, setting an ominous tone that sells what's happening on-screen. The only annoyance is the inconsistency in the sound of wind outside, which at times disappears for no reason.

The Extras
Aside from the film's enticing trailer, the only extra is a nearly eight-minute making of featurette, featuring interviews with many of the cast and crew, including the writer and director, along with plenty of footage from the set. Considering how limited the production was (with essentially one set for the vast majority of the film) there's not a whole lot to talk about, and there's not a lot of light shone on the perplexing plot questions. 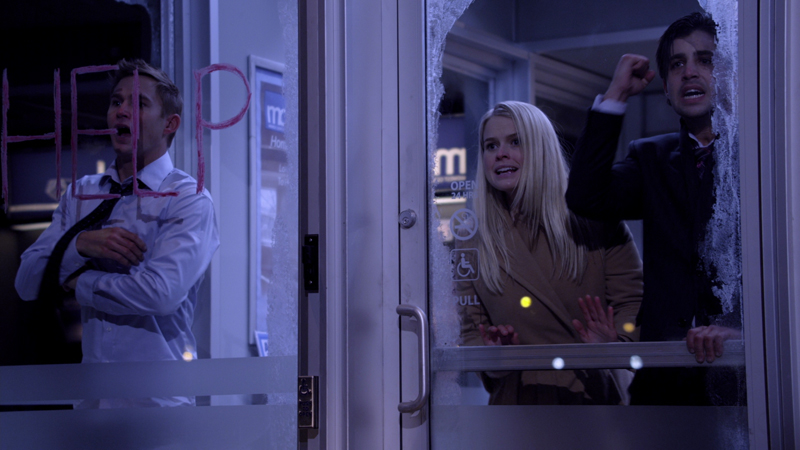 The Bottom Line
Slow to start and weak at the end, ATM takes an idea that suggested genuine scares and combines it with Brooks' polished visual style, but then undermines it with questionable plotting and too many loose ends. The Blu-Ray looks and sounds solid, but there are limited extras, making this one an unlikely choice for most people's collections.Too bad. I really wanted to like it.