Jay & Silent Bob Get Old:Tea Bagging In The UK 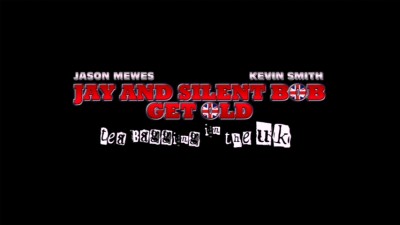 
The Show
For those who only know of him from Clerks or Chasing Amy, Kevin Smith has gone through some changes, finding his muse in marijuana, mostly giving up on directing and embracing his own content-distribution network. Even with all these changes, he continues to make his words his bread and butter, but now they come from his mouth, during a variety of live speaking tours and podcasts (not to mention a TV show and Hulu series.) One of the more popular series he presents is Jay & Silent Bob Get Old, during which Smith and his frequent star Jay Mewes take the stage and talk about old times.

Smith's fans aren't just found in the U.S., so he has taken his "stand-up" act on the international road, including a trip through the United Kingdom in February of 2012. Three of these performances are captured on video in this set, after being available aurally on Smith's website since shortly after the tour. To be honest, despite adding in a bit of animation from Steve Stark, Smith's cartoon-maker of choice, seeing the two men sit behind a desk and chat doesn't add much more than what you get to listening to them do the same, with the exception of the show's finale, "Let Us F**k," where Smith assigns a sexual position for Mewes and an audience member to mime on-stage. Seeing this ridiculousness is better than hearing it. That doesn't make it good, but it is better on video than on a podcast. 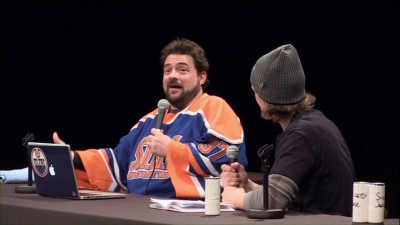 The reason for the podcast's existence is mainly to keep Mewes on the straight and narrow, after years of drug abuse (as described in "Me & My Shadow," a heart-breaking tale of addiction told on Smith's blog and in his blogbook My Boring-Ass Life.) One of the show's many threads is recounting Mewes' lowest points, which are oddly funny, but more often enlightening, disturbing and sometimes touching. These issues are touched upon in these tour stops, especially during the Edinburgh show, where he talks about the effects of his mother's own addiction and illness, and how he found himself on the same path. Though there's some attempt at bringing things around to comedy by talking about sending Jay and Silent Bob to Amsterdam, it's mostly disturbing to hear how easy it was for Mewes to do the damage he did to himself.

When the talk isn't focusing on Mewes and drugs (or at one point, during the Manchester stop, Smith's dying dog) it normally winds up about sex, be it Mewes and his goodly wife, who is tasked with satisfying his odd and frequent requests for sexual congress, or Smith and his saintly spouse. The carnal topics range far and wide, and include, among many other things, Chinese sex enhancement pills, hotel-issue vibrators, sex with vocal accents, sex with Jessica Fletcher, and the joys of prima nocta. Between Mewes' trademark "half, half, whole" description of his sexual technique, the goofy "Let Us F**k" segments and the constant talk about Mewes' genitalia, it becomes a bit too much. Like Jeff Winger said on Community, there comes a point of diminishing returns on the sexiness.

For a couple of guys known for making people laugh (and there are quite a few laughs to be had, especially when they get childish and silly) their conversations can get rather deep, with the Edinburgh show being especially thoughtful, as, in addition to the talk of Jay's mom, they discuss the disappearance of blind belief in myths and legends as we acquire more information. However it's also got plenty about what's under a kilt and the joys of a cool breeze. Call it pot talk, but it's basically two long-time friends talking and letting others listen in. You probably don't need to see that to enjoy it though. 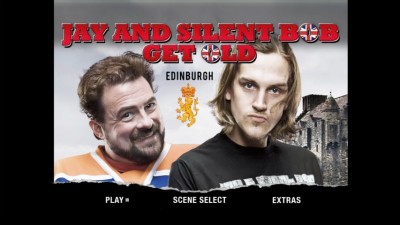 The Discs
The three shows arrive on two DVDs, packed in a clear single-width keepcase with a tray and a promotional insert, which is notable because it lists a second Jay and Silent Bob Get Old DVD, presenting their Irish tour, titled "The Swearing of the Green," though there's no mention of this title online. The discs oddly have pillar-boxed full-frame menus with options to play the shows and check out the extras. There are no audio options and no subtitles, but closed captioning is included.

The Quality
The anamorphic widescreen transfers don't look so great, with an overall soft image that's light on fine detail, and color that's a touch dull (though on some angles the orange of Smith's hockey jersey and the highlights off Smith and Mewes' face are excessively bright.) The black levels seen mainly in the background of the stage are solid though, and there aren't any real issues with compression artifacts, though there's some vibration in the solid color of the table's cover.

The audio is presented with Dolby Digital 2.0 tracks that are unremarkable, though also free of concerns, as their voices are presented free of distortion, and have nice separation from the audience's reactions.

The Extras
The only real bonus footage is in the form of four moments cut from the three shows, none of which are all that great. Considering the shows don't seem to be under any time constraints, it's a bit odd that anything was cut at all.

Also included is a trailer for the set. Seeing how filthy it is, it's hard to imagine where it might have been shown. 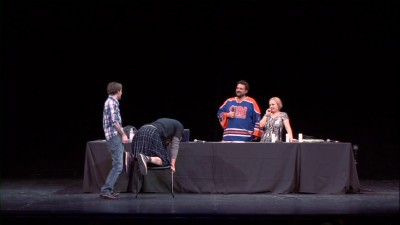 The Bottom Line
If there was more animation to enhance the guys' chats, these videos would have much more value to Smith's fans, who have probably already heard the conversations and aren't getting a whole lot visually. That also goes for the quality of the presentation and the extras, both of which are limited. This one is only for hardcore Smith fans, and even they may consider this set to be a bit of overkill.