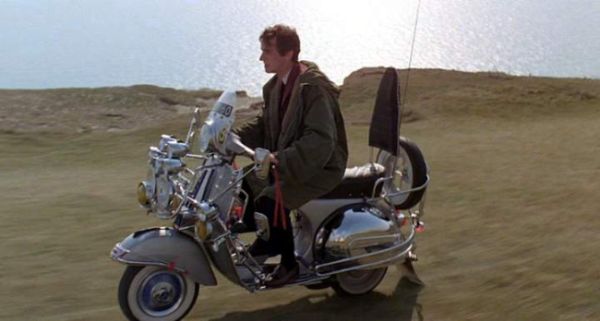 My "memories" of Quadrophenia are by association only. I had never seen the movie until this Blu-ray release from The Criterion Collection, but I had been aware of it - perhaps excessively so - thanks to the neo-Mods of my teenage years. This was in the early 1990s, and although it would be easy enough to label these neo-Mods as misguided poseurs (which they most certainly were), it was somewhat surprising to find that the "real" Mods as portrayed in the movie are just as misguided and inauthentic. Quadrophenia is about the emptiness of the crowd, the conformity of non-conformity, and the dead-ends at the furthest reaches of a subculture.

The Who produced Quadrophenia, and in a move that would seem to attest to some measure of creative integrity, gave the job of writing and directing the movie to film professionals. Although their 1973 double album is the film's inspiration, the screenplay diverges from the album's story. In the film, Jimmy Cooper (Phil Daniels) is a mailroom clerk at an advertising firm whose bottomless angst is released at parties and concerts frequented by his Mod friends. There is great enmity between the Mods and the Rockers, who style themselves after Marlon Brandon in The Wild One. (The Mods ride scooters and the Rockers ride motorcycles; the Mods wear Army-green parkas and the Rockers wear leather jackets.) Jimmy pursues the angelic blonde Steph (Leslie Ash), while the bleached pixie-ish Monkey (Toyah Willcox) nips at his heels.

Quadrophenia is really about Jimmy's growing sense of dislocation both with and without the Mods. Ultimately, Jimmy is forced to reckon with himself when he discovers he cannot simply toss his lot in with the Mods. Late in the film, Jimmy finds that his friends are all implicitly dependent upon the establishment (in the form of regular, square jobs) for their livelihoods and sense of identity. This frees Jimmy, although he's not happy about it. He had truly believed, though uncritically, in the Mods.

Jimmy's reckless indulgence in Mod culture is energetically shot by director Franc Roddam and director of photography Brian Tufano, both of whom participated in the creation of this Criterion release. The camerawork is largely handheld, but captures action with a depth of focus that makes the image immersive without limiting perspective. The film's gritty but spacious photography is one of its best features.

The use of The Who's music, as well as that of other bands, aids the story without dominating it. In other words, Quadrophenia is, far from being a musical, a straightforward, fully-imagined narrative, and the music is only prominent enough to support the idea that the Mod culture was, in part, defined by the music preferred by its members. Although music from the Quadrophenia album is featured on the soundtrack, so is other music of the era - another sign that the band's desire was to recreate an era and tell a story about a specific character (Jimmy), and not to serve up a promotional tool for the band. It's a movie driven by the idea that "belonging" is something that can only exist within one's own skin, and that subcultures are interested not in the souls of their members but in the external symbols embodied by their membership.

Image and Sound
The film has been restored by Criterion and the image presented here (1.85:1) retains a grainy film-like look and the drab color palette envisioned by the filmmakers, while maintaining excellent contrast and a vivid sharpness. The two-channel stereo soundtrack is perfectly adequate and clear, but the newly-created 5.1 DTS-HD MA track (with the band's participation) is stunningly well-separated and mixed. It serves the music particularly well, but dialogue and effects are fully integrated into the new track. An excellent example of a 2.0 to 5.1 conversion.

Bonus Content
A fantastic selection of features illuminates the history behind the film, as well as its recent restoration:

A very well-made film that investigates the dark side of being a "joiner" and the youthful struggle to find an authentic identity, Quadrophenia holds up extremely well. Excellent technical details and interesting bonus content add much to this essential release. Highly recommended.