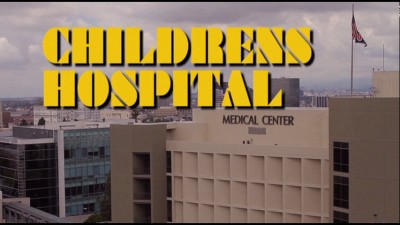 
The Story So Far...
Originally a web series created by Rob Corddry (The Daily Show), Childrens Hospital tells the story of an unusual team of doctors and administrators at a pediatric hospital, including a clown who literally uses the healing power of laughter and a group of docs who can't keep their hands off of each other. Airing on [adult swim], the show, which is just 11 minutes an episode, is entering its fourth season, and the first two were released in a set in May of 2011. DVDTalk has a review of that release.

The Show
Living in New York, I don't have the opportunity to partake in all the star-laden improv and podcast goodness that Los Angeles has to offer, but I listen to plenty of Earwolf podcasts in order to enjoy my favorite alt-comedy stars. (Not to get sidetracked, but perhaps alt-comedy isn't the right term for the seemingly tight-knit gang of comics who populate shows like The League or who guest on Comedy Bang Bang. Perhaps we can just call it State-ly comedy, considering how it all sort of descends spiritually from the classic sketch comedy series. Anyway...) It certainly seems from all the casual chats and sketches they've done that they get along great and that results in some great comedy.

But the best proof that State-ly comics love to work together and do great work together has to be Childrens Hospital. Something about these 11-minute nuggets of late-night hilarity seems to bring together great comic actors and gives them the freedom to create some great TV. It probably starts with the main cast, one of the best top-to-bottom line-ups on television. From Rob Corddry to Malin Ackerman to Rob Heubel and everyone else, there's not a player in the group you'd want to replace, as they're all on the top of their game. It would be hard to even pick a star or MVP on this series, because everyone gets their moment in the spotlight at one point or another, and they've all developed such clearly-defined characters that bring something special to the table. 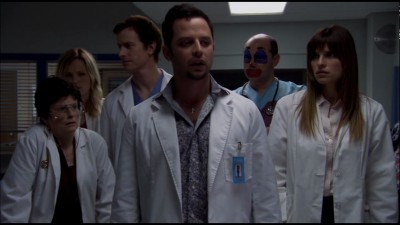 The talent behind the camera has to be a draw as well, considering all the impressive names in the credits. Directing the action, you've got creative forces like Rob Schrab (Community, The Sarah Silverman Program.), Michael Patrick Jann (The State, Reno 911!), Steve Pink (the underrated Hot Tub Time Machine) and the fantastic Tristram Shapeero (Community, Green Wing), while the actors have Schrab, Jason Mantzoukas and two-thirds of Human Giant, in addition to Corddry and company, putting words in their mouths. If you're looking for comedy that's outside the norm, not to mention simply great, having these guys leading the way is pretty much guaranteed gold.

The result of all this comedic innovation and freedom is an all-star line-up of guest stars and cameos. Fans of smart, surreal comedy, the Earwolf empire or of NBC's recent Thursday-night schedule will be in heaven when you see people like Nick Offerman, Thomas Lennon, Sarah Silverman, Nick Kroll, Paul Scheer, Joe LoTruglio and so many more, including odd, yet awesome one-shot cameos, the return of Jordan Peele as the black doctor, and a reunion of Party Down that will make fans of the late, lamented series squee heartily (even if Adam Scott isn't on hand.) You can get a good game of "Hey, Isn't That...?" going, but you'll be enjoying their performances way more than their appearances (especially Kroll and Scheer, who integrate into the team seamlessly.)

The show's biggest strength remains its ability to parody with ease and still remain the same show at it's core, whether it's an homage of '70s dramas (which shows Erinn Hayes is amazing no matter the time period), an Our Town style stage play or a mimicking of CSI's slick mystery solving. The season finale brings back the news magazine Newsreaders, and is hugely effective at continuing the fake world of the actors portraying the series' characters, to the point where Rob Heubel's portrayal of Rob Heubel makes a series about him seem like an interesting possibility. That these homages only run a bit longer than the length of a standard sitcom's first act certainly helps, as they never wear out their welcome.

Though a lot of the laughs come from ridiculous and surreal asides and twists, or from the actor's pure ability, like Ackerman's way of making everything she says hilarious, the stories are pretty good as well, like when the group all moves into the same apartment and has to deal with the over-the-top crowding, or when the team has to double-shift during the night, where they find a porno shooting in the hospital. Of course, the things that get the biggest laughs will always be the ridiculous and the sublime, whether it comes in the form of Chief (Megan Mullaly) and her fetish for the handicapped, Blake (Corddry) and his continuous clown problems, or an adult bar mitzvah performed by Rabbi McJewJew (David Wain.) Part of the joy is knowing you don't know what the next 11 minutes will bring, but it will probably involve a famous face. 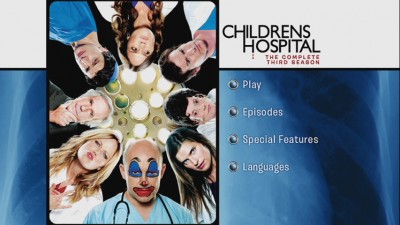 The Discs
The 14 episodes of Childrens Hospital's third season arrive on one DVD, which is packed, with an insert featuring episode descriptions, in a standard keepcase, inside a slipcase. The discs has a static anamorphic widescreen menu with options to play all the episodes, select shows, adjust languages and check out the extras. There are no audio options, but subtitles are available in English SDH and French.

The Quality
The anamorphic widescreen transfers make the show look quite nice, which is important with the ways the show plays around visually. The show is presented with a pretty high level of fine detail, while color is appropriate across the board and black levels are solid (though it's rare that scenes ever approach anything close to dark.) Any issues with compression artifacts are basically non-existent.

The Dolby Digital 2.0 soundtracks are pretty much the same as last time, delivering the dialogue crisply, while maintaining clean separation from the music to keep all the jokes easily heard. There's nothing of note in terms of any dynamic mixing, but there are also no noteable negatives either.

The Extras
The bonus features are very similar to those on the first Childrens Hospital DVDs, just lighter in some areas, but in a higher quantity overall. First up is a set of six web promos, each of which runs between 1:51 and 2:33 in length. In his Maestro character, Heubel is miniaturized and injected into Steve Agee's body, and communicates to some nearby children to explain "What's Going On In There?" Between the kids' questions and reactions, Heubel's decreasing enthusiasm for being inside of some guy and Agee's hysterical illustration of what it's like to be controlled from inside your own body, these bits have frequent laugh-out-loud highlights and should be watched in their entirety. Promos are rarely this good.

The rest of the extras are made up of an assortment of excised material, much of which is as entertaining as the show that airs. Up first is 14:35 of deleted and unaired scenes, presented in episode order. There are some definite gems in the mix here, and those there's no explanation, you have to assume most of this stuff was cut simply for time.

"Glenn and Mom" is a 2:46 collection of clips from one of the season's running jokes, as episodes would begin with Glenn delivering bad news to a mother, but with that Childrens Hospital flavor. These variations didn't make it to air, but probably should have.

The gag reel gets extended this time around, with nearly 11 minutes of screw-ups that are quite enjoyable, especially if Heubel is on hand. That point is firmly established in the 32-second "Bloopers and Screwups," a selection of Heubel's many post-flub songs. 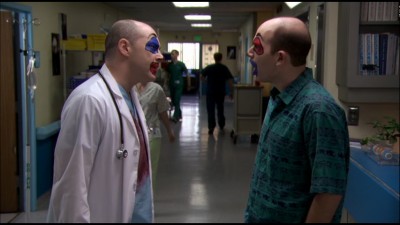 The Bottom Line
When the only negative you can cite about a show is the episodes are too short, you know you're doing well, and that's just the case with Childrens Hospital. Frequently brilliant, always creative and never dull, the show was in fine form in its third go-round, giving comedy geeks the chance to enjoy an incredibly funny ensemble. The DVD adds in a bunch of fun bonus content, and delivers the series in fine quality, which makes this an easy recommendation for comedy fans, especially those who've checked into Childrens before.