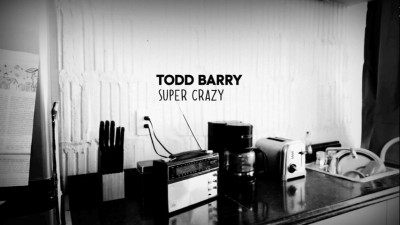 
The Show
Todd Barry is one of those comics who's been seemingly working forever, but has never quite made the breakthrough to the mainstream. It's obvious that he's well-respected in the industry, considering the fact that he continuously works the stand-up circuit, and has been a steady contributor on two of stand-up's hallmark TV series, Dr. Katz, Professional Therapist and Louie. But for some reason he's never crossed-over into the general zeitgeist, remaining a comic's comic. Whether that bothers him or not, only he and those close to him know, but he continues to plug away in the realm of the underrated, where he has earned quite a few fans and made a lot of people laugh.

Surprisingly, though Super Crazy is Barry's fourth stand-up album, it's just his first hour-long stand-up special. Part of that may be his stage presence. If the name of his second album, Medium Energy, wasn't enough of a sarcastic hint, Barry's delivery is low-key, like he's a few minutes away from a nice nap or a few minutes after a nice injection of heroin. Everything comes out a nice gentle, non-abrasive level, whether he's talking about updating the software on his Blackberry, breaking out of a Belgian prison or aggressive prostitutes in Barcelona. This kind of performance forces you to really pay attention, as there are no rhythms or verbal cues to the jokes, just a continuous stream of set-ups and punchlines (again, possibly part of what may be keeping him from stardom. More yelling=more money.) 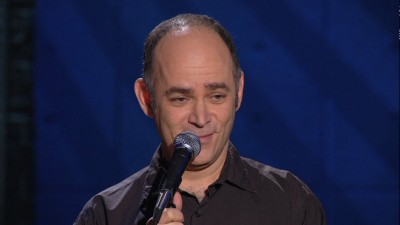 Shot at the Gramercy in New York City in December of 2011, the special showcases Barry's stream of consciousness style, which he utilizes smoothly, segueing from joke to joke in a seemingly effortless manner, even if there's no connective tissue available. He doesn't linger too long on a topic (even if he does note that he's America's number-one topical comic) moving quickly from a story about a promotional appearance on a North Dakota radio station to the financial windfalls in stand-up comedy to a bit about meeting better English speakers in Sweden. Though many of his jokes emerge from his experiences as a professional comic, the ideas are universal, covering restaurants, real estate, online critics and pedophiles in Thailand.

Extremely sarcastic and self-deprecating, Barry's sedate way of performing makes his jokes and observations even more enjoyable. His segment on airport food, and the sad Twitter responses of the Kansas City airport are enhanced by his delivery, while his meta observances on his performances and his interactions with the crowd seem sharper by a lack of audible, emotional punctuation. When you've got a guy telling you he smells terrible thanks to Tom's of Maine or questioning an audience member on their impromptu choice of word, and he's doing it in the measured cadence of a serial killer on the edge of madness, you're probably going to laugh. That he's actually funny doesn't hurt. 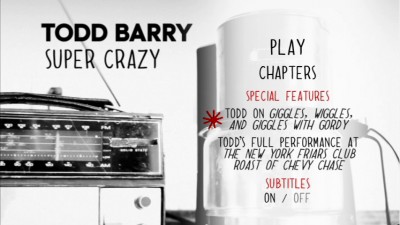 The DVD
The 60-minute special arrives on one DVD, in a standard-width keepcase. The disc has a mildly animated, anamorphic widescreen menu with options to play the special, select scenes, adjust the set-up and check out the extras. There are no audio options, while English SDH subtitles are available.

The Quality
The anamorphic widescreen transfer looks solid, with a decent amount of fine detail on Barry and the background, while the colors, blues on the stage and reds in the audience, are deep and appropriate. The fleshtones on Barry look nice as well, serving to separate him from the settings. There are no concerns about compression artifacts to be found.

The Dolby Digital 2.0 audio track offers up a standard stand-up presentation, presenting Barry's comedy clearly, with good separation from the audience's reactions. There's nothing dynamic about the mix, but it's all nice and clean.

The Extras
Up first amongst the extras is a 5:32 featurette called "Todd on Giggles, Wiggles and Giggles with Gordy." Barry joins a guy named Gordon on his comedy video podcast, supposedly invited there for an interview for Gordon's college thesis. Light on authenticity, the focus is more on Gordy and his cameraman, with Barry offering reactions. Perhaps if it felt more real, it would be more entertaining.

The other extra is the full clip from Barry's spot on The New York Friar's Club Roast of Chevy Chase. Though he doesn't fire many shots at Chase, saving his best hits for the celebrities who gathered for the roast, there's something about his barbs delivered in his understated style, that makes them sting a little bit more. 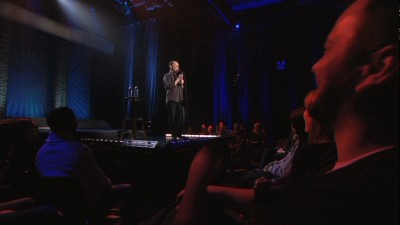 The Bottom Line
Barry may not be a comedy superstar, but he's a superstar in comedy, delivering a dependably funny set every time he takes the stage, with Super Crazy being no exception. The DVD looks and sounds solid, and has a few brief but amusing extras to go with it, which makes it a good pick-up for stand-up fans and Barry fans especially.