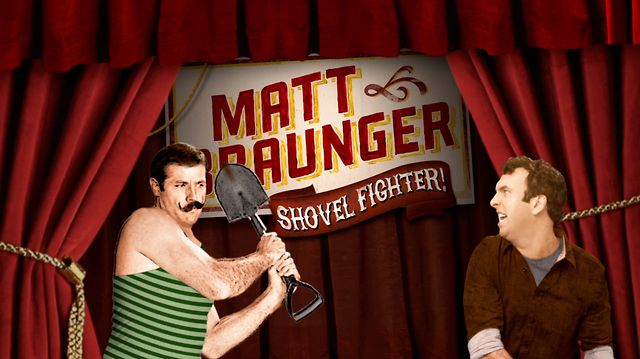 Comedians are always better live. They tend to be looser, more relaxed, and more likely to improvise and do bits of crowd work when they know they aren't being taped for the judgment of millions. Stand-up comics spend the better part of each year honing a new hour of material; from that hour, they cull five minutes to polish for the late night talk shows, should they receive those highly sought-after calls. When it comes to putting together a stand-up special for Comedy Central (or HBO, or Showtime) the pressure is even higher: we're not talking about five minutes of fine-tuned setups, but a full 60 minutes. The challenge for comedians who find themselves at this watershed moment in their careers is to cram as many jokes into that set as possible, while retaining whatever personal qualities of delivery (a.k.a., style) that got them the gig in the first place. But rapid-fire performance and maintaining a distinctive persona do not always mix well. Usually the latter is sacrificed to preserve the former.

I've seen Matt Braunger live two or three times, and he is fantastic. He is quick on his feet and has a disarmingly scattered presence that adds a lot to his act. Braunger's strength is a seemingly-improvised delivery that forgoes most of the usual stand-up "filler" lines - things like, "You ever wonder...?" and "Here's something strange..." But, within the tightly-compressed and timing-phobic confines of the taped TV special, Braunger's delivery loses a bit of that vibe. This is, of course, part and parcel of the understood limitations of this particular format.

Image and Sound
This brand-new special looks great on DVD. The enhanced 1.78:1 image is crisp with surprisingly rich colors. Braunger's stage is lit in sumptuous reds and golds, which look terrific here. The stereo soundtrack replicates the ambience of the taping at New York's Gramercy Theatre.

I am a strong supporter of stand-up comedy as an art form, and I attend shows and interview comedians whenever possible. The DVD is good if not exemplary stand-up, but Matt Braunger is well worth seeing live. The DVD is fine, but be sureto seek him out next time he's in your neck of the woods. Rent it.