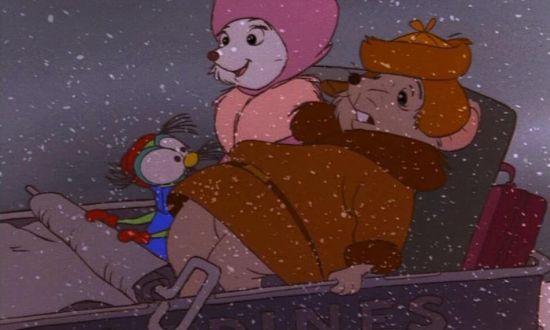 Take two of the mice from Cinderella, a couple of the alligators from the sequence in Fantasia with alligators in it, the evil villainess from 101 Dalmatians, a few other familiar character types, and you've got The Rescuers, one of the Disney company's more forgettable efforts from that dark period of their (and everyone else's) history: the 1970s. Although American film flourished in that decade, Disney's output did not. I have a soft spot for Robin Hood, but The Aristocats and The Rescuers are not among the finest of Disney's 51 animated features released to date. There's nothing really wrong with The Rescuers, except that its characters are derivative, the visuals are drab, the animation and design uninspired and the humor pedestrian. These are not the hallmarks of Disney's animated output, but nobody's perfect. Blame the '70s.

The Rescue Aid Society, an organization of mice operating within the walls of the United Nations building in New York City, receives a message from a young orphan named Penny who is trapped in the Louisiana bayou. The society sends Miss Bianca (Eva Gabor) and Bernard (Bob Newhart) to rescue her from the hands of Madame Medusa (Geraldine Page), who holds her captive because she is small enough to crawl into a cave in which rests the world's largest diamond, the Devil's Eye.

From here on out, things are fairly predictable. Medusa's two alligators, Brutus and Nero, provide the movie's biggest threat, although their snapping jaws do little more than lift things (they don't actually bite). There's Oroville, the memorable albatross/passenger aircraft, voiced by Jim Jordan (a.k.a. Fibber McGee, for those of us who are either over the age of 60 or used to check weird cassettes of old radio shows out of the library in the early '80s.) The movie also features some incredibly sappy songs, sung by Shelby Flint, another name that has been more or less lost to history (although she did perform a very nice cover of Vince Guaraldi's "Cast Your Fate to the Wind" in 1966).

Gabor and Newhart are very game as Miss Bianca and Bernard. It's a shame that the script couldn't do more with their characters; their most individuating aspects are their costumes. The movie will entertain kids, no doubt; but it just skims over the surface of what we all know a Disney feature can be. It lacks the emotional weight and visual artistry of the studio's best known work.

In 1990, a sequel was produced that reflected the sea change in film animation that had taken hold in the intervening 13 years - not to mention the resurgence of the Disney studio and brand itself. The Rescuers Down Under reunites most of the main cast (John Candy voices Orville this time) for another tale of mice thwarting vile kidnappers. This time Miss Bianca and Bernard go after the poacher McLeach (George C. Scott!) who has seized a boy named Cody because he knows how to find a gigantic eagle known as Marahute.

What the sequel has going for it is amazing design and top-flight animation. This film was a part of Disney's 1990s revival, which was led by The Little Mermaid. (Disney's next animated feature, Beauty and the Beast, would be nominated for Best Picture.) The Rescuers Down Under is, visually, very much a part of this technically superior group of films. Its story, however, is not as careful or enchanting as those others. The film, which took years to prepare, seems to be an outgrowth of the '80s-era American fascination with all things Australian, and in this sense, the movie was dated at the time of release. Which is not to say there isn't value in the movie's setting - after all, the outback is beautifully rendered. The real problem is that the drama of the film and the main characters in particular are just as flavorless as they were in the original.

Image and Sound
The technical aspects of both films are presented flawlessly. Both features are presented in the aspect ratio of their original negatives (1.66:1) with 5.1 DTS-HD Master Audio soundtracks. Naturally, the sequel comes off better in technical terms; it benefits from a more recent image, a better-animated image, and a more spaciously-designed soundtrack than its predecessor, which was released in mono. The Rescuers was also more cheaply animated, which is evident in its sketchier style as well as its less fluid renderings; in fact, its animation compares poorly with the majority of Disney's animated features. As for the Blu-ray's qualities themselves, what's presented here is as technically excellent as it could possibly be.

Bonus Content
Disney has included a handful of ancillary features, only a couple of which are directly related to the movie.

Not the most memorable entries in Disney's storied catalog of animated features, The Rescuers and its sequel will still be thoroughly enjoyed by children. They are not without their cleverness, and in the case of The Rescuers Down Under, beauty. A nice package from Disney is marred by some seemingly arbitrary extras. Rent it.