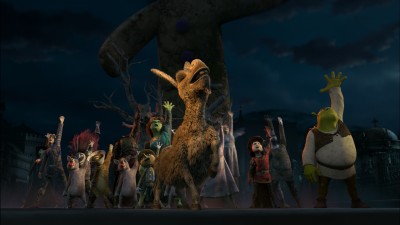 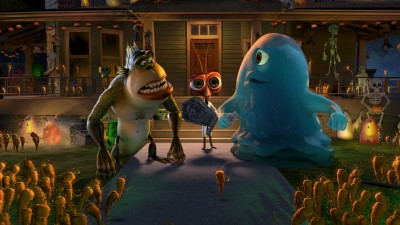 CLICK on ALL images in this review for full resolution screenshots

Each October, I comb through my horror films and watch as many as my schedule allows, and this year is no exception. But, why do studios have to work under the assumption that we crave nothing but bad make-up and buckets of red corn syrup? Can't we have more special that actually capture the essence of the holiday? Sure, there's It's the Great Pumpkin, Charlie Brown, The Simpsons Treehouse of Horror, some fun tales starring our favorite Disney characters and a smattering of Scooby-Doo episodes that fit the bill. That being said, there isn't much in my home video collection that can truly be called a 'Halloween special', and it's disappointing to see Christmas as the sole holiday getting all the entertainment love year after year. Halloween is my favorite time of year, and I'm sure I'm not alone in that regard. Well, if you've been feeling burned by the lack of spooky fun such as I have, then you're going to want to check out Dreamworks Spooky Stories on Blu-ray. When I saw this creep its way onto retail shelves at the end of August, I was skeptical that it would be worth my time or hard earned money. Although it featured beloved characters from both Shrek and Monsters vs. Aliens, my conscience was throwing up red flags screaming, "Cash in! CASH IN!" Given the opportunity to finally screen this collection, I can now lay that premature skepticism to eternal rest, because this Blu-ray is bound to become a Halloween staple in our home.

All I was really expecting out of this collection were the two half hour specials that have made their rounds on TV - Scared Shrekless and Monsters vs. Aliens - Mutant Pumpkins From Outer Space. So, I was pleasantly surprised to see the inclusion of Shrek's Thrilling Tales, a collection of four new shorts. They don't beef the run time up very much (which is around 76 minutes overall), but they're highly entertaining additions to the featured franchises. I know, you're probably as skeptical as I was, and I really can't blame you. Supplemental shorts often fail to replicate the charm of their feature length counterparts - The writing comes off uninspired; the plot's phoned in while jokes and gags are rarely witty. Thankfully, that's not the case here. After all was said and done, it was obvious to me that Dreamworks cares about their characters and respective universes as much as Disney does theirs. There wasn't a single aspect of production that was developed to a lower standard - The cast are all as lively as they ever were. The writing is consistently clever and funny and provides plenty of winks and nods to the feature length films. Animation hasn't taken a hit either, as character and environmental modeling have the detail you would expect to see in theaters. 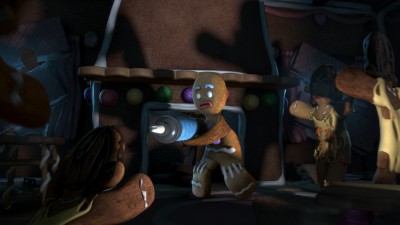 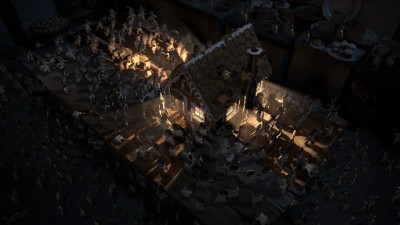 Although I had a great time with both franchises theatrically, I far prefer Shrek and that holds true with these Halloween offerings. For one, these shorts weren't afraid to focus on some of the secondary characters like Gingy, the Big Bad Wolf and the Three Little Pigs. Their comedic value was priceless on the big screen, but that was only because they were used sparingly. They're given their time to shine in this collection, but never to the point where they irritate and grate on your nerves. Furthermore, quite a few characters that we never thought we'd see again make an appearance for some ghoulish fun. The Monsters vs. Aliens shorts are a lot of fun and actually have an edge in creativity, but I just feel the characters in the Shrek-verse are fleshed out enough that I identify with them more. I also find the twisted fairy tale setting to be much more intriguing.

All in all, this is a great collection that truly nails the Halloween spirit. Most importantly, this is something the entire family can enjoy. I tried to watch some of this with my two year old son just to get a taste before he had to take a bath. As you can imagine, trying to turn this off and convince him it was time to start getting ready for bed didn't go over well. So, we watched the whole thing together and he was only slightly scared once, but it was easy to talk him down so, it wasn't that bad. He didn't have any nightmares either. The end result is that this is now his personal favorite for Halloween, and as far as my wife and I are concerned, replay value is looking good. Outside of the fun tales, there's plenty of references to horror and suspense films of ole - Rear Window, Night of the Living Dead, Frankenstein, Dr. Jekyll and Mister Hyde, The Exorcist and even E.T. - and we loved spotting one homage after the other. Thanks to Dreamworks entertainment, our family has found a new tradition and I hope some of their other franchises follow suit in years to come. Here's a quick rundown of the shorts that appear on disc: 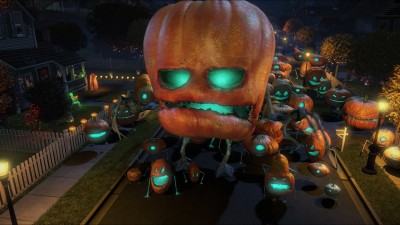 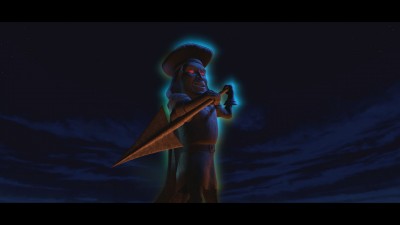 -Thriller - You may be thinking it's sort of a tease to call a 6 minute short Thriller since it's probably not what you expect it to be... but don't worry. This is exactly what it sounds like. The cast of Shrek both living and dead alike perform their own rendition of Michael Jackson's classic Halloween jam. There's no real substance to this piece, but it's a blast.

-The Ghost of Farquaad - Shrek, Donkey and Fiona pick a heck of a night to get lost! Fiona is kidnapped in an eerie forest, and the chase to rescue her leads the lumbering green ogre and his donkey to Lord Farquaad's tomb. Needless to say, he isn't happy to see them show their face (and ass - sorry, couldn't resist) at his final resting place!

-Scared Shrekless - Shrek's little ogre children are ready for their first Halloween. Their parents are, of course, thrilled to teach their kids the finer art of scaring the pants off of people. Donkey and friends are hoping they can conjure up some frights and scare Shrek and Fiona, but their efforts are futile. In one last attempt to chill the green monster to the bone, Donkey leads everyone to Lord Farquaad's abandoned castle for a night of scary stories.

-The Pig Who Cried Werewolf - Heinrich has had a bad spot of luck, and is stuck in a wheelchair at home with the other two Three Little Pigs. With little to do, he spies on his neighbor through a telescope and fears something sinister might be going on across the way. Of course, this pig has ironically cried wolf too many times already. Is his neighbor some sort of maniac or is a lack of context causing a misunderstanding? The answer won't surprise anyone, I'm sure. He isn't called the Big Bad Wolf for nothing!

-Monsters vs. Aliens - Mutant Pumpkins From Outer Space - The monsters aren't sure how to celebrate All Hallow's Eve, but the appearance of a UFO in Ginormica's hometown needs to be investigated. The monsters go door-to-door trick-or-treating in an effort to flush out the aliens, but a pumpkin patch come alive is causing a bit more trouble than they anticipated.

-Night of the Living Carrots (Monsters vs. Aliens) - This takes place right after the events in Mutant Pumpkins From Outer Space, and this time, a horde of carrots are turning people into zombies. With no time to lose, Bob finds himself squaring off against the zombie threat on his own.

This 1080p, AVC encoded transfer (1.78:1) is absolutely gorgeous. There's no question that these shorts have been provided the same attention to detail as their theatrical counterparts. Sharpness, detail and clarity are flawless. Black levels are deep and inky without crushing the image, and the contrast is always spot on. It's a good thing, too, because these specials go all out in providing atmospheric fright, and anything less than perfection would have been unacceptable. Colors complete the intended Halloween vibe- be it Lord Farquaad's memorial statue standing at attention in the dark with glowing red eyes, jack-o-lanterns and torches lighting many a scene, or the Halloween lights on display in Ginormica's hometown. There's no compression artifacts or banding to worry about either. These Halloween specials meet the flawless presentations that Dreamworks films are known for on the format, and will be a welcome sight for anyone looking for some decent ambience on All Hallow's Eve.

Is it any surprise that Dreamworks knocked it out of the park with their lossless 7.1 Dolby TrueHD track? OK, I have to admit, I am a little. Not because Dreamworks isn't known for quality home video releases, but because I wouldn't have expected that much attention to be paid to a couple of half hour specials and a bunch of shorts. But, much like the video presentation, the audio sounds like it was made for theatrical screenings. Dialogue is always crisp and clear, but that pretty much goes without saying. The sound effects are the real star here - There's an impressive degree of environmental ambience, surround effects envelop you, and the LFE rumbles enough to knock a witch off her broom. The music has a quality that makes it sound like you're in the middle of the ghoul pack on Thriller. I know it sounds weird to say this about a bunch of shorts, but turn this one up loud for the best experience.

-Night of the Living Carrot Pop-Ups - A trivia track for the respective short.

-World of Dreamworks Animation - This is really just a big bunch of advertisement - Previews, music videos... you name it, it's here. Is it worth the time? That's an entirely different story. Chances are if you're watching this release, you don't need to be 'sold' on other Dreamworks properties.

Also included is a copy of this release on DVD. 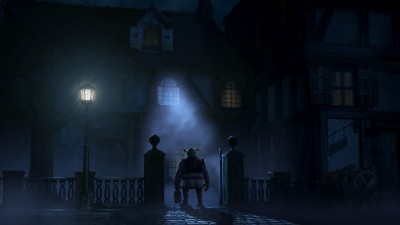 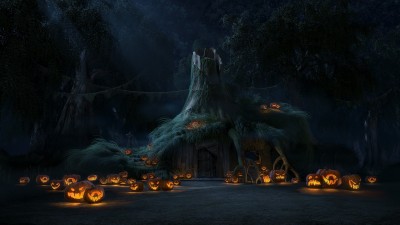 Finally! A decent series of Halloween shorts that don't spit in the face of their founding properties! They're smart, funny and just entertaining all around. There's plenty of horror favorites that the writers and animators pay homage to, and they do so without robbing us of the wit that made Shrek and Monsters vs. Aliens so enjoyable in the first place. Better yet, this is a solid 76 minutes of jack-o-lantern carving holiday shrieks the entire family can enjoy together. Not only is the production value stellar, but the discs A/V presentation is flawless. Some extras would have been nice, but these shorts are so fun it doesn't really hamper the experience. Highly recommended.