Pirates! Band of Misfits, The 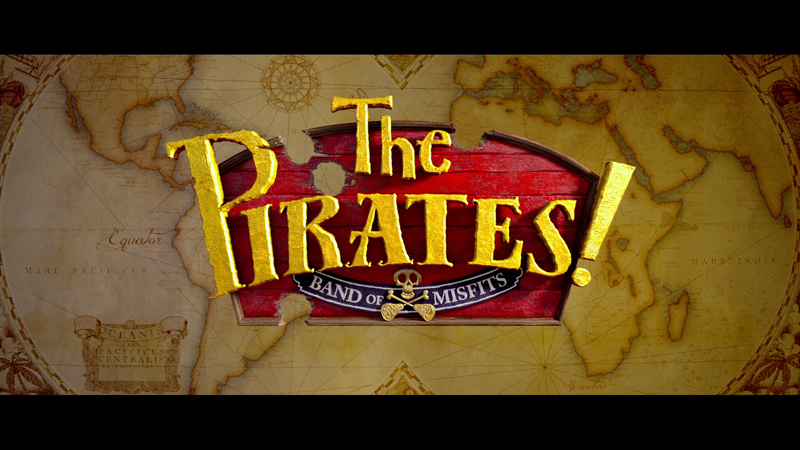 
The Movie
Because of the way it looks, most people will assume that Nick Park, of Wallace & Gromit fame, was behind The Pirates!. It's not a totally misguided thought, considering his long-time animation studio, Aardman Animation is behind it, and the character style is straight out of Wallace & Gromit's world. This film, however, is the baby of director Peter Lord, which is almost as exciting as seeing Park's name, since Lord, working alongside Park, helped bring us the fantastic Chicken Run. Now, working from Gideon Defoe's book (and script), he's given us a peek inside another group of rebelious, uncontrollable animals, namely pirates.

The pirates here are neither the swashbuckling adventurers of the Johnny Depp films, nor the murderous scoundrels roaming the coasts of Africa. If anything, they belong perhaps in The Pirate Movie. Led by the Pirate Captain (Hugh Grant), these pirates are more interested in Ham Night (naturally featuring their favorite meat) than hijacking a ship, in part because of a crew made up of less-than-stellar pirates, like Albino Pirate (Anton Yelchin), Pirate with Gout (Brendan Gleeson), Surprisingly Curvaceous Pirate (Ashley Jensen) and Pirate Who Likes Sunsets and Kittens (Al Roker.) Only the Pirate Captain's second in command, Pirate with a Scarf (Martin Freeman) is serious enough to be a good pirate, and he's far from bloodthirsty. They are seemingly content to float around the seas, until the Captain gets it in his head to try and win the Pirate of the Year award, against competition from much better pirates, Cutlass Liz (Selma Hayek) and Black Bellamy (Jeremy Piven.) 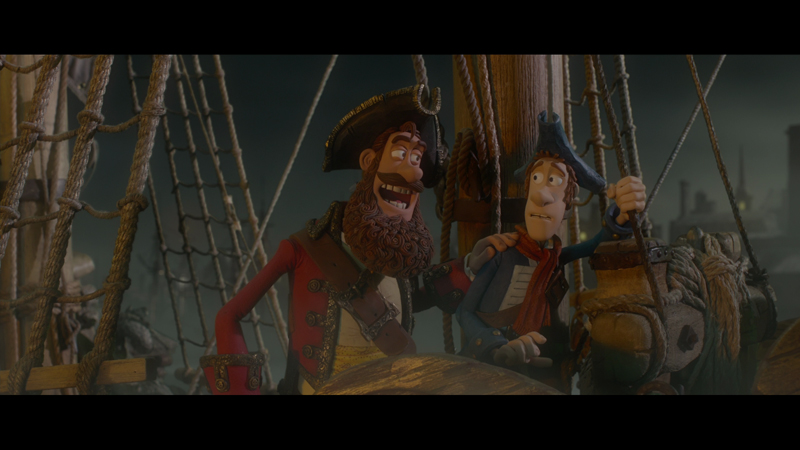 Needing to make a big score to win the trophy, the pirates undertake a very funny series of raids, before meeting Charles Darwin (David Tennant.) This leads to a bout of pirate science, a run-in with the queen of England (Imelda Staunton) and a trademark Aardman chase scene involving a bath tub full of pirates. It all gets very silly, especially when it comes to Darwin's right-hand chimpanzee Mr. Bobo, who hilariously communicates through a very handy set of cards that are one of the best visual gags in recent cartoon history. Though the main story is a touch light on plot, plowing through the Pirate Captain's screw-ups and attempts to fix them in a scant 88 minutes, there are plenty of laughs along the way, both smart, like references to (and appearances by) the Elephant Man, and just plain goofy, basically anything involving the Captain's mostly-rubbish crew.

Though viewed mainly as a kids movie, The Pirates! is really a work of art, like most things with the name Aardman attached to it. The actors' performances, including Grant's puffy-chested pirate, Freeman's straight-man and Brian Blessed as the Pirate King (a part he was born to play), are uniformly entertaining, but the animation is incredible, adding at least 75% of the palpable joy that radiates from the movie. Though Aardman has abandoned pure stop-motion animation, filling in gaps in the production effort with pixels, the feeling of those sculpted characters lives on through the rest of the film, which takes place in meticulously-crafted sets that scream creativity. When you see Queen Victoria reveal the steam-powered magic she hides beneath her skirt, you know you're watching something special. 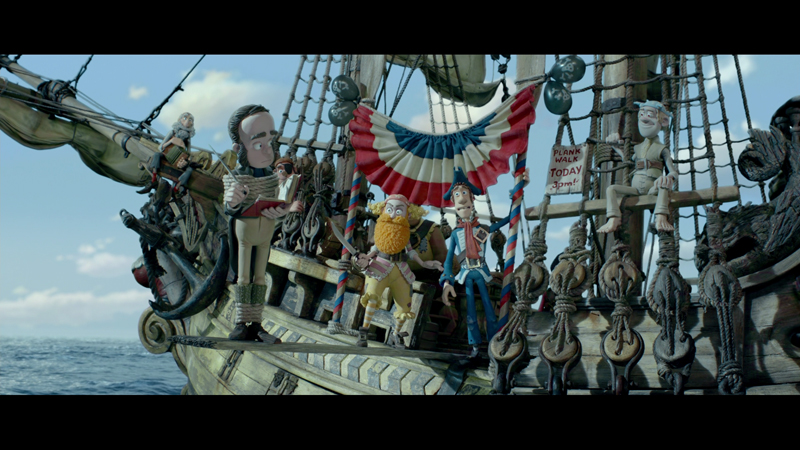 The Discs
The film arrives in a three-disc set (1 3D Blu-Ray, 1 Blu-Ray, 1 DVD) which is packed in a slightly-larger-than-average clear Blu-Ray keepcase, with a dual-hubbed tray and a slipcover featuring a 3D lenticular cover. The Blu-Ray has an animated menu, with options to watch the film, select scenes, adjust the set-up and check out the extras. Audio options include an English and French DTS-HD Master Audio 5.1 tracks, a Spanish Dolby Digital 5.1 track, and an English Dolby Digital 2.0 Descriptive Video Service track, while subtitles are available in English, English SDH, French and Spanish.

The Quality
Though there's plenty about the 1080p, AVC-encoded 2.35:1 transfer to like, the thing that stands out most is the level of fine detail, which is astounding. showing off all the hard work the animators put into the film. Details like the textures in fabrics, the whirls in wood and the curls in the Pirate Captain's luxurious beard are beautifully reproduced, along with tons of small gags in the backgrounds of scenes (many of which are repeated larger during the credits.) The detail is so overwhelming, you'll find your eyes drifting from the characters to small bricks off in the corner of the screen. Impressively, despite the clarity of the transfer, it's hard to tell where the stop-motion ends and the CG begins (with one major exception during the credits.) Color is appropriate and vivid across the board, while the black levels are nice and deep, and there's not a speck of concern about compression artifacts. This presentation makes me want Chicken Run on Blu-Ray ASAP.

For 3D fans, the 1080p MVC-encoded transfer is great to look at, but it doesn't push the envelope in terms of dimensionality, leaning more toward competent than mind-blowing. Thankfully, the movie doesn't overload on in-your-face 3D gimmicks, choosing a few well-placed plane-breakers instead, like the awesome bath-tub chase, with most scenes settling for solid separation between foreground elements and the backgrounds. It seems like most 3D movies these days seem to lighten the 3D elements as the plot really gets going, and The Pirates! is no different in that matter, with the exception of a gorgeously deep fight sequence late in the game.

The DTS-HD Master Audio 5.1 track doesn't offer up the same wonderful detail as the image, but it doesn't take many missteps either, putting the dialogue front and center, where it's offered with clarity and strength. The side and rear speakers get some minor atmospheric effects, along with some nice sound effects and the score and soundtrack, which pumps out some great music, keeping the film's energy going pretty much continuously. There's not a lot of dynamic mixing at work during the film, but that doesn't keep the sound from being engaging throughout.

The Extras
On Blu-Ray, you get a healthy spread of extras, starting with an audio commentary with Lord, co-director Jeff Hewitt and editor Justin Krish. Though the participants are a tad low-key, it's certainly an informative track, presenting plenty of behind-the-scenes details about the production, pointing out what's CG and such. They are very British, so they are constantly making dry little jokes, but they share so many details it's easy to keep interest.

So You Want to Be a Pirate! is an all-new The Pirates! cartoon that goes beyond the usual mini-movies many animated movies offer. Here, you get a full 18-minute short, starring the Pirate Captain in his own talk show/orientation movie, with interviews, a cooking segment, a PSA and more. It's a fun watch that shows the characters' appeal extends beyond the situations in the film.

"Pirate Disguise Dress-Up" is a matching game, where you're shown a random assembly of pirate body parts, which is then hidden and you have to beat the clock and match them from memory. It's not the hardest game, but you have to pay attention.

Animation fans who want more like the commentary, there are two more extras for you, starting with "From Stop to Motion," a 21-minute look at how the movie was made, with footage from the production and the voice recordings and interviews with many of the people involved. Combine the crew's fun personalities and some bonus animation, and you get a featurette that's entertaining, informative and in-depth. After that, there's the 8:22 "Creating the Bath Tub Chase Sequence," focusing on that particularly challenging scene, showing some of the secrets behind the production, making it particularly insightful.

There's even more for the adults in the form of two early shorts by Lord, "Wat's Pig" (11 min) and "War Story" (5 min.) "War Story," an animated story of WWII, taken from a real interview with an elderly man, is more impressive and creative than "Wat's Pig," a tale of two brothers separated at birth, but "Wat's Pig" does show some of the innovative style Lord would use later on. Both films come with optional commentary by Lord, though these are much shorter than the films, acting more like intros than detailed backgrounds. The effort is appreciated though.

The DVD version of the film includes the commentary and the short film, but also has "Mr. Bobo's Flash Card Challenge," where you get to solve a series of word puzzles. If you were ever a fan of GAMES Magazine, these are cute and enjoyable, and will be a genuine challenge for younger viewers. There's also a web link for the film's website, which has access to more games and 15 neat coloring sheets. Considering you can access this without the DVD, it's hard to really call this an extra though.

Also included with the set is a code to download an Ultraviolet file of the film. 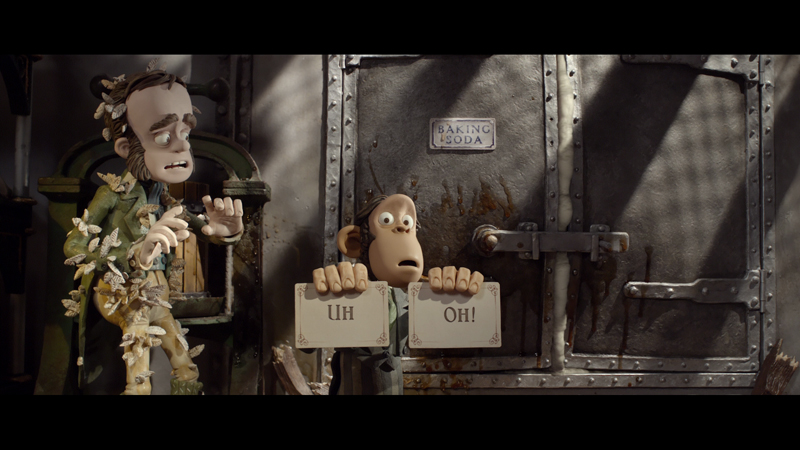 The Bottom Line
The Pirates! is another classic from the mad geniuses at Aardman, a quick confection that's consistently enjoyable and a non-stop treat for the eyes. The Blu-Ray looks great in 2D or 3D (though the 3D isn't exactly Avatar), while the extras are impressive compared to what passes for bonus content on Blu-Ray nowadays, and offers something for adults and kids alike. Families looking for a fun time for everyone watching will find it here.