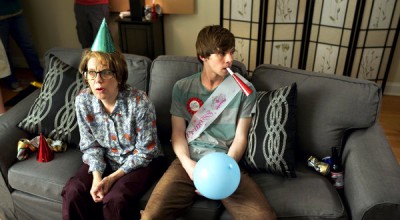 Nate & Margaret is a small movie. In a good way. It's focused and intimate, and follows the oddball friendship of 19-year-old film student Nate (Tyler Ross) and 52-year-old spinster Margaret (Natalie West). The pair lives in the same apartment building, and is practically inseparable until Nate meets his first boyfriend and distances himself from Margaret. Director Nathan Adloff's film is sweet and believable, with a positive attitude in a cynical world. The similarities to Harold and Maude are cursory, and Nate & Margaret is its own exploration of ageless friendship.

Eyes quickly turn to the semi-old lady in the room when Margaret accompanies Nate to college parties, shuffling around without a drink in constant search of bubbly Nate. Margaret is a pleasant companion for Nate, and brings the sensibilities of her generation without imposing them upon Nate, who is coming into this own socially. As Nate pursues a career in film, Margaret decides to try stand-up comedy. Her first open mic appearances are cringe worthy, and Margaret's routine mostly concerns spousal abuse. The film never commits to whether this comedy is painfully personal or simply parody, but Margaret has a less-than-pleasant view on relationships. Nate meets aggressive, experienced James (Conor McCahill) and they begin dating, but James is less taken with Margaret's quirky personality.

Ross again plays an intelligent, gay teen - as he did in The Wise Kids - and, while he risks getting typecasted, his performance is authentic and entertaining. West is similarly good, and gives Margaret the frazzled look of a woman constantly fumbling for the right words in social situations. She manages to make her unusual character relatable instead of irritating. Neither character is perfect. Margaret is too possessive of Nate, who quickly caves when James wants to bail on a dinner party at Margaret's apartment. The film is set on universal city streets, and Nate's assorted friends are more accepting of cultural and sexual diversity than Nate's older companion.

Although the ending of Nate & Margaret feels slightly rushed, there is plenty to admire here. The film finds humor in its characters' routines and relationships. We don't know everything about Nate and Margaret, just that they are friends, and that's good enough for me. The film avoids saccharine moralizing and trite lessons, and instead plays out as if Nate and Margaret are real people living somewhere today. It's nice when a movie chooses reality over fiction.

The DVD's 1.78:1 anamorphic widescreen transfer is generally excellent, and features solid detail and clarity. Compression artifacts are few and far between, and scenes have nice texture and depth. Black levels are good, skin tones accurate and colors nicely saturated. There's a bit of banding in a few outdoor scenes, but overall things look quite good.

The 5.1 Dolby Digital track gets the job done with clear dialogue and an appropriate balance for effects and score. There are some light ambient effects that move to the surrounds, and absolutely no hiss or distortion. English captions are available.

Breaking Glass Pictures really went all out with the bonus features on this DVD, and fans of the film will be very pleased. There are Four(!) Commentaries: 1) Picture-in-Picture Commentary with Nathan Adloff, Tyler Ross and Natalie West; 2) Audio Commentary from Adloff, Ross and West; 3) Audio Commentary with Adloff, Cinematographer Brian Levin and Production Designer Chelsea Warren; and 4) Audio Commentary from Adloff and writer Justin D.M. Palmer. There's a ton of information provided in these four commentaries, and, while there is obviously some overlap, viewers interested in independent filmmaking will love these. Next up are Three Audition Tapes for McCahill (8:54), Ross (6:10) and Ross and Steve Lenz (5:33). There's also a short look Behind the Scenes (2:21), Five Deleted Scenes (4:20), and Outtakes (7:49). Of particular interest if Adloff's short film, Untied Strangers (18:44), which is tangentially related to Nate's student film. Finally, you get a Photo Gallery (3:19) and the Trailer (2:52).

The mismatched friendship at the heart of Nate & Margaret is never overplayed, and Director Nathan Adloff crafts a funny, touching film about relationships and emotional development. Breaking Glass Pictures' DVD features solid picture and sound and a boatload of bonus features. Highly Recommended.