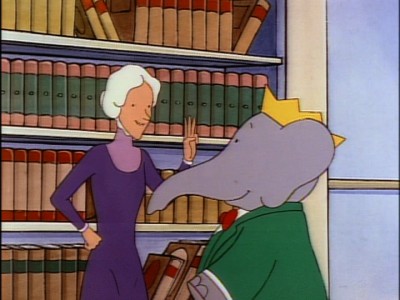 
Babar is a children's program based upon the acclaimed children's books by Jean and Laurent de Brunhoff. The series follows the adventures of the king elephant Babar, in addition to his family and extended tree of friends. This marvelous program is worth exploration and parents are strongly encouraged to share this gem with the children.

Babar is the central character as the lovable king elephant with years of wisdom to share with those who surround him (including his loving children). Babar married to the equally enchanting Celeste, who provides guidance and love to their wonderful children and to the people of the peaceful kingdom. Pom, Flora, Alexander, and Isabelle are their four children who each have wonderful and uniquely spirited personalities.

Madame is a wise, gentle, kind, and loving elderly lady who helped raise Babar as a young elephant and taught the elephant many of the important life lessons he grew to recognize as essential. Other characters include the comical monkey Zephir, intelligent Cornelius, kingdom advisor Pompadour, and Rataxes, who leads the kingdom Rhinoland which is constantly a society coming into some kind of minor conflict with Babar's kingdom. 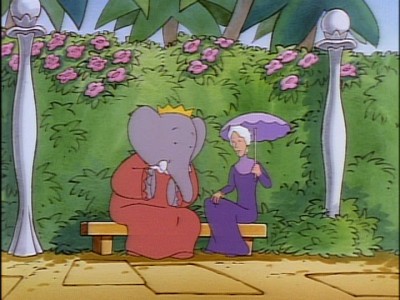 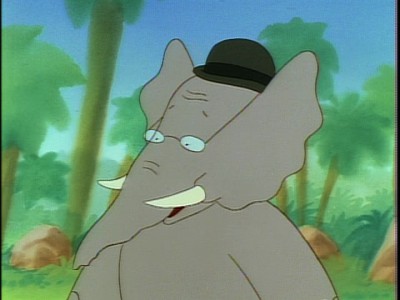 The series was created in 1989. These stories have been told over the course of six seasons that spanned from the original broadcast year of 1989 to 2000. Many of the stories can be seen as being primarily utilized to share important lessons with youth.  Lessons in life can share great thematic elements with young children, in a way that can be understood and appreciated throughout life. Babar always seemed to be a program that considered that aspect one of its mainstay goals.

The animation is sweetly simplistic with a maturity in style that also brings forth an element of sophistication. That description's a good way to examine the carefully nuanced animation, which is constantly beautifully drawn, expertly animated in every possible way, and brought to life as only truly gifted animators can accomplish. The character designs are memorable; the backgrounds often limited except when lush briefly displayed detailed settings come on screen and elevate the material.

This is one of those children's programs that can even be a good series for adults to watch from along with the kids.  It is so well made and provides so much educational value that it's no wonder that Babar is now referred to as The Classic Series (as the DVD release has proclaimed over the title artwork). Babar is one of the most beloved children's programs to date and it will remain as such with its always worthwhile stories to share with viewers of all ages.

The series has a simple storytelling approach and yet it never addresses simple issues. The format of the scripts is delicately balanced so as to be educational for young audiences and at the same time both direct and entertaining. The themes addressed are a great way for a viewing audience to become more familiar with the unique educational approach.

Babar is a marvelous program for young audiences and it made a huge impact upon the TV world of children's series during the years it was on air as a new television program, and it has remained a well-spirited story worth sharing with others. 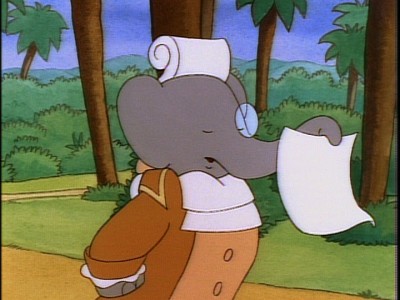 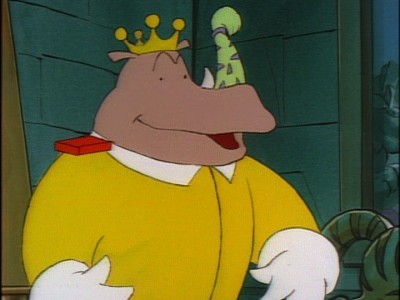 Longtime fans of the beloved program can finally let out a sigh of relief in knowing that the company entertainmentOne has begun releasing Babar in full season sets. That is what all fans like myself wanted for the series and it is finally being treated with some degree of importance by receiving in-order release. Babar is a true classic in animated television.

The best thing about the introductory season is that you get to experience the formation of the show in a way that you simply cannot experience simply by tuning in to any random or out of sequence episode the series produced in later seasons. Getting to know the way in which Babar first became King, how he met Madame, and other details related to how an entirely magical show like this became a classic is part of the fun in seeing the beginning.

While it's true that the series doesn't follow much of an ongoing storyline there are some details that can only be fully appreciated in the full season format. Make no mistake: the series is best viewed this way.

While two of the episodes included on a prior volume release make it over to this release, fans shouldn't be disappointed seeing as how the potential for season sets was previously unclear and it obviously wouldn't have made sense for the company to NOT include these season one episodes just because they were on a previous compilation. For the record, it was the City Ways and An Elephant's Best Friend episodes from the Best Friends Forever volume that were season one episodes.

Considering the low price point and the high-quota of classic television found on this DVD release make sure to consider purchasing the set if you are a fan of the lovable elephants from Babar's kingdom. It's a great way to revisit memories and make new ones with any family members who may have missed out the first time around.

The included episodes are: Babar's First Step, City Ways, Babar Returns, The City of Elephants, Babar's Triumph, Babar's Choice, Race to the Moon, No Place Like Home, An Elephant's Best Friend, The Show Must Go On, To Duet or Not to Duet, The Missing, Crown Affair, and The Phantom. 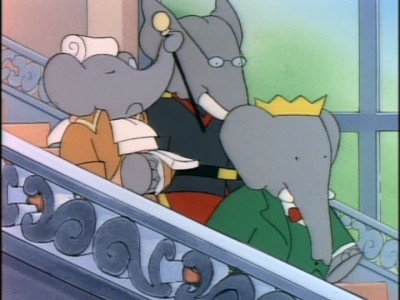 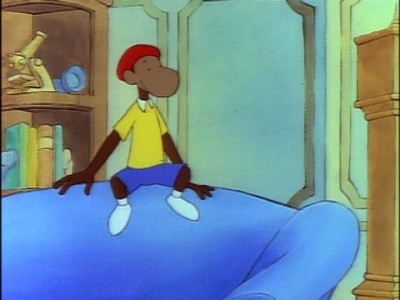 Babar is presented with a 1.33:1 full frame image that preserves the original broadcast aspect ratio. The DVD promotes the video as digitally restored and remastered but this series still seems to have shown some aging without an entirely dedicated restoration.

The animation seems more dated on the first season collection than on the volumes. The animation is dull in color. This set's promotion of restoration indicates that perhaps the source materials were in awful shape for these releases to be considered as improved. Nothing about this release would indicate that a restoration was done besides the box claiming that the series received restoration.

Colors are somewhat muted and there are interlacing issues that can be a distraction. Inconsistency in image stability is also a minor issue. The overall PQ isn't terrible but nothing resembles a truly impressive presentation in this department and fans might consider this disappointing but still watchable.

There are three audio options available (each presented in 2.0 Dolby Digital Stereo): English, Spanish, and French. No subtitles are provided.

The sound quality compares similarity to the video quality in that there isn't a lot of strength in dynamics or in the range of the sound clarity but that the dialogue reproduction is easy enough to follow. The show may not have a great presentation but it is still "watchable" nonetheless - There aren't many sounds used as effects but the always soothing and melodic score is one of the trademarks of Babar and sounds reasonably good on this release.

The individual volumes contained short Babar coloring books and were otherwise lacking any extra bonus material. This season set skips the coloring book and doesn't include a single extra at all. 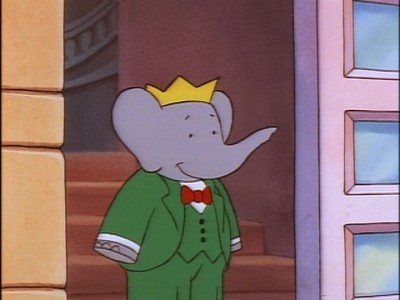 This is exactly what I hoped would happen with Babar on DVD: the release of full season sets. I had given positive reviews to the individual volumes despite my preference for an entire season release format. I had hoped to see each season be preserved on DVD. The series deserved to be given that sort of release pattern. And... here it is. Fans can at last rejoice!