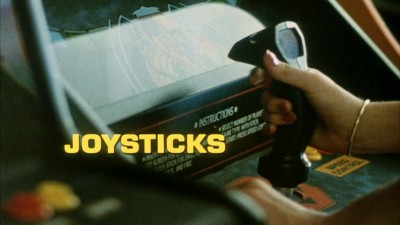 
The Story So Far...
Directed by low-budget indie auteur Greydon Clark, Joysticks is one of the lesser-known '80s teen comedies, telling the tale of Jeff Bailey and his grandfather's popular video-game arcade, which is under fire from concerned parents. But at the time, the film was rather popular in theaters, with the second biggest debut gross of its opening weekend. Liberation Entertainment released the film on DVD in 2006, but it was reportedly pulled due to rights issues, and has been out of print for some time.

The Movie
There's an innocence to the teen comedies of the '80s that's not entirely earned, but it lives on, as the time seems so much simpler in hindsight. Try to pull off half the shenanigans seen in movies like Revenge of the Nerds or Meatballs in a modern film and you have to deal with a far more sensitive, PC world. And thanks to the internet and its preponderance of free porn, there's a lot less of a cheap thrill in seeing a few well-placed bare breasts in a teen comedy these days. So we'll probably never see a return of this genre to its '80s heights, and will have to settle for revisiting the teen sex comedies of the past, like Joysticks, which offers the twin nostalgic treats of early video games and '80s T&A.

Jeff Bailey (Scott McGinnis) is running his grandfather's popular arcade, with help from fat reprobate Dorfus (Jack Black/John Belushi hybrid Jim Greenleaf) and nerdy new hire Eugene (Leif Green), when he runs afoul of local businessman Joseph Rutter (Walking Tall's Joe Don Baker.) The problem is, his daughter Patsy (Corinne Bohrer) spends too much time there, hanging with the wrong element. Thus, he decides to get the place shut down through any nefarious plans possible. There may be some other reason for his quest (normally they involve some sort of land grab) but it may have just been the general fear that video games strike into the heart of the elderly. Either way, Jeff is soon trying to stop the efforts of Rutter's moronic nephews and the stereotypically punk King Vidiot (Jonathan Gries) in order to preserve their beloved arcade. 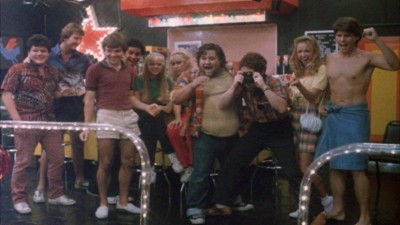 Along the way, when they aren't forcing the requisite boob shots in for no real reason (like an over-enthusiastic round of strip video games), the three (THREE!) writers work in a subplot about why Jeff doesn't play the video games he manages, a cliche story about Jeff's rival's amorous spouse, and some rather ridiculous montages, like any good '80s film. Ridiculous is a good word to use in describing this film, as it just gets silly way too often. The behavior of Vidiot and his all-female gang is like something out of a Tim and Eric sketch, with nothing more ludicrous than when they are provided with "wheels" by Rutter. I love Gries as Lazlo Hollyfeld in Real Genius, but he's so over the top in this film, he's either awful or avant garde. It's actually hard to decide.

Bohrer, who most people recognize, if not adore from an array of '80s roles, brings one of the most obnoxious examples of the Valley Girl accent captured on film to the table, which, at the very least, makes for a memorable performance. (By the way, where did the Valley Girl accent go? It's basically disappeared from our civilization.) If anyone's performance is less than hoped for, and most acquit themselves well, it wouldn't be hard to place the blame on the script, which only offers up a few amusing exchanges (one scene between Baker and Gries that's actually quite funny, was ad-libbed.) It's mostly the B-grade exposition and reaction you'd expect. The bigger sin is in not knowing when to say when, as scenes dragged on, robbing them of humor, especially during the film's climax, which goes on forever. Considering the film only clocks in at 90 minutes, that points to excessive filler, and sadly, it rarely involved breasts. 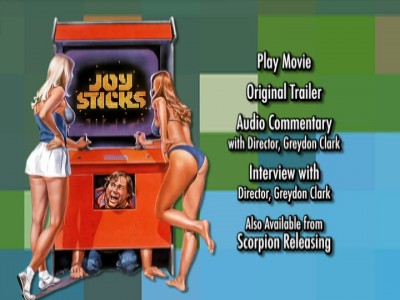 The DVD
The disc we received was a pre-retail screener, so there's no info about the packaging. The disc has a mildly animated full-frame main menu, with options to play the film and check out the special features. There are no audio options, no subtitles...there's not even a chapter selection menu.

The Quality
Note: We received a pre-retail screener, and thus cannot confirm the quality of the disc available in stores. If we receive a retail copy, this review will be updated.

The anamorphic widescreen transfer looks good for its age, but you're getting a soft image lacking in fine detail and black levels that rarely even touch black. Overall, the image is cleaner and more colorful than expected for a film of this age and budget. Though the image is mostly quite nice, when things go bad, they go very bad, as certain shots in scenes seem to taken from another source entirely, as they have much more dirt and almost an entirely different hue, looking as if it was shot through a greenish-red filter. On the plus side, comparing the the trailer and the film shows how bad it could have looked.

The Dolby Digital 2.0 track does its job, but don't expect to be impressed, as it's just a simple center-balanced presentation that keeps the dialogue mostly clear, though it lacks a lot of separation from the music and sound effects (to the point where one Valley Girl rant by Bohrer was basically just gibberish.) Sadly, there are no issues of clarity with the godawful theme song, which presents the lyrics "totally awesome video game" free of any irony.

The Extras
Credit has to be given to Scorpion Releasing for including a few extras with this release. starting with an audio commentary with the director. Clark is far from the most energetic speaker, and he leaves large gaps of dead air, which makes it a tough listen. When he is talking though, he provides some interesting behind the scenes notes and some low-budget technical tips, though how many of them are true is up for debate, as he repeatedly mentions talking to Nintendo, though there are no Nintendo properties in the film.

There's more from Clark in a 17:38 interview, where he talks a bit about the film's popularity and financial problems, as well as how he's financed his films. This one is more about Clark, covering his post Joysticks-career and the famous people he's worked with over the years. The financing info is probably the most interesting part, as it gives a look inside how indie films get made.

The remaining extra is the film's original theatrical trailer, which is in really rough shape. However, if a modern studio film released a trailer like this, I would line-up first day to reward the audacity. There are a few additional trailers from Scorpion Releasing for films that seem to be worth a look. 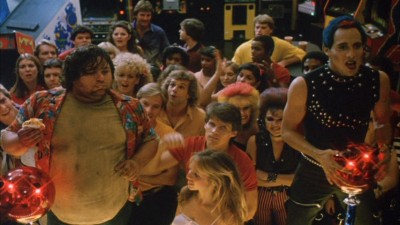 The Bottom Line
By no stretch of the imagination is Joysticks a good movie, but its certainly interesting to watch as one of the first films to depict the video-game culture, and an early warehouse of many '80s cliches. Some tighter pacing and some good dialogue and this could have been one of those late-night HBO regulars that a generation of adolescent boys embraced. As it is, it's an entertaining product of its time, with a few extras to enhance your experience. Give it a look if you enjoy movies like Stewardess School.