The Criterion Collection // Unrated // September 18, 2012
List Price: $39.95 [Buy now and save at Amazon]
Review by Stuart Galbraith IV | posted October 17, 2012 | E-mail the Author
Of movies that routinely make any serious list of the 50 Greatest Films of All-Time, Children of Paradise (Les enfants du paradis, 1945) was the only invariable contender that I had not seen until now, a phenomenon strangely common in the case of director Marcel Carné's masterpiece. Its three-hour-plus running time, coupled with generally poor theatrical release prints and home video versions was a factor, but also its fame among cinema elitists put me off. For decades, Children of Paradise was regarded among the artiest of art house films. Film snobs who rarely took Hollywood films seriously became proprietary toward French filmmakers like Marcel Carné and Rene Clair, as well as the French films of Max Ophüls, that such films expressed poetry beyond the understanding of the great unwashed. This had the unfortunate effect of making movies as eminently accessible and engrossing as Children of Paradise seem like homework.

Criterion's new Blu-ray of Children of Paradise goes a long way to make it much more accessible and richly enjoyable than ever before. The transfer comes from a positively gorgeous restoration Pathé gave the film last year, one that mainly sources the 35mm nitrate camera negative, reportedly in poor condition, and two fine-grain positives. While the quality of the image and sound vary slightly throughout, this Children of Paradise never looks less than extremely good and, most of the time, is positively gorgeous. Some of the extra features are carryovers from a comprehensive 2002 DVD release, but fascinating new material has been added. 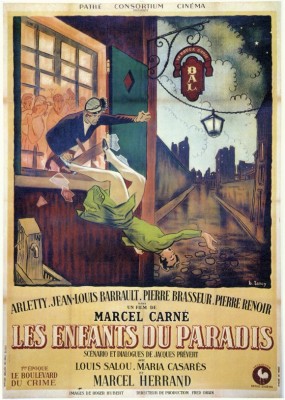 The 190-minute Children of Paradise is actually divided into two stand-alone films, "The Boulevard of Crime" and "The Man in White," the latter beginning with its own set of main titles and beginning a recap of Part One.

"The Boulevard of Crime" refers to the Boulevard du Temple, Paris's lively theater district during the 1830s and '40s in which the film is set. The story revolves around Garance (Arletty), an enigmatic free spirit who accepts what life gives her, and is content to share her gift of beauty to others (i.e., exploit her body) while making no promises to men unlucky enough to fall for her.

And, revolving around Garance, are four very different men who fall in love with her for different reasons, and in very different ways. Frédérick Lemaître (Pierre Brasseur) is an ambitious actor, gregarious dandy, and unapologetic womanizer satisfied with the noncommittal nature of his relationship with Garance. Pierre-François Lacenaire (Marcel Herrand), an articulate scrivener, conceited thief, and coded bisexual (or homosexual), he recognizes in Garance a fellow societal outcast that he admires for her strength and effortless eloquence, attributes which he regards as equal to his own. Gentle, almost feminine Mime Baptiste Debureau (Jean-Louis Barrault) naively idealizes and idolizes Garance (on stage after joining the troupe, she's seen literally on a pedestal) and his obsession for her coincides with a unique fame on the stage and a fruitful personal life that he's unable to enjoy. Later, the Count Édouard de Montray (Louis Salou), in a lesser role, comes to regard Garance as something of a trophy wife, while she regards him as a mere convenience.

While for me personally not the revelatory experience of the other greatest of great films (Citizen Kane, 2001: A Space Odyssey, Seven Samurai, etc.), Children of Paradise dazzles in myriad other ways. Visually the film is stunning throughout, vividly recreating the world of theater as it existed in Paris 175 years ago. The Boulevard itself, a massive set built in Nice, positively overwhelms the viewer, particularly in high-definition where the hundreds of costumed extras and their varied wares all beg for attention. The backstage scenes are predictably chaotic and colorful, but Carné gives equal weight to the theaters' crowded auditoriums and multiple galleries, the highest (and cheapest) of seats being the source for the film's title. An American trailer included as an extra feature calls Children of Paradise France's answer to Gone with the Wind, a ludicrous comparison, except perhaps in terms of its similar lavish attention to detail in its art direction and costuming. The film has a deliberate dream-like quality throughout, a vivid recreation of a time and people since turned to dust.

The high-definition restoration is breathtaking. Many shots, such as a morning duel sequence photographed with the participants arriving, with branchy trees nearly silhouetted by the rising sun, are indescribably beautiful. Even March 1945 audiences didn't get to see a Children of Paradise that looked this good.

The film is intelligent and witty, with especially droll and observant dialogue, intelligently translated into English for maximum effect. In his video introduction director Terry Gilliam points out that such poetry in a big studio Hollywood films was an alien concept but, at the time, not so in Europe. It's certainly true that Children of Paradise is in many respects much closer to, say, Michael Powell and Emeric Pressburger's The Red Shoes than anything produced by David Selznick. Gilliam also makes an absolutely vital point about the importance the film places on smiles: from Garance's Mona Lisa-like one, to the marvelous exchange Frédérick has with her as they speak wistfully about the ability of their audiences to smile or laugh uninhibitedly, something they've lost over time.

It's also more subtle and adult than contemporary Hollywood films. Beyond the coded homosexuality of Pierre-François (and his theater-loving henchman, Avril) the sexual ambiguity of Baptiste, and its matter-of-fact attitude toward Garance and her use of her body, the picture constantly impresses with its unpredictability: the sympathy one feels toward Pierre-François by the end of the film; Frédérick's completely unexpected response to the former's nighttime confrontation; Frédérick's later refusal to be rattled by Count de Montray's brash insults; the ambiguous, unresolved conclusion; and on and on.

Children of Paradise's backstory adds to its fascination. It was made during the German Occupation, with the "clandestine participation" (so say the credits) of two Jews in key roles: set designer Alexandre Trauner and composer Joseph Kosma. Nazi collaborator Robert Le Vigan was replaced midway through production, while Arletty, secretly dating a German Luftwaffe officer, was under house arrest and unable to attend the film's premiere. ("My heart is French," she said at the time, "But my ass is international.") Although material was widely available to provide for the film's hundreds of elaborate period costumes, food was in such short supply that a chicken leg actor Brasseur casually eats in one scene had to be acquired through the black market.

As described in more detail above, Children of Paradise is a revelation on Blu-ray. The film can at last be enjoyed in a form better than audiences have ever seen it, as an accompanying restoration demonstration makes plain, as well as pre-title notes do in defining its restoration challenges and goals. The uncompressed monophonic audio, in French only with English subtitles, similarly varies but never sounds less than good. The disc is region A encoded.

Children of Paradise is presented across two Blu-ray discs. The first disc includes the movie plus audio commentaries by film scholars Brian Stonehill and Charles Affron. Disc Two finds Terry Gilliam's video introduction (best watched after the film and not before); the aforementioned restoration demonstration; a U.S. release trailer; "Once Upon a Time: 'Children of Paradise,'" an excellent 52-minute documentary from 2009; a 1967 documentary called "The Birth of 'Children of Paradise,' that intriguingly intertwines interviews with the original cast and crew with leading lights of the French New Wave; and a fat, 40-page booklet featuring several essays and other valuable information.

One of the year's major releases, Criterion's Children of Paradise is a DVD Talk Collector Series Title.