The Movie
On any average day, if you asked me what David Fincher's first film was, I would probably say The Game. Se7en, his real first film (let's all forget Alien3, since Fincher certainly would like to), is such a fully-realized blast of cinematic brilliance that The Game feels like it belongs earlier in his filmography, even if only by one title. That's not meant to take anything away from The Game, which is a fine, nay great movie. Se7en is just way too incredible to be the work of a director getting the opportunity to fully take the reigns on a film for the first time.

But let's get back to this movie, which made it clear that Fincher was no one-trick pony. The story of Nicholas Van Orten (Michael Douglas) is a twist-laden thriller that manages to put the audience directly in the protagonist's shoes, as neither knows what is real and what they can trust. Given a gift by his wayward brother Conrad (Sean Penn), wealthy investment banker Nicholas finds himself in the middle of a strange "game" that injects some excitement into his very controlled life, with keys, chases and odd occurrences. But the game quickly gets out of hand, and he has to figure out what's happening and who's responsible, as he finds his life at risk from unseen forces. He doesn't have a lot of help though, as it seems everyone is plotting against him. 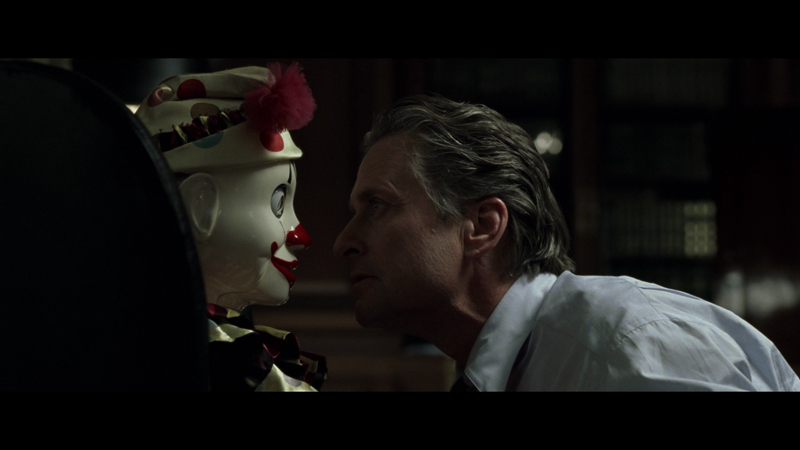 As you try to suss out just exactly what's going on, there will be some nagging plot points that are easily explained away (or ignored via a suspension of disbelief) by the time the credits roll. These questions of logic will become more of an issue on repeated viewings though, when the movie becomes something entirely different. Knowing the secret, you become more of an investigator, pulling together clues and piecing together how the story played out, armed with the reasoning of the finale (depending on how you take it.) It's on your second, third or any further viewing that you start wondering just how real the story's plot could be, particularly during the film's large climax, which is more of a plot gaping chasm than a plot hole. Of course, it's hard for any film's plot to hold up to such scrutiny, but it's odd how cruel the game can be to Nicholas

The Game boasts several similarities to Fight Club, the next masterpiece Fincher would craft, as Nicholas, who has no wants in life, but also no appreciation for his elegant means, is taught the value of his comfy existence by having it stripped away. Douglas was a perfect choice for the role, as few actors can play both ends of the stress spectrum the way he can, as anyone who has watched Falling Down can attest to. Going from a straight-laced businessman to a groveling street denizen without overdoing it is a task for any actor, but Douglas shows his mastery of the material, especially when he desperately addresses the patrons of a restaurant, looking for a little help. Compare it with the film's early scenes to see an example of just how good Douglas is.

Of course, as enjoyable as Douglass is, this is a Fincher film, and he's the key. The Game is loaded with the visual beauty you expect from the director (aided by DP Harris Sevides.) There are so many poster-worthy frames in this film, pacing out tension-packed sequences, but you might wonder if a more naturalistic, "found footage" look would have sold the film's feeling of realism more. However, that would have robbed us of a gorgeous movie (one whose shots are echoed in Fincher's later Zodiac and The Girl with the Dragon Tattoo). 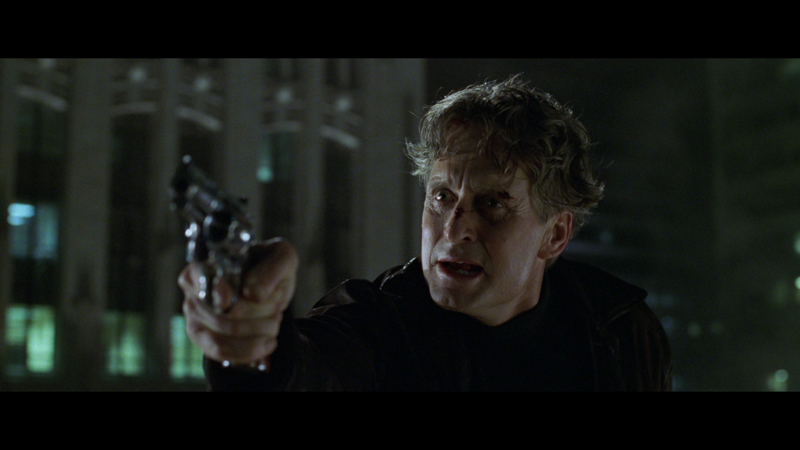 The Disc
The film arrives on a single Blu-Ray disc, which is in a clear Blu-Ray keepcase with a dual-sided cover. The disc sports the standard, beautiful Criterion Blu-Ray menu, with options to watch the film, select scenes, adjust the set-up and check out the extras. Audio options include theatrical and near-field English DTS-HD Master Audio 5.1 tracks, while subtitles are available in English.

The Quality
Watching the 2002 DVD release before viewing this Blu-Ray release is the best way to appreciate how beautiful this 2.40:1 1080p AVC-encoded transfer is. The image is sharp (but not overly so) and loaded with detail, thanks to a clean-up approved by Fincher under the supervision of Savides. Color is natural throughout, hammering home the temperature changes that help define Van Orten's world, and black levels are solid throughout, which is important for a film that's frequently quite dark. There are no noticeable issues with digital distractions or any real dirt or damage. The scenes in Van Orten's home with his unplanned redecorating really look terrific in this release, and the shot of the puppet in his living room is one of the most gorgeously clean and detailed shots I may have ever seen.

There are two options for audio on this disc, with a Theatrical DTS-HD Master Audio 5.1 track and a Near Field DTS-HD Master Audio 5.1 track, which was created for the film's original laserdisc release to fit home theaters better. While the film's dialogue and sound effects sound great, if anything stands out above the rest, it's Howard Shore's score. The mix does such a terrific job of separating out the elements that it really enhances the feel and atmosphere, with the strings filling the surround speakers and the piano stabbing out from the center channel, making them as powerful as dialogue. The near field track has some definite adjustments versus the theatrical (check out the aforementioned scene in Van Orten's mansion with sound of Jefferson Airplane's "White Rabbit" changing as he moves from room to room to appreciate the subtle differences. )

The Extras
All of the on-disc extras are carried over from the original Criterion Collection laserdisc, starting with an audio commentary featuring Fincher, Douglas, writers John Brancato and Michael Ferris, DP Harris Savides, production designer Jeffrey Beecroft and visual effects supervisor Kevin Haug. The participants, with the exception of the writers, were recorded separately, and edited together, with a host occasionally reminding you who's speaking. Normally, I prefer commentators to be together when talking, but the result of the editing is an intensely dense and info-filled track that covers a little bit of everything, including a nice mix of discussion about art and technique (like how the pan & scan version of the film is almost a different movie), along with plenty of info about the film's development, such as some rather large changes from the original script. It's a fascinating look at the movie and Fincher is fun to listen to as usual.

An alternate ending of the movie (1:11) is available, complete with the slate and Fincher's direction. Thankfully, this was left on the cutting room floor, as the ending in the film is far more in keeping with the film's tone, and puts a proper bow on the movie.

There's a set of comparisons for four major set pieces, between the film and the storyboards (and in one case on-set scouting photographs) created during pre-production, showing the art in split-screen with the final film. The boards are gorgeous and detailed, but it's most interesting to see where changes were made by Fincher, who's known to be a major planner. There are also five behind-the-scenes footage montages (totaling over 38 minutes in all) for the same four set pieces, along with a more random look at the production. These bits include optional audio commentary by Fincher, Douglas, Savises, Beecroft and Haug, which ranges from talk of cut scenes and story theories to production details and the origin of "Fincherballs." All in all, a healthy addition of insight to the commentary.

The psychological test film shown to Nicholas at CRS is included in its entirety here, without any sound. It's not the most mindblowing montage of footage, but it's not entirely comfortable either. Including it was a nice touch, though a commentary explaining it would have been even better.

The film's teaser (along with a test render of it) and trailer are included, with optional commentary by digital animator Richard "Dr." Baily on the teasers and Fincher on the trailer. While Baily focuses on the technical challenges of the gorgeously minimal teaser, Fincher spends his time sharing his thoughts on trailers and what's wrong with them.

As usual for Criterion releases, there's a booklet in the package, an understated 20-pager with a chapter list, details on the disc's specs, stills and an essay by film critic David Sterritt. Sterritt tries to find connections and influences everywhere in the film, though some, like the main character sharing part of his last name (not even the whole last name) with a British playwright, feel like pretty big reaches. 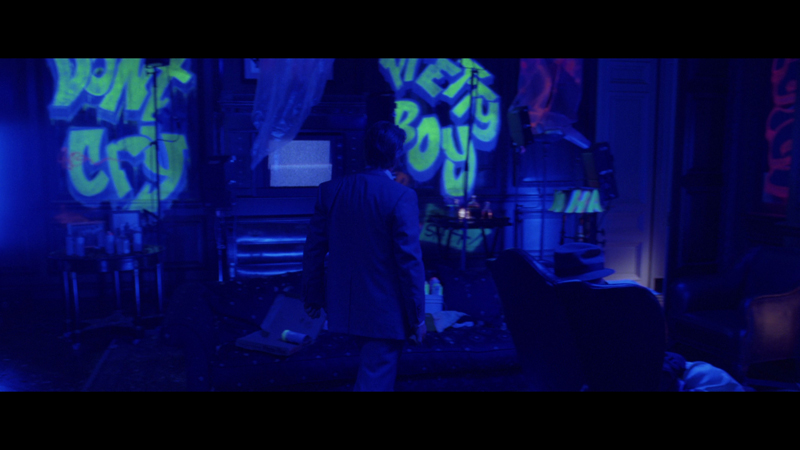 The Bottom Line
Though it was just his second film (ignoring his mercenary debut on Alien3 ) The Game is a amalgam of everything Fincher has shown as an artist, combining themes and visuals that have marked his work in the years since, in an outstandingly tense thriller. Finally returning to the Criterion Collection, it's received the home video release it deserves, looking remarkably better than it ever has, while bringing back the informative extras that have been out of print for so long (though nothing new has been added outside of the well-designed booklet.) Fincher fans should have their money in hand, ready to add this Blu-Ray to their collection, while newcomers should dive in for an excellent cinematic experience.