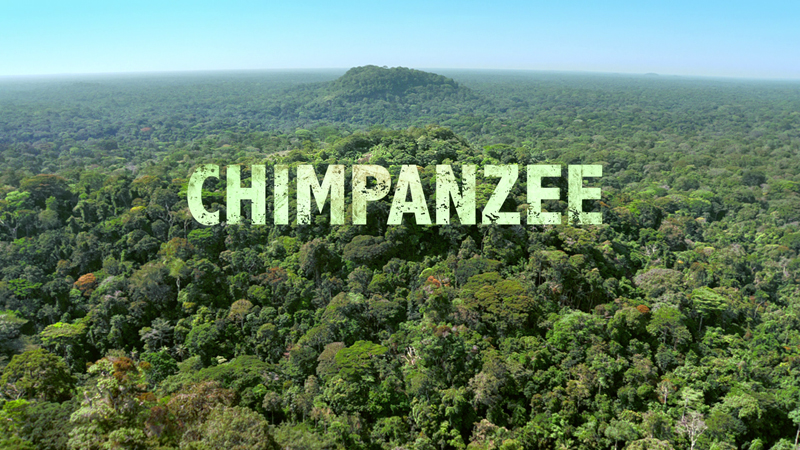 
The Movie
Animals are amazing, beautiful creatures. Despite lacking a lot of the elements of civilized society that humans enjoy, they are capable of much of the same behavior, but since we tend to see them in zoo settings, we can't really experience their world in a natural way. Thankfully, talented, dedicated documentarians help us explore worlds we'd otherwise never know. Thus is the case with Chimpanzee, which puts viewers right alongside a tribe of simians, so they can experience a different way of life, namely that of Oscar, a baby chimp who lives a unique life in the jungles of western Africa.

The latest in DisneyNature line of documentaries, Chimpanzee tells the tale of an infant chimp and his life with his mother up until an attack by a rival group of chimps leaves him an orphan (like so many classic Disney heroes.) At that point, his struggles to survive become the core of the film, along with his relationship with his chimp family's leader, Freddy. It's incredibly moving to see how he learns to care for himself, how his life changes and how the chimps take care of each other. It's not all dramatic and emotional though, as you get to see some of the interplay between the chimps and their sometimes silly activities, which lightens up the proceedings between the darker elements. 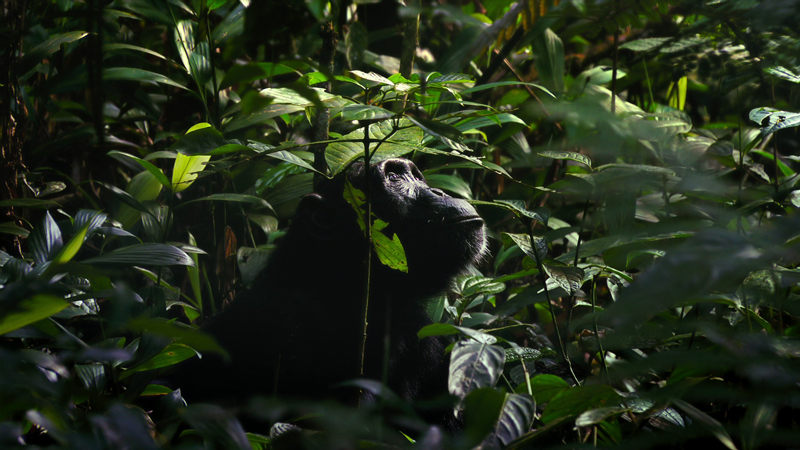 Another major part of the documentary is the battle for territory between Freddy's group and a rival band of marauders led by a chimp named Scar. I don't believe I've even seen an honest-to-goodness chimp fight before, but the scenes of Scar's attacks are incredibly intense, and are as exciting and fast-paced as any kung-fu movie fight scene. Thought the film tries to establish some internal conflict among Scar's team, their role as invaders makes them classic bad guys, and when you pit them against Oscar's family, it creates a great tale of "good vs. evil" that's more entertaining than most nature documentaries.

The film is presented with narration by Tim Allen, well-known to Disney fans either for his voice as Buzz Lightyear or as his role as Tim Taylor on Home Improvement. Allen bounces back and forth between the gravitas of his Chevrolet commercials and the goofiness of his "Tool Man" persona, complete with his trademark grunts at the sight of the chimps using tools to crack nuts. Though some have jumped on Allen for the sometimes cheesy nature of his lines (and I did think his narration for the climactic battle of the film was a bit light), but one has to believe he's there mainly to explain to younger viewers in the audience what exactly is going on. His narration isn't exactly needed, and giving the chimps names like Oscar and Scar is Disney through and through, but in the end, they don't take away from a wonderful story full of gorgeous eye candy. They just let more people enjoy it.

(Note to parents: there are a few moments of intensity, including the big fight scenes, the death of one of the main chimps (not seen) and a hunt for food that results in the death of another animal (partially seen.) The film handles it pretty gently, but the outcomes aren't ignored.) 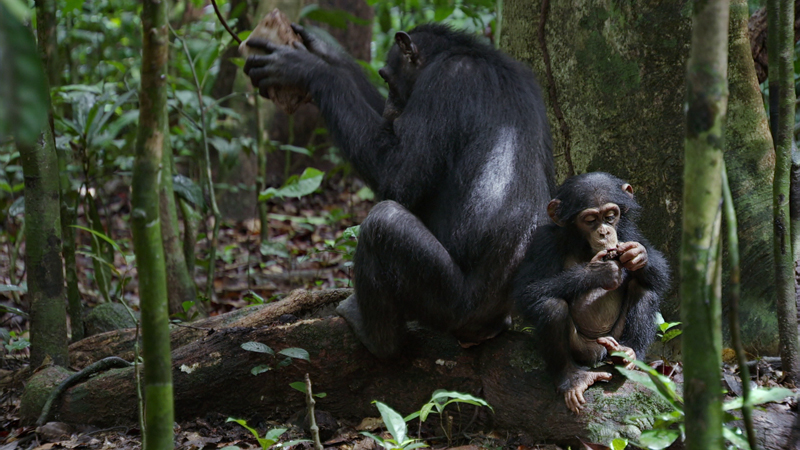 The Discs
The film arrives in a two-disc set, with a Blu-Ray and DVD, which are packed in a standard-width dual-hubbed Blu-Ray keepcase (in a foil-embossed slipcover.) The Blu-Ray has an animated menu, with options to watch the film, select scenes, adjust the set-up and check out the extras. Audio options include an English DTS-HD Master Audio 5.1 original theater mix track, an English DTS 5.1 home theater mix, along with an English Dolby Digital 2.0 Descriptive Video Service track and Dolby Digital 5.1 French and Spanish tracks, while subtitles are available in English SDH, French and Spanish.

The Quality
Delivered with 1080p AVC-encoded transfer Chimpanzee is absolutely breathtaking. The level of fine detail and the lush, vibrant colors combine to give you a look at chimpanzees you've likely never experienced. Seriously, seeing the details on their faces and the fine hairs on their bodies, none of which is marred by any kind of digital distraction, gives you a new appreciation for nature. That goes double when you see the small details of plants and insects or the stunning landscapes of the jungle, including a lightning storm that just unbelievable. It's so incredibly gorgeous, one is tempted to say this movie was made with CGI.

The DTS-HD Master Audio 5.1 soundtrack is just as outstanding as the video, putting you right in the middle of the jungle with the chimps, via outstanding directionality and wonderful atmospheric effects in the side and rear speakers. Allen's narration, along with some key audio of the chimps, sits front and center, and is clear and strong, while the bold score envelopes you from all around the room. This is a reference-quality disc all-around. (Note: The home theater mix is such a step down from the theater mix, it's not worth even listening to.)

The Extras
The Blu-Ray exclusive extras start with "On Location: The Making of Chimpanzee," a nearly 39-minute, seven-part featurette on the film's lengthy and difficult production, which gives you an in-depth look at how the film was captured and more insight into the world of the chimps from experts involved in the film. Anyone thinking about going into this field should give this a good look, as it's a pretty harrowing way to make art and make a living, especially the segments on the bees that are seemingly everywhere, at one point coating a cameraman in a layer of bees, and the insects and creatures making their way into their camp (Google whip scorpion if you are low on nightmare fuel.) All this needs is Werner Herzog (consultant Christophe Boesch comes close) and you've got something close to Burden of Dreams.

Far less epic in scale is the music video for "Rise," performed by Disney Friends for Change, featuring the McClain Sisters, an R&B trio of sisters featuring a star from the Disney Channel series A.N.T. Farm. It's a decent, if unremarkable inspirational-style song. If you like, you can spend 1:17 on the set of the video with "Behind the Scenes of 'Rise,'" thought don't expect to learn a lot, as most of the clip is about the movie the song appears in.

The remaining extras are available on both the Blu-Ray and the DVD, starting with "See Chimpanzee, Save Chimpanzees" (3:13), an explanation of the fund-raising effort built around the movie, in which DisneyNature donated a portion of the film's sales to protecting chimps. There's more about the company's efforts to help the world in a promo about Disney's Conservation Legacy (1:48). Despite the syrupy promotional nature of the piece, it's hard to get down on the company for doing something right like this. The same goes for the even shorter "Disney's Friends for Change," (:47) in which the McClain sisters promote the program's efforts to inspire kids to do good. 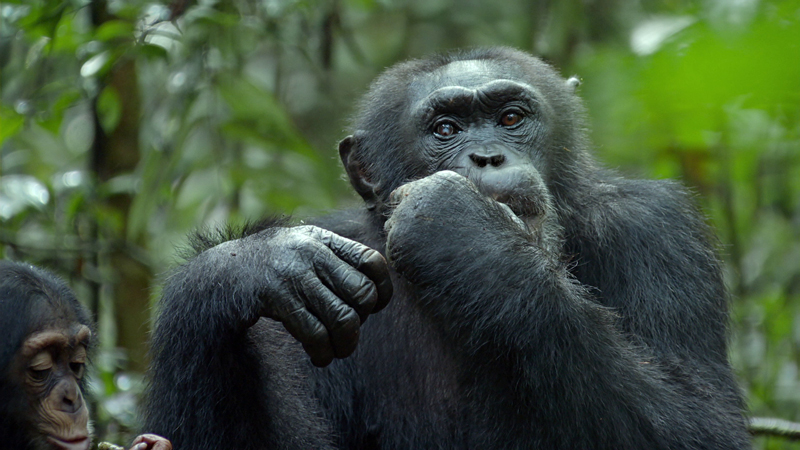 The Bottom Line
I like a good nature documentary, but I know I'm far from normal. That said, this is the kind of nature documentary anyone can enjoy, thanks to a crystal-clear narrative that's consistently engrossing and Allen's hand-holding narration. The Blu-Ray offers up the film in immaculate quality, and tosses in some excellent extras, making this a set that everyone should add to their collection.